For this listener, the new album by Hobbs’ Angel of Death has been an enormous surprise. From song to song, my smile grew wider and wider when I first heard it, my eyes popping bigger and bigger until I began to fear they’d rocket out of my head and explode against the wall in smears of jelly. The thing is a pure rush of molten metal guitar gold.

I’m sure one reason why the album came as such a huge surprise was that, unlike many of you out there, I was unfamiliar with Peter Hobbs’ history during metal’s glory years in the ’80s, perhaps because bands from Australia in those days labored mainly in the deep underground as compared to their European and North American counterparts.

I’ve learned that his band released two demos in 1987 (Angel of Death and Virgin Metal Invasion From Down Under) and then a self-titled debut album in 1988 on the Steamhammer label. Seven years passed before a second album would emerge (1995’s Inheritance), and then the band broke up.

Hobbs re-formed the band seven more years later, and there have been sporadic festival and tour appearances since then, but only now has Hobbs’ Angel of Death produced an album of brand new music, more than 20 years after the last one. The album’s name is Heaven Bled, and it will be released by Hells Headbangers on October 14. 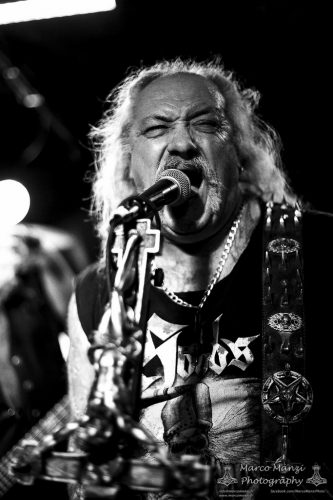 There is more enthusiasm, spirit, and both songwriting and performance skill than you’ll find on most current thrash albums created by musicians half Peter Hobbs’ age — and a hell of a lot more than some of the biggest metal names from the ’80s who are just phoning it in, between shopping trips on Rodeo Drive. It’s as if the man has been reborn, but with all of his knowledge and skills fully intact.

Hobbs is also, obviously, a good judge of talent. On this new album he’s backed by some very able allies — lead guitarist Simon Wizen, bassist Alessio “CANE” Medici, and drummer Iago Bruchi — with Hobbs himself on guitar and behind the mic.

I was given my choice of songs to premiere from Heaven Bled. Giving me that discretion turned out to be a form of cruelty. There is no obvious stand-out track on the album — all of them are electrifying, and while thrash is the backbone of the album, the songs weren’t built on an assembly line. They’re all different enough from each other that the full-album ride is a consistently interesting experience. Just waiting to see how Hobbs is going to change things up on the next track is a kick, to find out which classic influences he’s going to weave into the next song.

The song begins in violent and dramatic fashion, sounding perhaps more like blasting black metal than anything else, and then it begins to transform and alternate with a galloping, warlike, heroic, melodic guitar passage — eventually highlighted by magnificent, echoing solos.

By this point in the song you may be wondering where all the death/thrash is… but I did tell you that Hobbs isn’t stuck in one lane of heavy metal on this album, and this particular song goes for epic heights… and succeeds.

Also, if you let the player below continue to run, you’ll hear a second song, “Son of God”, which will thrash your reproductive organs off.

And now here’s a statement about the album from Peter Hobbs, followed by a bunch of links — and our premiere of “Walk My Path“.

“With HOBBS’ new album, I’ve tried to cater for a wider majority of metal lovers, giving a variety across the board with old-school feel and arrangements, but with a mature HOBBS’ ANGEL OF DEATH outlook. I’m sure many will find it an enjoyable album to listen to, showing my writing skills on the new album and giving back to the industry some of the great influences that have won me over the past lot of years. I’ve been fortunate enough to have met some of the greats I have the utmost admiration for, and it’s a honor for me to hear it in return. I’ve met people through my travels, and especially one that I felt so overwhelming to hear that my now-cult album of 28 years ago actually saved someone from committing suicide, and they thanked me for my music, that it pulled him through that rough time! I know that I can’t please everyone, but I have given this new album my heart and soul to accomplished another cult album in years to come!”

8 Responses to “AN NCS PREMIERE: HOBBS’ ANGEL OF DEATH — “WALK MY PATH””