Yesterday I provided a teaser about the subject of today’s look back into metal’s past. I discovered this band and their two demos from the ’90s through a YouTube link to the song I streamed in yesterday’s post, which popped up in a Facebook conversation between a well-known underground label owner and an even more well-known musician, both of whom have enough gray hair that they may actually have heard these demos around the time of their release.

The band in question is Cryptophobism, and they were from Varna, Bulgaria. Their two demos were released in 1993 and 1998; the first one was a recording of a rehearsal. The one I’m focusing on here is the 1998 demo, which contains four tracks totaling about 15 minutes, one of which also appeared on the rehearsal demo. 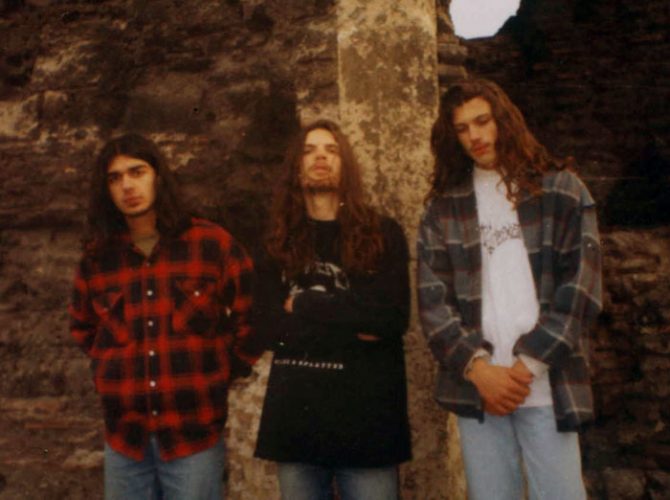 The song I heard on that YouTube clip is the opening track, “People That No-One Will Miss“, and man, I really can’t get enough of it. It is, first and foremost, absolutely crushing — slow, monolithic, and staggering under the weight of impending doom. The reverberating vocals are cavernous and horrifying, and the song also includes a guitar solo that slowly spins a bereaved melody which gives the song added depth and feeling.

The following track, “Accidental Suicide” oozes misery from every pore, while being just as effective at stomping your head into small fragments of bone and jelly. “Cave” ratchets up the tempo, just enough to give its mighty chugs a decimating, pile-driving impact, and when it really starts to rumble ahead, it brings to mind some titanic bulldozer powering straight through a mountain. The vocalist elevates to a frightening howl, while the solo in this one shrieks like a furious wraith.

Interestingly for this kind of titanic doom/death, both of these last two songs are relatively short, especially by current standards, but the production quality is up to modern standards for all three tracks — they sound immense. And so it’s a letdown to hear the final track, “Madhouse”, which sounds exactly like what it is — a rehearsal in a practice space. It’s still a good song — it just sounds thin compared to the mammoth trio that precede it.

This demo stands the test of time. I would never have guessed that it was released almost 20 years ago; if it had been released this year, I suspect it would have garnered its fair share of enthusiastic praise.

According to Metal-Archives, one of the members of Cryptophobism — guitarist Ivo Iliev founded a band named Darklight after the demise of Cryptophobism. Darklight has released three albums, and I’m curious to find out what they sound like. Their latest full-length, Closure, came out in 2014.

Below I’ve embedded the YouTube streams for the four tracks on Cryptophobism’s 1998 demo, in the order in which they appear. If you do a bit of googling, you’ll find a site where you can download it.

5 Responses to “THE REARVIEW MIRROR (CRYPTOPHOBISM)”