The year was 1996. Two years earlier, Mayhem had released De Mysteriis Dom Sathanas, Emperor had released In the Nightside Eclipse, and Darkthrone had discharged Transilvanian Hunger (following it in ’95 with Panzerfaust, which was the year when Dimmu Borgir released their debut album For all tid). In the wake of all those landmark releases in black metal’s surging second wave, another Norwegian band named Kvist (“twig”) put out their own debut full-length — For kunsten maa vi evig vike.

Unlike the previously mentioned bands, whose fame has persisted to this day, Kvist never put out another release, and at least so far as Metal-Archives discloses, none of its three members (vocalist/bassist Tom Hagen, guitarist/keyboardist Hallvard Wennersberg Hagen, and drummer Endre Bjotveit) went on to release music in any other metal band.

I discovered For kunsten maa vi evig vike only recently. Although I’m not going to make the argument (though I could, without embarrassment) that it should be accorded equal status with the albums named above, it’s very, very good — and it’s the subject of this Sunday’s backward look at metal from the past. 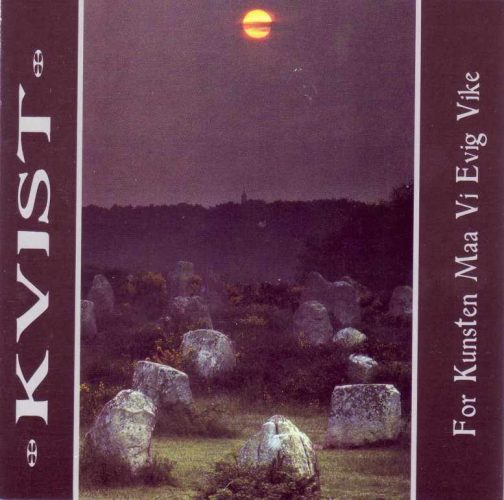 Of the six tracks on Kvist’s lone album, all of them are gems, from the shortest one (“Svartedal”) to the 10-minute multifaceted journey of “Min lekam er meg blott en byrde”. But just by way of introduction to this fine album, I’m going to focus only on two songs (for a full review of the album, I’d recommend this one by the irreplaceable autothrall at From the Dust Returned). I’ve included streams of both songs below, in addition to a full-album stream.

“Ars Manifestia” opens the album in stirring fashion. You get an immediate introduction to the prominence of the bass and the heaviness it lends the music right off the bat. You also get a fast introduction to Kvist’s ability to deliver hook-laden riffs, and at the 2:00 mark you hear the band’s judicious but very effective use of keyboards to expand the music into more majestic, atmospheric territory. And as the song moves on from there, you can appreciate both Bjotveit’s skill behind the kit and the appeal of the guitar variations that Hallvard Wennersberg Hagen adds to the central melodic themes in each song on the album. If this track doesn’t elevate your pulse, I’ll be surprised.

The other song I’ll highlight here is “Forbannet Vaere Jorden Jeg Går På”, which immediately follows “Ars Manifestia” in the running order. Bjotveit puts on a furious show right at the start as the song begins with racing intensity, and then a little bass bridge moves the music into a bounding rhythm and a swirling melody. A longer, bass-led bridge lies ahead, turning the course of the music in yet another glorious direction before returning to a furious, sweeping finale segmented by massive booms of percussive thunder.

For those interested in acquiring the album in digital form, I found it at Amazon. Physical copies can be found there, too, as well as at Discogs and elsewhere.

One Response to “THE REARVIEW MIRROR (KVIST)”