Le Noir Village by the French project Créatures is an unusual and ambitious album in numerous ways. Créatures is the solo project of a man who uses the name Sparda. The album (which is Créatures’ first full-length) tells the story of a twelfth-century countryside village that is attacked by terrifying monsters. As in an opera, all the characters in the story are enacted by different vocalists who act as first-person narrators to help tell the tale. The digipack version of the album will be accompanied by a 16-page booklet that includes, in addition to the cover painting by Simon Hervé, a different drawing in a medieval style for each of the album’s six songs along with the texts of this musical horror play.

But the album’s ambitions go further still. Sparda, who composed the music and also plays one of the vocal roles, performs not only guitars and bass but also piano, organ, ocarina, dung chen, singing bowls, gong, and the sounds of singing choirs. And he was aided in the production of the album not only by the 9 other vocal artists but also by other musicians (including drummer Ehrryk) who perform a further array of instruments that includes cello, violin, trumpet, darbuka, and more.

And if you’re not interested in hearing the music by now, that would be surprising. But what you hear may be even more surprising. We have the premiere of a shortened version of the album’s fourth track, “À l’orée du Mal, le Pacte“. 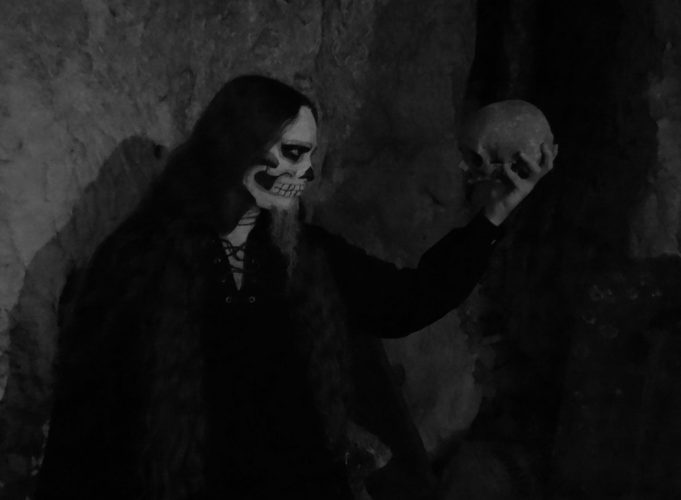 The track you’re about to hear involves a conversation between a character named Alaric (voiced by Sparda’s bandmate Lokaeda from another group called Hanternoz) and a demon (voiced by Haement, who also contributes a solo guitar piece to the song). As for the portion of the song we’re presenting, it begins with acoustic strumming and soon enough moves into a rambunctious, bounding gallop to the sounds of harsh riffs and even harsher lacerated howls forming the words, with the eerie vibrations of a theramin rising through the fray.

And then there’s another change, with the rhythmic patter and thump of hand drums and ghostly melodic tones taking center stage, and then being replaced by a cacophony of layered sounds as the action moves forward. And in the song’s final minutes, things get dramatically more intense and savage before resuming that theramin-laced gallop. Also, there’s a bit of piano at the end.

“Avant garde” seems too tame an expression for this theatrical piece of black horror metal. It’s wild, and wildly inventive — though to appreciate the music fully, this is an album that should be heard as a whole, taking in the full story as it unfolds in sound.

Below we have not only the premiere of “À l’orée du Mal, le Pacte” (shortened version) but also the album’s previously released track “Cadavre Abandonné” and a video trailer for the album as a whole. The album can be pre-ordered here: