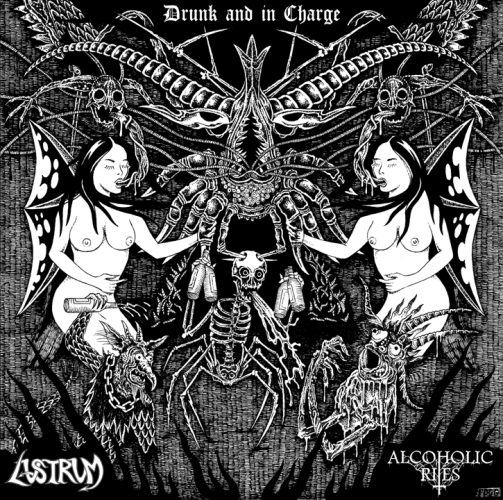 On November 25, Eternal Death Records will release a 7″ split named Drunk and In Charge by two head-wrecking bands of black metal savages, Ecuador’s Alcoholic Rites and Lustrum from New England, and on this Samhain Day we give you a full stream of what they have wrought. Of course, we will first have our say about the music, with a bit of background about the bands.

But first, can we all agree that there’s nothing like being drunk and in charge? In fact, one of the great things about being drunk is feeling in charge, even when you can’t find your ass with both hands (speaking for myself — of course, individual experiences may vary). 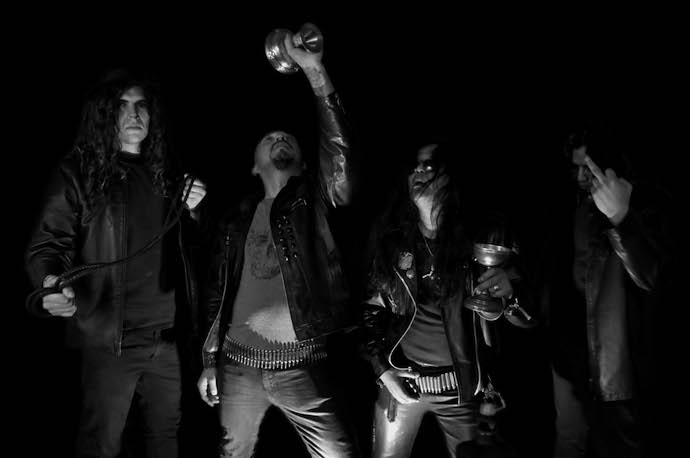 Based in Quito, Ecuador, Alcoholic Rites have been in operation since 2002, with a discography that includes both a debut EP (2008’s Metal Alcoholico-Destructivo) and a debut album (2010’s Alkomanifesto) released by Iron Bonehead, plus a 2010 four-way split and a second album (Fermented in Hell) that was discharged by Nyarlathotep Records three years ago.

On his new split they throw two new songs at our heads, “The Flight of the Black Owl” and “Alkolic Metal Explosion”.

It’s possible you’ll be misled about exactly what’s flying at your head when you listen to the dirge-like, demonic beginning of the first track… but soon enough Alcoholic Rites kick the music into galloping gear. It’s still demonic, still grim, but a much stronger black-thrashing kick in your adrenal glands.

“Alkolic Metal Explosion” starts ripping right from the start with a pulse-pounding drum beat, ugly-as-sin vocal tyranny, and poisonous thrash riffing. The whole thing threatens to come apart at the seams by the end. Drink up!

P.S. Alcoholic Rites are at work on their next full-length, Alcohomancy. Bring it on! 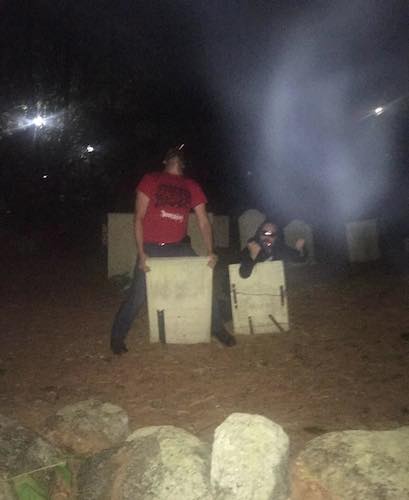 Lustrum‘s first demo appeared in 2011, and this year they’ve re-surfaced with a pair of splits — this one, and a second split being released simultaneously with the Japanese band Abigail.

Lustrum’s two tracks for Drunk and In Charge are “Scum Brigade” and “Burning Sin”.

“Scum Brigade” is a brawling, barraging, electrifying slice of filthy-but-honest rock ‘n’ roll, of the kind you’d expect to find in the best dive bar in Hell. Magnetic riffs are matched against neck-snapping rhythms and serial-killer vocals to deliver a hot dose of booze and testosterone straight to the bloodstream.

“Burning Sin” is a gut-punching, venom-spraying piece of infection, a throw-back to the raw, visceral nastiness of first-wave black metal (with a heady whiff of the blues in the slower-paced leads). It makes a fast and firm connection to the reptile part of the brain. The vocals are convincingly maniacal, and the sinister riffs get your head moving damned fast.

Check out the music below; pre-orders will soon be available here:
Eternal Death Records:
http://www.eternal-death.com/

One Response to “AN NCS PREMIERE: ALCOHOLIC RITES AND LUSTRUM — “DRUNK AND IN CHARGE” (A SPLIT RELEASE)”