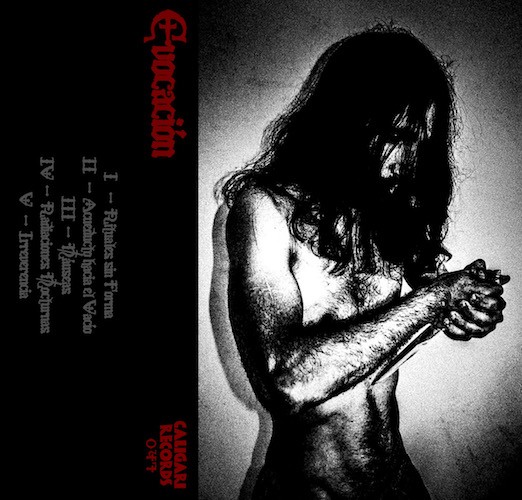 Prepare yourselves for an atmospherically oppressive and unnerving concoction of skull-splintering death-doom and pestilential black metal, because that’s what we’re about to bring you through our premiere of the debut, self-titled demo by a young band from Murcia, Spain, named Evocación. It will be released on tape by Caligari Records on November 11.

In a word, the music is horrifying — the stuff of hallucinations and nightmares, or perhaps smoke-shrouded rituals in which incantations are uttered, blood is spilled, and lives are lost. 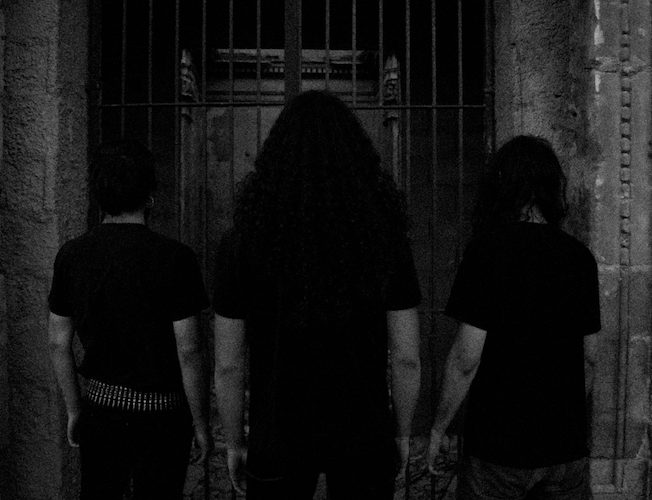 Evocación convincingly create a vision of being pulled down into a quagmire of death and decay by deploying slow, lumbering, pavement-splitting riffs and bass lines dripping with distortion, combined with ritualistic drum rhythms that hammer with bone-cracking force and destructive hostility. Against this utterly dismal backdrop of ponderous demolition, Evocación spew a haze of toxic guitar noise and high, slithering, skin-crawling leads that can boil over into a seething derangement.

There’s certainly no reprieve from this arcane form of murder in the vocal department, as the vocalist delivers a mix of agonizing moans, deep echoing roars, mastiff-like barking, and shrieking spews of goblin bile.

When the band do depart from their normal strategy of slowly choking the life out of the listener while resolutely fragmenting skulls through titanic pounding, they do so in ways that are equally terrifying — through eruptions of chaotic rampaging that are, if anything, even more viciously ruinous.

There’s an unearthly aura surrounding the music, but the band tell us that they recorded the music using analog technology from the ’70s and used a mixing and mastering process that was subtle, and intended to keep the sound “as real as possible”.

The player below organizes the music as it exists on tape, in a continuous stream, so, here’s the track list:

One Response to “AN NCS ALBUM PREMIERE: EVOCACIÓN — “EVOCACIÓN””