Welcome to another Sunday edition of our look back at metal from years past — in this particular case, 25 years in the past.

This is one of those one-and-done little gems that I’ve been drawn to in other episodes of this series, a demo that came out in 1991 by an Illinois band named Maimed, who then disappeared without ever recording anything else. And as far as I can tell, none of the band’s four members went on to record anything with any other metal bands either.  (Correction: guitarist Eric Ondo is a member of the Chicago sludge band Pale Horseman and was also in a Chicago band called Couldron.)

Of course there’s a story to be told about why a band capable of recording something this good — and this far ahead of its time — did nothing further. But as curious as I am, I haven’t found any explanation in my google searches. 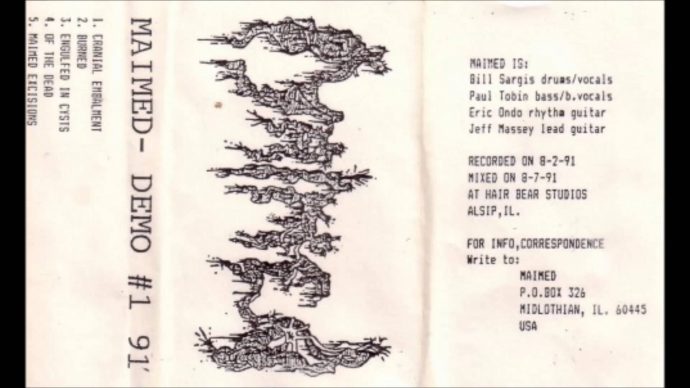 There are people out there in the metal scene who remember this demo, people who listened to the tape decades ago and haven’t forgotten about it. I know that because I discovered it through an online conversation about the demo by two guys who heard it back in the day — one of whom is a label operator and the other of whom is a renowned musician. You’d know their names if I mentioned them.

Anyway, they got me interested in checking out Maimed’s demo. Sure glad I did. It opens with the massive, ghoulish, lurching stomp of “Cranial Embalment”, introducing the listener to the monstrous, reverberating horror of Bill Sargis’ voice as well as Jeff Massey’s soloing skill. “Burned” perpetuates that grisly doom/death pile-driving for a while, but then explodes in a destructive frenzy. “Engulfed in Cysts” also trades places between mid-paced corpse-dragging, demonic ripping and tearing, and full-bore gallops, with tremolo riffing cutting like a bone-saw and Sargis emitting some truly hair-raising shrieks.

“Of the Dead” inflicts some seriously spine-snapping grooves while in juggernaut mode, along with a deeply dismal solo that accents one of the slower, plague-ridden crushfests in the song. And the demo wraps up with “Maimed Excisions”, the first time drummer Bill Sargis (yes, he was the drummer, too) really cuts loose in a burst of maniacal blasting. As before, the band combine slower and faster parts, both suppurating putrescence and a rampant, turbocharged chugfest, adding a creepy bit of darting lead guitar for good measure.

Like other music we’ve featured from decades past in this series, I really do think this demo could be released today and would quickly find a welcoming audience. Maybe it’s because this style of death metal has experienced a resurgence in recent years, or maybe it’s just because this shit is really good.

UPDATE:  After I wrote this post, in an example of sheer serendipitous synchronicity, I learned that Maimed’s demo is going to be reissued next year by Dark Descent Records on CD and vinyl.  Hell! Yes!

16 Responses to “THE REARVIEW MIRROR (MAIMED)”