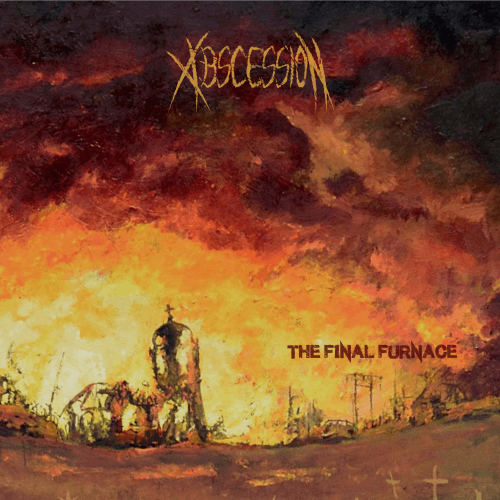 On this 24th day of December, 2016, the thoughts of some people are turning to contemplations of peace on earth and good will to men (and women). Abscession are more intent on reducing the planet to a smoldering cinder. Their objectives are made manifest in the title of their new single, “The Final Furnace“, and even more undeniably in the music itself.

The song, which is being released in digital form today, is the first track from a forthcoming album that bears the working title Rot of Ages, and we present it to you in the form of a lyric video. It comes emblazoned with cover art painted by Mattias Frisk, frontman of Vanhelgd and an artist responsible for artwork on behalf of such other fine bands as Ghost, Miasmal, and Entrapment.

Rot of Ages will be the successor to this Swedish/German band’s lethal first album Grave Offerings (2015) and their debut EP from 2009, Death Incarnate.

Fittingly, the video for “The Final Furnace” displays imagery of hell on earth through the slow-motion incinerating effects of nuclear detonations in paradise. The song is a scorcher, too.

It seethes from the first seconds, ramping up into a rampaging Swedish death metal gallop, with wild vocal ferocity and a penetrating melody that gets its hooks in your head at the same time as the buzzing riffs are coring your skull.

And then Abscession switch things up, seguing into a jolting burst of pile-driving pneumatics — because you might as well bang what’s left of your head before it completely splinters into fragments.

I would have been happy if the jackhammering part of the song had lasted for minutes longer, but the return of that blood-pumping gallop is hardly a disappointment, especially as it’s laced with a skittering, wraithlike solo and provides an opportunity for that sinuous, serpentine melody to burrow even more deeply into the brain.

Enjoy your fucking stay in the final furnace below, and watch this space (or ours) for further news about the upcoming album:

One Response to “AN NCS PREMIERE: ABSCESSION — “THE FINAL FURNACE””