(Andy Synn steps in for this Sunday’s look back at metal releases from the past.)

Christmas Day, for many, is not just a time to spend with family and friends (or whatever fictional deity you prefer)… it’s a time for reflection, a time for looking back and taking stock. So I suppose it’s only fitting that we publish another one of our Rearview Mirror pieces today.

This time around it falls to me to take you all on a journey into the misty depths of days gone by, all the way back to the fabled year of two thousand and ten, to discover the wonders of the first (and, so far, only) album by French philosadists 11 As In Adversaries. 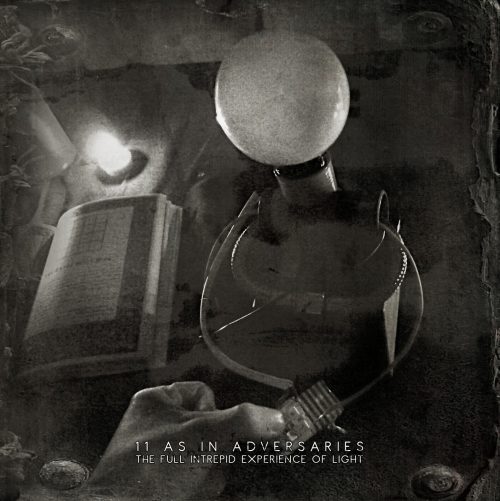 Interestingly enough the material you’re about to hear was originally intended to form the basis of a new Glorior Belli album. However as things began to take shape it became clear that the music was developing into something quite, quite different.

Thus it was that mainman Julien (aka Billy Bayou, who handles everything here bar the drums) elected to separate these six compositions off into their own distinct entity, partially to help preserve the already established character and essence of Glorior Belli, and partially to further free himself from any outside expectations or self-imposed restrictions on his creativity.

As a result the six songs which make up The Full Intrepid Experience of Light can be both naggingly, tip-of-the-tongue familiar (witness the creepily melodic opening grooves of the mammoth, and many-faced title-track, for example), and yet highly unpredictable in nature (see the title-track again), with a far more progressive, even avant-garde, bent to them.

The guitars tend towards the strange, more than the savage, pursuing abstract melody more than morbid menace (though there’s certainly a dose of that still to be found), as do the vocals, which largely eschew the blackened snarl found on albums like Manifesting the Raging Beast and Meet Us At The Southern Sign in favour of an oddly anguished, high-toned croon.

And then there’s the bass, which plays an unexpectedly prominent role here, particularly during the jazz-prog freakout of “Agitation in the Glorious Theme”, where it lays down a slinky, shimmying groove which the song’s twitchy, bluesy guitars then have to try to follow as best they can.

Elements of Black Metal still remain, of course, most notably during the dissonantly atmospheric “Reckless Beacons Attraction” and the climactic “Verses from Which to Whirl” (which is probably the most stereotypically heavy/aggressive track on the album), but it’s definitely a bit of a stretch to try and classify The Full Intrepid Experience of Light as a Black Metal album, and not just because there’s nary a blastbeat or spiked codpiece to be found.

As a matter of fact a number of these songs – particularly the aforementioned “Agitation in the Glorious Theme”, “The Night Scalp Challenger” (which features added darkness from enigmatic edgelord Niklas Kvaforth), and the shamelessly extravagant title-track – remind me more of the Progressive Post-Hardcore of latter-day Thrice (only with added Lucifer) than they do anything from the backwoods of Norway/Sweden/Finland/etc.

Ultimately this is the sort of album that’s destined to have just as many haters as it does admirers. Its experimental mishmash of styles, sounds, and weird, occult ramblings is definitely not going to be to everyone’s tastes.

But to my ears it’s a compelling little oddity, a beguiling little freak of nature, whose flaws only make it that much more interesting and attractive.