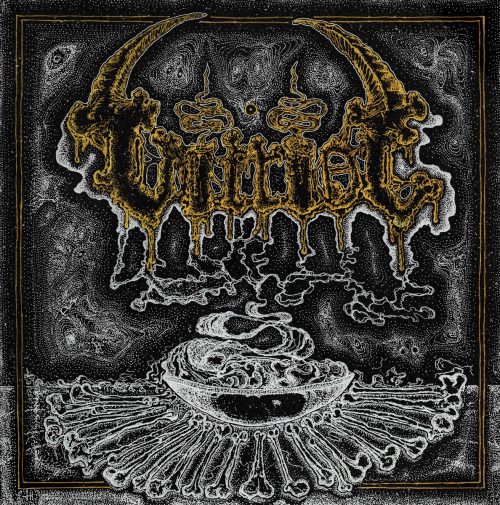 Vitriol have accomplished something remarkable on their first release, in fact so remarkable that it’s going to leave the brains of a certain segment of the listening public spinning around like they’ve been dropped in a blender set to puree. It’s one of the most stunning and stupefying death metal releases I’ve heard in this new year, and I probably won’t hear its equal by year-end. But I must say in the same breath that it may repel all but the most scarred and hardened listeners, the kind of people who (like me) revel in new extremes of noxious but electrifying filth. For those kinds of fans, however, Vitriol have already reach dizzying heights of appalling power.

Vitriol is a two-man operation based in Nuremberg, Germany. They originally released this self-titled debut demo last summer on tape, and now Hellthrasher Productions will expose the music to a wider audience through a CD release on January 27. We’re about to expose you to it with the premiere of a full stream. Prepare yourselves for something completely wild, and uglier than sin. 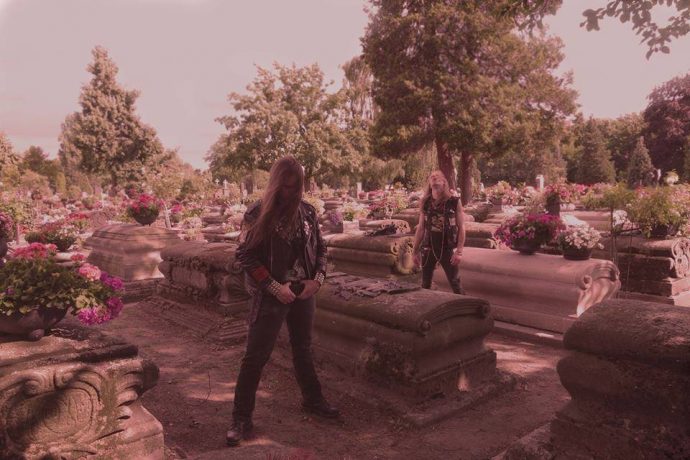 As reference points, Hellthrasher compares Vitriol’s crazed and tortured sounds to the likes of Beherit, Teitanblood, and especially Swallowed (whose Lunarterial album continues to knock me off balance every time I go back to it), and if you can imagine a terrifying space on a Venn diagram where the seething circles of those bands intersect, Vitriol would indeed be in there, while also violently ripping through its boundaries. And if none of those other bands hits any of your sweet spots, this demo probably won’t either.

First impressions of this demo may not be the most accurate ones. Your first impressions will likely be dominated by the deep, massively distorted, and thoroughly corrosive tone of the guitars, the kind of rancid, filthy sound that spawns images of enormous cesspools that have become radioactive enough to melt skin into oozing slurries of skin, blood, and pus. And when combined with the impressive ferocity of the rhythm section, those sounds are used to strike and destroy like a phalanx of demolition machines.

If the hurricane-strength abrasiveness of the sound isn’t enough to send you cowering into a corner, the vocals will finish the job. They’re a repulsive, distorted combination of ghastly howls, tortured roars, vomit-choked proclamations, filthy grunts, and noxious belches. To call the horrifying regurgitations from this throat “foul” would be an understatement.

But what lies beyond these first impressions? Certainly, Vitriol aren’t the only band in the black/death underground who choose to express themselves through such disturbing and chaotic torrents of sonic abuse. But as you move deeper into the demo, it becomes apparent that Vitriol have far greater ambitions (and talents).

What sets this debut apart is the maniacal inventiveness and dynamism on display within these instrumental frenzies. The guitar work is a manifestation of dementia and derangement, more complex and agile than you might think at first blush. In fact, the guitars and the drumming persistently steal the show, not only because they’re blazing fast and technically impressive, but also because of their near-experimental explosiveness. The Vitriol duo are like mad scientists at work, conceiving arcane methodologies that may prolong life immeasurably… while turning their test subjects into unrecognizable monsters.

As mentioned, the music’s dynamism is another quality that sets it apart. There are hard-punching, head-nodding rhythms at work within the opener “Lo-Irt-IV”, but also freakish soloing and a change of pace that increases the feeling of festering disease and decay that emanates from the track. Halfway through the feral ferocity of “Octosphere of Obscure Occurrence” the guitar sound becomes almost clean, ringing like wind chimes in a pleasant breeze. Another clean guitar motif launches “Assimilation (Blood-Feed the Devourer)” and then begins to vibrate just as the radioactive blast front of the full band arrives and converts the song into a huge steamroller (again laced with bizarre soloing).

More perverse fascinations lie ahead. The accurately titled “Massive Retaliation” seethes with insectile guitar swarms freaking out inside a titanic pavement-splitter, and there’s a punk-like romp in the rhythms. The song even includes a dismal, twisted, yet anthemic, arpeggio that rises in the song’s final segment, appearing just long enough to lift your head up before Vitriol return to the task of processing you through a slaughterhouse.

And then there’s “Betelgeuze”, an ambient piece that resembles the soundtrack to an Outer Limits episode that never aired because the risk of creating insanity among viewers was deemed too dangerous. It’s a cacophony of freakish guitar pulses, abrasive distortion, droning and warbling tones, and screeching noises — a small experimental diversion, but one that somehow doesn’t seem out of place.

The final surprise comes in the closer, “The Deathbed of the Usurper”, which is a monolithic crusher — slow, brutal, and as dismal as waking in your bed next to the body of a slasher victim, with a soul-sucking melody at its core. For this final track, the band seem to combine every hideous, repellant element of distortion and effects that they have used previously on the demo, and elevated them to an even higher pedestal of horror.

Listening to this demo, you get the sense of a band who are still exploring and developing what they want to be. But they have already brandished so much skill and ambition in their chosen mode of murderous expression that they will be worth watching closely from this point forward. There’s so much intensity, spontaneity, and chaotic weirdness on display here that I’m eager to see what they do next.

If you like what you hear, check these links for how to acquire the CD:

2 Responses to “AN NCS EP PREMIERE (AND A REVIEW): VITRIOL — “VITRIOL””