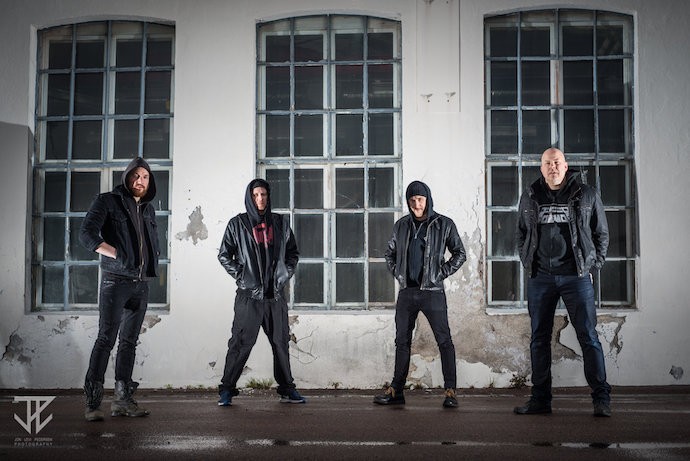 (In this month’s edition of THE SYNN REPORT, Andy Synn reviews the discography of Nidingr, including their new album slated for release on February 10.)

Recommended for fans of: Mayhem, Pantheon I, Dødheimsgard

Somehow, despite all the love we’ve shown for this band, despite all the drunken ramblings we’ve had about their awesomeness, and despite stating numerous times that Greatest of Deceivers is one of the best Black Metal albums of the last ten to fifteen years (at least), it appears that the amount of actual coverage we’ve given to Nidingr has been woefully lacking.

Thankfully, the impending release of the group’s fourth album, The High Heat Licks Against Heaven, is all the justification I need to wax lyrical about the band, making them the perfect choice for this edition of The Synn Report.

Masterminded by wandering guitarist Teloch (who cut his teeth playing with some of the Black Metal scene’s biggest names, including both Gorgoroth and 1349, and who has since gone on to serve as chief guitarist/songwriter for both NCS favourites The Konsortium and the legendary Mayhem), Nidingr originally came into being around 1996, but didn’t release their debut until 2005.

Since then they’ve cycled through numerous members (including both Tjalve and Seidemann of Pantheon I, percussive mercenary Tony Laureano, and the infamous Hellhammer himself), with Teloch and glass-chewing vocalist Cpt. Estrella Grasa serving as the band’s key linchpins, while releasing two, soon to be three, further albums of hyper-aggressive, sadistically melodic, Death- and Thrash- tinged Black Metal. 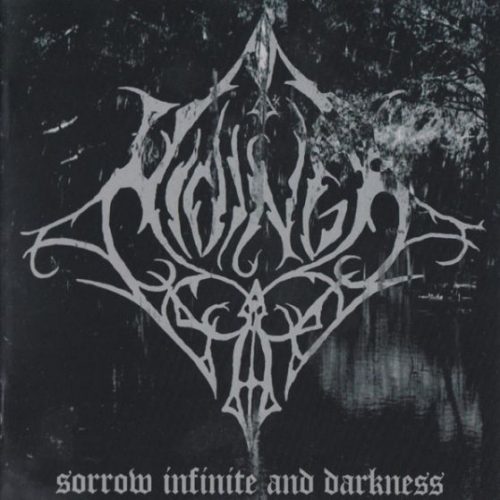 The band’s first album was their most “traditional” affair. Opener “Child of Silence”, for example, sticks pretty closely to the standard Black Metal template of threshing, acidic chords over blasting drums and subdued keys for a good part of its run-time, with the gruff vocals and occasionally more angular riff work giving sections of the track a feel not dissimilar to mid-period Behemoth (something which is also true of tracks like “The Watch-Towers of the Universe” and “Righteousness in Beauty”).

Even here, though, there were already signs of the band starting to diverge from the Black Metal model a bit, as a number of Teloch’s riffs and melodies possess an acute and fleet-fingered sharpness which serves to make them stand out from the crowd.

The tracks which follow continue in a similar vein almost to a one, though that’s not intended as a criticism. Though more “traditionally” Black Metal in tone than the albums which would follow, there’s never any doubt that Teloch and his merry men are already well on their way to developing a distinctive take on the Black Metal template, one which is just a little bit different to their peers.

Whether it’s the melancholy melodic outro to the Black/Thrash assault of the title-track, the catastrophic intensity of “Death and Glory”, or the coiling grooves and serpentine tremolo melodies of “Come Away”, there’s always something in each track, some hook, some twist, some added dose of anger and adrenaline, to mark them out as something a cut above the rest.

Even the more stereotypical tracks – such as the blasting Black/Death hybrid of “MAKHASHANAH” and the proto-Dimmu delights of “Mystery of Toil” – still come with a hefty helping of fire and brimstone antagonism, meaning they’re still more than capable of melting faces, even if they don’t really break the mould.

The album ultimately concludes with the two-pronged assault of “Rejoice” and “Upon This Unprofitable Throne”, both of which deliver a searing electric shock to the system in unapologetically ruthless fashion, with not a moment wasted or left wanting between them. 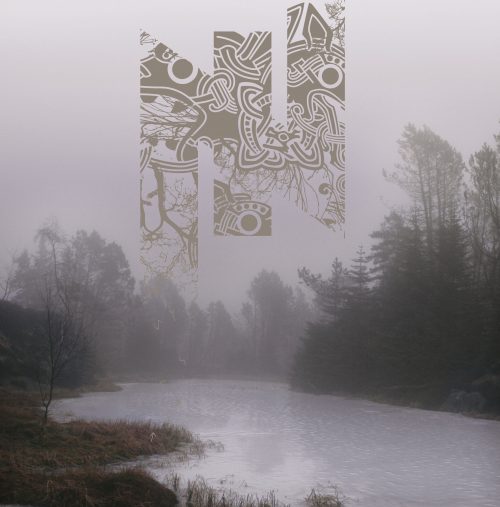 Despite its short length (at just under twenty-three minutes, it’s really more of an EP than an album) Wolf-Father is, without a doubt, the moment where the band truly started to come into their own. Their sound had become more defined (and refined) while still retaining its raw, bloodthirsty energy, and the gritty, gravel-gargling vocals of Cpt. Estrella Grasa had finally found their unique niche, developing into something quite different from the cadaverous shriek most usually associated with the genre.

“Fafnismol” starts things off with a mix of driving, storm-lashed riffage and wandering bass-lines, before Hellhammer kicks thing up a notch with some seriously intense blastery and rapid-fire footwork, all while Grasa howls a litany of lyrical anguish (derived from the traditional Norse poetic Edda) atop a molten cascade of writhing tremolo riffs and scornful grooves.

Follow-up “Baldrs Draumar” bursts out of the gate in absolutely frantic fashion, all frenzied guitars and flailing blastbeats, but, over time, also reveals itself to be in possession of vile plethora of mortifying, string-scraping harmonic hooks and grim, gloomy melodies, including a melancholy turn by Ulver’s Kristoffer Rygg during the song’s mournful final moments.

The venomous snarl of Cpt. Estrella Grasa introduces the blazing, dissonant disaster that is “Reginsmol”, which frequently blurs the lines between Black and Death Metal – particularly with some of its live-wire, low-string riff attack — without falling prey to the usual torrid clichés, while “Voluspo” again begins with a hail of murderous blastbeats and scything, daisy-cutter riffs… but somehow this approach still hasn’t gotten old, mainly because the band are smart enough to keep tweaking the delivery every time to keep it feeling fresher than a day-old corpse (and twice as potent).

The creepy, crawly melodies which crop up in the bridge are a particularly nice touch, matching the song’s unexpectedly dark and doomy guitars to some nicely understated, undulating bass work… after which the short, sweet, and sublimely savage strains of “Hymiskvitha” go straight for the throat without mercy or remorse, eventually leading to a titanic climax of heaving, thrumming riffs and ominous, claustrophobic atmosphere.

The album/EP concludes with “Lokasenna”, which unleashes absolute hell on the listener’s eardrums in the form of a torrential rain of bludgeoning blastbeats, manic guitar work, and snarling, skin-stripping vocals, before finally culminating in a punishing display of pounding, predatory groove. 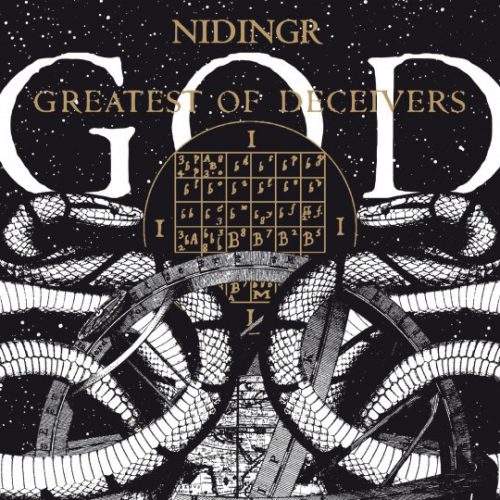 In case you didn’t work it out from my introductory preamble, Greatest of Deceivers is one of my all-time favourite Black Metal albums. And one of my all-time favourite albums full-stop. Every single song just hits so damn hard, and cuts so damn deep, and every single track is just bristling with so many nasty, in-your-face hooks, that it’s practically criminal this album isn’t more widely celebrated.

Case in point, the opening title track is a veritable blitzkrieg of explosive blastbeats and scything riffs, which slash and chug and batter away at your senses, whose assault is very occasionally broken up by moments of morbid melody, underpinned by some surprisingly nuanced and intricate bass work, all capped off with the harrowing, hook-laden howl of Cpt. Estrella Grasa.

Just try to resist screaming along to “I am the greatest of deceivers, of whom it is written”. You’ll fail.

The title-track’s unexpectedly atmospheric and multi-layered finale allows the band to showcase another of the many facets of their musical identity, before slipping seamlessly into the lurching, angular riffs of “All Crowns Fall” (complete with a frankly humongous chorus hook), which is followed in turn by the bone-grinding grooves of “O Thou Empty God”, with Grasa taking on the role of some sort of twisted preacher, spitting out his blasphemous invective over a martial procession of charred, chugging riffs and moodily melodic bass lines.

The short, sharp shock of “The Balances” ups the ante in terms of sheer savagery and extremity, with new drummer Øyvind Myrvoll unleashing an absolutely frantic barrage of blistering blasts, while “Vim Patior” finds Nidingr pushing things in a surprisingly proggy direction, the song’s labyrinthine structure allowing for multiple shifts in mood and direction, from furious blastery, to neck-snapping thrashery, to brooding ambience, after which the ravenous guitars and rampaging grooves of “Rags Upon A Beggar” prove to be hookier than a red light district at sundown, and just as infectious.

The ever-enigmatic Kristoffer Rygg returns to the fold to add a dose of dark glamour to the second half of “The Worm Is Crowned”, a monstrously groovesome and hook-infested piece of prime metallic menace if ever I’ve heard one, which is followed in quick succession by “Pure Pale Gold” – a punchy head-banger of a track, overflowing with riotous riffs and sharpened, straight-razor melodies – and the hideously hooky “Mother of Abominations” – whose every bone-grinding guitar riff and buzz-saw tremolo run has evolved for the sole purpose of boring its way through your skull and into your brain.

The whole shebang ends with the scratching, scraping riffs and lithe, slithering bass-lines of “Dweller in the Abyss”, which matches sudden spasms of blistering, blackened bile and roiling streams of chugging, churning guitars to an ever-present undercurrent of malevolent melody, bringing the album to a suitably intense, and utterly unforgiving, conclusion.

THE HIGH HEAT LICKS AGAINST HEAVEN – 2017

The band’s fourth album finds the group (now a quartet) attempting to experiment a little, while also retaining, and further refining, the sound which they defined so perfectly on Greatest of Deceivers.

Both “Hangaguð” and “Surtr” cleave pretty closely to the sound established on GOD, delivering a veritable avalanche of high-energy, high-impact, bleakly melodic Black Metal riffs, neck-snapping grooves, and furious, fire-breathing vocals, although the latter also finds the band adding a touch more Death Metal flavour to the proceedings as well, making it one of the heaviest tracks they’ve committed to tape thus far.

With “The Ballad of Hamther” Nidingr once again get a chance to show off their artsier, more avant-garde impulses, the song’s scalding riffs, disturbing melodies, and nimble, spidery bass lines, twisting and contorting in strange and unpredictable ways, while relentlessly building towards a surprisingly solemn and sombre finale, before the advent of “On Dead Body Shore” introduces you to a song which is not only one of the best on the album, but one of the band’s best songs period, every vicious, saw-toothed riff, rabid, snarling vocal, and keenly sharpened hook positively dripping with pure, primal rage.

By way of contrast, the atmosphere-heavy “Gleipnir” finds the band navigating a razor-thin line between chilling, ambient Doom and darkly hypnotic Trip-Hop with impressively eerie results, after which the heaving, Death Metal inflected strains of “Sol Taker” hit you with all the force of a runaway truck.

On “Ash Yggdrasil” we find the group once again stepping a little outside the box, opting for an altogether slower, doomier approach dripping with spine-tingling atmosphere, aided and abetted by the now-traditional appearance of Kristoffer Rygg and his seductive, devilish croon. This is followed in quick succession by the utterly crushing “Heimdalagaldr” which, as well as being easily the heaviest track the band have ever recorded, also happens to include an unexpected interlude of insidious, sinister ambience.

With its serrated, choppy riffs and caustic vocals hooks, “Valkyries Assemble” is another instant classic that would fit in seamlessly alongside the very best tracks from Greatest of Deceivers, helping to cleanse and refresh the palette before the album’s epic finale, “Naglfar is Loosed” is, erm, loosed upon the listener.

Grim and grandiose in all the best ways, its massive, ominous riffs and hoarse, bellowing vocals provide a perfect contrast to the angelic guest vocals of Amalie Bruun (Myrkur), whose appearance adds a sense of sublime, desolate beauty to this, the album’s climactic, apocalyptic anthem.