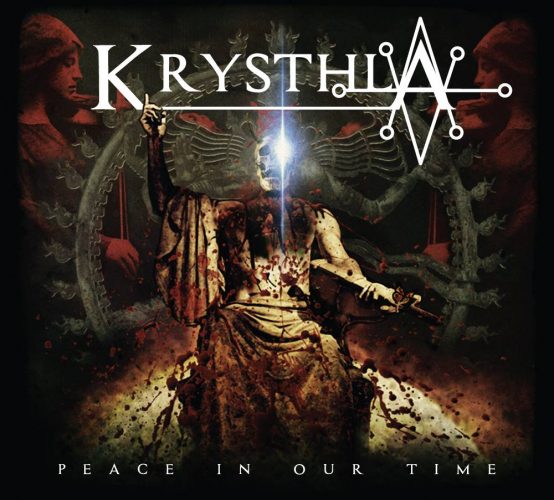 (Andy Synn reviews the new album by Krysthla from the UK.)

So let’s address the big Polish elephant in the room straight away, shall we?

If, after listening to Peace In Our Time, the second album from British bruisers Krysthla, I were to tell you that these guys really like Decapitated, have been on tour with Vogg and co., and probably own several Decapitated shirts between them, I doubt you’d be surprised, as the presence of the Polish groovemongers looms large over pretty much every track on this album.

It would be wrong to write the band off as simple copycats, however, as, although their major influences (primarily, though not exclusively, latter-day Decapitated and late-2000s period Meshuggah) are certainly very prominent, the songs which make up Peace In Our Time are delivered with a level of energy and belligerent intensity which makes them impossible to dismiss. That energy, that intensity, that power and drive, is readily apparent in both opener “The Minor Mystery of Death” and its scorching follow-up, “Yawm al-Qiyamah”.

The surprisingly melodic, Meshuggah-inspired intro to the former is somewhat reminiscent of dearly-departed Danish metallers Mnemic, although the song’s punchy, thrash-infused main riff(s) and chunky, staccato rhythms are pure Decapitated worship through and through, as is a fair bit of the more Death Metal leaning “Yawm al-Qiyamah”.

But, although these comparisons are as unavoidable as they are undeniable, they don’t tell the whole story.

For one thing they ignore the potent contributions of vocalist Adi Mayes, whose hoarse, hostile bellow is one of the band’s greatest assets, spitting fire and venom with caustic clarity in a way which really does add a wealth of character and palpable fury to each track.

And, for another, they also fail to acknowledge that originality, while often a laudable aim in and of itself, isn’t the be-all-and-end-all of music.

Everyone takes influence from other bands. Everyone borrows ingredients from everyone else. But not everyone is able to deliver the goods.

Execution matters. And the execution here is absolutely impeccable.

It helps of course that by the time you hit “Depths”, the band have clearly found their groove (no pun intended). For although they’re still playing with the same integral sounds, this song – all heaving, low-slung riffs, pneumatic, piston-powered drums, and a dash of ever-so-slightly proggy, old-school melody – really finds the five-piece starting to step outside the shadow of their influences.

But even when that shadow still hangs heavy over the band’s collective head, as it does on “Make Disciples of the Nations” and “Within the Lie of All Lies” (which could, with a bit of judicious reworking, fit in comfortably on Carnival Is Forever and Koloss respectively), the sheer aggression which they bring to bear, and the utter vehemence of their delivery – not to mention their impressive grasp of neck-snapping, whiplash-inducing hooks – helps the band carry the day.

Speaking of hooks, Krysthla definitely aren’t afraid of them at all, and aren’t averse to a big, in-your-face chorus either, as the pounding refrains of “Make Disciples…” and “In Death We Shall Not Die” so aptly demonstrate, both tracks also making use of some perfectly proportioned injections of gang vocals to really hammer home their point.

Following the churning, Gojira-esque chugathon of “Age of War”, the album concludes with what I for one think is its most interesting, and quite possibly best, track, the titanic “Eternal Oceans” which, in contrast to the material that precedes it, goes for a much slower, much more measured pace, heavy on atmosphere, heavy on emotion, and just plain heavy in general!

It really shows a different, and more distinctive side to the band and, although it wouldn’t quite have the same impact without the context of the seven tracks which come before it, it’s definitely something I hope they expand upon in the future.

Now no matter who actually coined this phrase, what it means is that even good artists borrow the ideas of others, and there’s no shame in that.

But the truly great artists, the ones who can reach a little higher and see a little further, are the ones who take the ideas of others and make them their own.

And while Krysthla aren’t quite there yet, as the ideas and influences they’ve taken still feel a little bit borrowed at times, they’re definitely right on the cusp of greatness.

They just need to cross that last threshold, break down that final barrier, and find a way to make the pulverising sound they’ve already developed into something they can truly call their own.

Peace In Our Time will be released on April 7, 2017, via PHD. It’s available for pre-order from Amazon UK here.