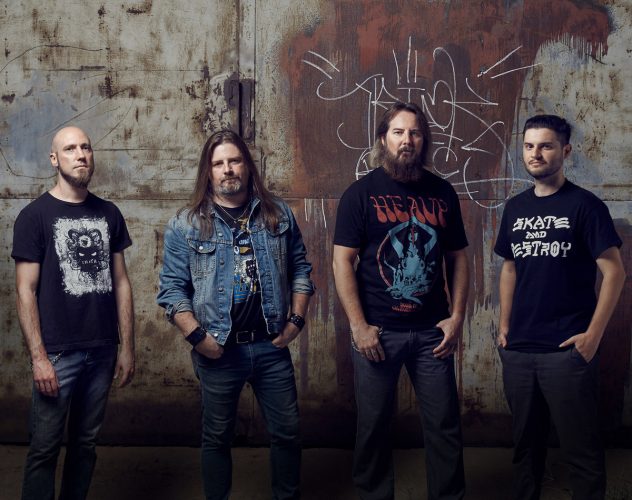 Here are the final three albums from 2016 which I have handpicked for your listening pleasure.

I hope you enjoy them, and I sincerely hope you’ve all discovered a gem or two over the last few weeks of these “catch-up” posts.

I’ll probably be following up on a few of my personal favourites over the next month or so, so we’re not quite done with 2016 just yet, but, for the most part, I’m now going to be switching my focus to albums and EPs from 2017, as I’ve built up quite a backlog over the last several weeks.

In the meantime, however, why not get stuck into the cavalcade of humongous riffs, ear-catching melodies, and badass grooves provided by this triumphant triptych of bands? 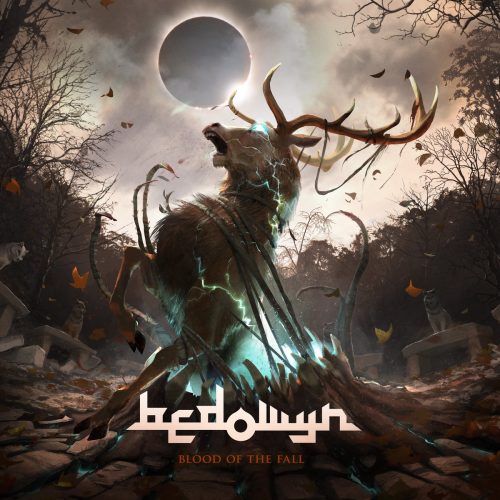 BEDOWYN – BLOOD OF THE FALL

We’ve actually failed to cover Blood of the Fall twice now, first when it was released digitally in October of 2015, and then again when it received a full-blooded physical release in May of last year. Shame on us. Double-shame, in fact.

But better late than never, right?

Inhabiting that nebulous nether-realm between swaggering Stoner Metal and classic Doom, Bedowyn deal in a sumptuous blend of big, meaty riffs, epic, prog-tinged melodies, and shamelessly grandiose hooks, reminiscent of both High on Fire (at their proggiest) and Mastodon (at their most melodic), all topped off with the burly, semi-melodic bellow of vocalist/guitarist Alex Traboulsi.

The band lay all their cards on the table with the doomy, prog-tinged grooves of “Rite to Kill”, all keenly-honed riffs and nimble, fret-dancing melodies courtesy of Traboulsi and his fellow axeman Mark Peters (who handles the majority of the leads on this album), aided and abetted by some superbly smooth bass work from Todd Parham and an impressive display of intricate drumming from sticksman Marc Campbell.

The melodic tapestry of the title-track (complete with some subtle keyboard embellishments) is another real winner, dabbling with a mix of harsher, snarling vocals and solemn cleans reminiscent of the much-missed David Gold, to augment Traboulsi’s traditionally more rough-hewn delivery, while the proggy punch of “Cotard’s Blade” makes for an instant attention-grabber with its wealth of catchy hooks and surprisingly heavy moments.

“Leave the Living… for Dead” slows things down a little, but doesn’t skimp on beefy riffage in the process, while also allowing the moody interplay between bass, guitar, and drums, to really shine through, as does the much darker, doomier affair that is “Where Wings Will Burn”, after which the groovy gallop of “I Am The Flood” finds the quartet channeling a fair bit of early Baroness.

And while the album certainly has its weak points (the instrumental track, “For A Fleeting Moment”, for example, doesn’t really add much to the proceedings), there honestly aren’t any fatal flaws to be found on Blood of the Fall – though I definitely feel like the melancholy “Halfhand”, which comes across like a gnarlier, more toothsome version of Woods of Ypres, really should have been the album closer, as neither the somewhat over-long “Lord of the Suffering” or the instrumental outro of “The Horde (Exodus)” have quite the same impact overall.

Still, these are minor issues in the grand scheme, and this is still an album which rightly deserves to find a home in anyone’s collection. 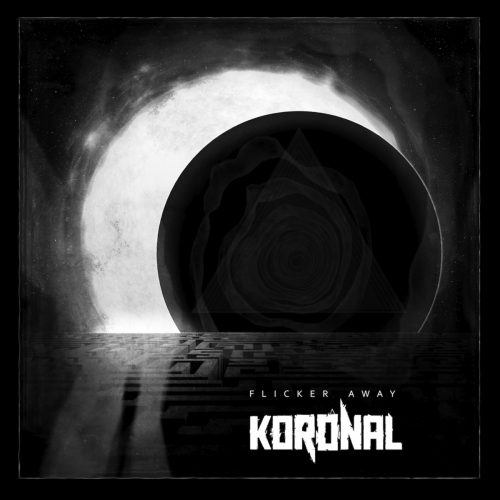 Controversial (or not) as it may be, I’d say that around 90% of the bands who cite Meshuggah as their primary inspiration fall into one of two categories.

Either they’re content to simply copy the superlative Swedes wholesale, with none of the same character or creative flair, or else succumb to the temptation to sanitise their sound, smoothing off all the harsh angles and sharp edges in a desperate attempt to appeal to a wider audience.

But thankfully Koronal belong to that rare 10% who walk a different path, and although the band’s colossal, concussive guitars and sinister pseudo-melodies mark them immediately as a child of Meshuggah, the Polish quintet have already taken major steps towards forging their own identity on Flicker Away, without watering down or diluting any of the heaviness or intensity.

Tracks like phenomenal opener “Scarred Protector” and the swirling “Fabric of Reality”, for example, put a focus more on texture than technicality, exchanging eye-catching complexity for a heavy helping of pure sonic density, along with an overarching sense of atmosphere which recalls the Progressive/Post Death Metal of Gorguts, Nero di Marte, and their ilk.

And even when the band do pull more strongly from the Meshuggah side of things – see the elasticated riffs and eerie, Thordendal-esque leads of “Awaken” – they do so with such brazen, ballsy confidence that the resultant concoction of churning, blunt-force guitar work and intense, atonal ambience is somehow still light years ahead of the competition

In the end, however, it’s the little things which Koronal do differently, the subtle twists and slight esoteric touches, which help them stand out as more than mere imitators.

So while drummer Mateusz Sawicki is certainly no slouch behind the kit, his choice not to simply copy the style of Tomas Haake (as so many others have tried, and failed, to do) but to focus on finding his own particular groove (pun intended) gives each track a very different percussive “voice”, while the monstrous roar of vocalist Łukasz Plasma acts as an ever-present reminder of the band’s more Death Metal leanings, helping to subtly differentiate songs like the neck-snapping “Descendants” and the undeniably Koloss-esque “Usurper” from their Swedish progenitors.

In fact, when all is said and done, I think I actually prefer this album to The Violent Sleep of Reason. It’s nowhere near as technical of course, and some might say it doesn’t have that same, instantaneous “wow” factor, but, overall, I’m finding it to be a lot more memorable and a lot more of a compelling listen.

And whereas I find myself skipping over tracks here and there on …Reason, I seem to have no such problems when it comes to Flicker Away. 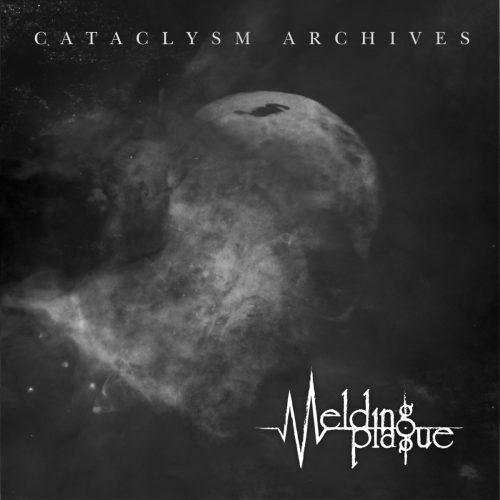 You can thank the good folks over at Invisible Oranges for bringing this band to my attention, a three-piece Black Metal/Industrial hybrid from Finland who take their name from Alastair Reynolds’ expansive Revelation Space saga, and who name-check such luminaries as Immortal, Arcturus, Skinny Puppy, and Ministry as their primary influences.

Across the eight towering tracks which make up Cataclysm Archives, Melding Plague display an enviable talent for mixing (and melding) molten metallic riff work and prominent, pulsating bass lines with a series of shimmering, cybernetic synthscapes, and harsh, hook-filled vocals (just try to resist the cruelly catchy “Shape the flesh / Forge the bones” refrain in “Amelioration”, I dare you), beginning with the savage “Initiation”.

This track immediately shows off the band’s Immortal influence with reckless abandon, although it is also somewhat reminiscent, in places, of Rebel Extravaganza-era Satyricon, combining the intense, imposing riffage of the former, with the gritty, hypnotic vibe of the latter, while both the ominous “Desert Ritual” and the coldly compelling “Vermicide” keep things just as grim and ghastly as the opener, the former by delving into some deep, darkly oppressive grooves and the latter by letting rip with some truly razor-sharp riff work and virulently infectious vocal hooks.

The creepy, claustrophobic vibes of “Malicious Indoctrination” find the band adopting a more measured, atmospheric approach, the song’s melancholy, melodic guitar lines augmented by some suitably eerie synthwork, subtle injections of sombre clean vocals, and a thick and meaty bass presence, after which the vicious “Submission of the Wretched” and the hook-laden monstrosity of “Rage of the Innocent” – a veritable hurricane of stabbing, strafing riffs and thrumming, live-wire bass lines – raise the intensity and aggression to radioactive levels once again.

Climaxing in style with the brooding “Depository of Replicated Minds” and the epic, eight-minute monolith of “Amelioration” – part snare-heavy stomper, part scalding riff-fest, and part hauntingly melodic, synth-infused atmospheric crawl – Cataclysm Archives ultimately proves itself to be a more than worthy successor to the destructive cyber-metal attack of the legendary Thorns, as well as yet another absolutely fantastic gem of an album which, inexplicably, flew under most people’s radars last year.

So I implore you to head on over to the band’s bandcamp page as soon as you can, purchase the album, and then tell all your friends how much you love it. More people need to hear it.