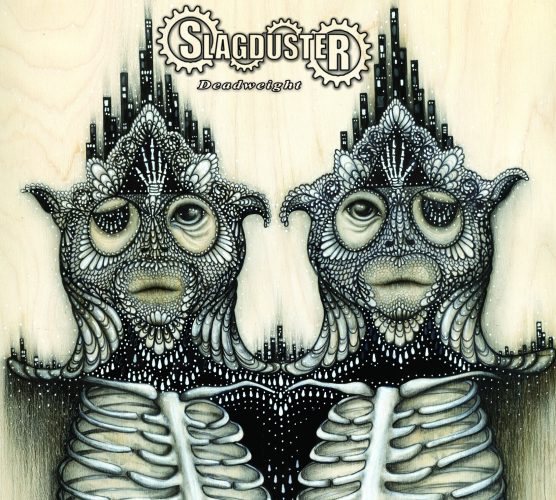 I had forgotten about Slagduster. More than six years of absence will do that, even for a band whose debut album back in 2010 was as astonishingly good as Slagduster’s Nature. Humanity. Machine. But Slagduster have come roaring back, and have lost none of the instrumental flair and song-writing panache that made that debut so impressive — they’ve just gotten even better. Their new album is named Deadweight, and today we’re revealing one of the new songs, “Mother’s Milk“, in advance of its release on May 5th.

Slagduster like to say that they are “from the boonies of Grand Forks, BC where there’s nothing to do but play metal!” According to The Font of All Human Knowledge, Grand Forks has a population of 4,049 situated at at the confluence of the Kettle River and the Granby River, where piles of slag still remain from a copper mine that closed in 1935. And now you have an insight into the band’s name. 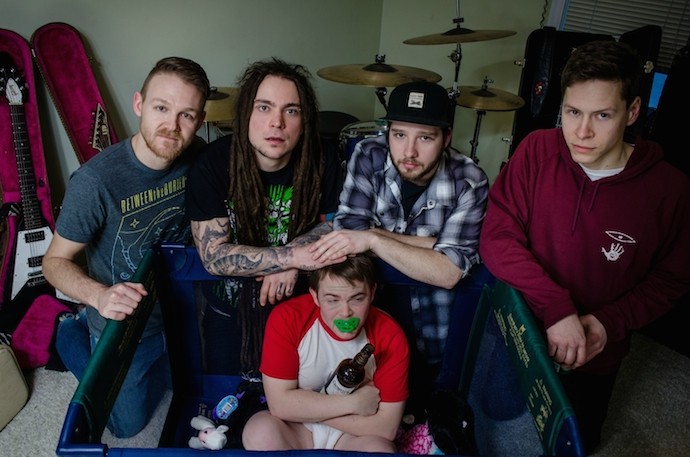 Grand Forks may be out on its own, hundreds of miles from larger communities, but it seems to be an effective incubator for head-spinning metal, as you’re about to find out. And it’s also clear that the years of work that Slagduster have devoted to creating, revamping, and honing these songs into their current shape have paid off.

“Mother’s Milk” really is a head-spinner — a lurching, twisted, off-kilter, and thoroughly riveting display of vocal viciousness and instrumental pyrotechnics. With tempos that veer like a drunk on a bender and kaleidoscopic fretwork that refuses to be pinned down for more than seconds at a time, the song could be mistaken for a musical manifestation of dementia and delirium but for the band’s persistent circling back to compulsive grooves.

Like the guitarists, Slagduster‘s rhythm section is technically impressive and impressively inventive, but they keep the listener locked in. Just when you think the song is going to spin out of control (or out into orbit), the band yank you back to earth, back on course. And it’s only after the song stops that you realize how tightly all these machinations have been integrated, and how well it succeeds in infiltrating your head and getting stuck there despite all the unexpected twists and turns. Deadweight may be the name of the album, but this song is anything but (though it’s plenty heavy, as well as progressive).

When asked to comment about the song, the band told us this:

“‘Mother’s Milk‘ is one of the more structured arrangements on the new album. We like some of the riffs so much that we couldn’t avoid bringing them back a couple times. It starts off with a strong driving march feel, before picking up speed and racing around hairpin corners, drifting effortlessly while navigating multiple sonic terrains smoothly from start to finish. Lyrically, the message focuses on a downward spiral of dependence and desperation, characterized within a story about an unhealthy mother/son relationship, a dark contrast to the song’s upbeat tempo.”

Deadweight features eye-catching cover art by Mia Dungeon. The album will be released by the band’s independent label Waterlow Audio Records. Below you can check out not only “Mother’s Milk” but also “Peeping Ron”, which premiered previously at The Sludgelord. To pre-order on Bandcamp, go here: