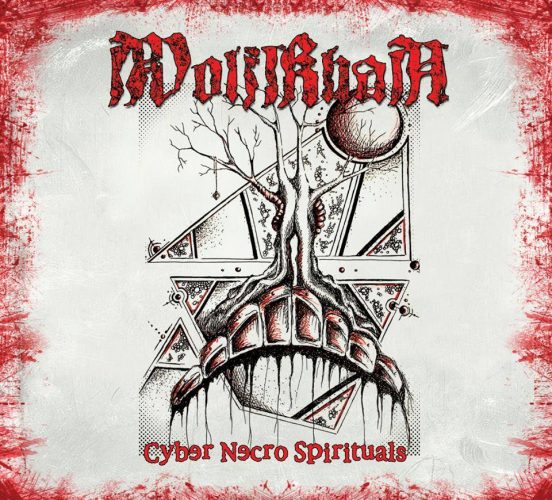 Even the most serious of musicians, across all genres of music, have been known to take whimsical digressions from their main lines of pursuit. Sometimes the results sound like a joke, and sometimes the result is less whimsical, more accomplished, and more fun than we might expect at first blush. Which brings us to the very strange but very addictive first full album by Wolfkhan, Cyber Necro Spirituals.

Wolfkhan is the side-project of Marcin Gąsiorowski, who is the male vocalist and one of the guitarists for the folk/metal band Thy Worshiper (whose most recent album, Klechdy, came out last year). Cyber Necro Spirituals will be released on April 25th by Arachnophobia Records. 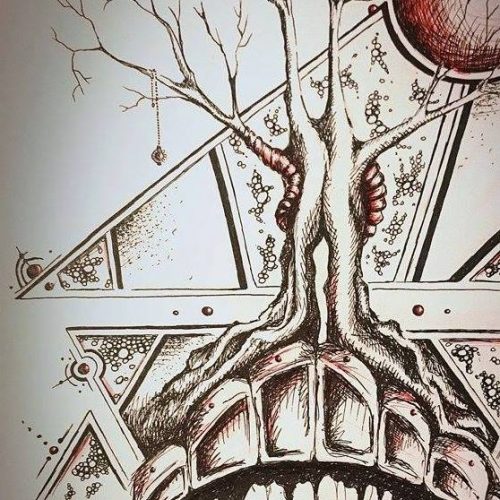 Press materials for the album variously describe it as “nine bizarre stories stemming from mental trash and dark corners of odd fantasy”, as “an audial acid trip”, as “absurd and black humour meet post-apocalyptic, industrial notes”. It may have been influenced by Gąsiorowski‘s reading of the Black Oceans novel by Jacek Dukaj. It includes song titles such as “Pozeracz serc” (“Hearts’ Devourer”), “Glosy spod chodnika” (“Voices from Beneath the Pavement”), and “Ballada o twardym chuju” (“Ballad of a Hard Dick”).

And so it may seem whimsical, something that Gąsiorowski needed to get out of his system. But it’s a carefully crafted diversion, with unexpected ingredients combined in unusual ways. The layering of those textures — along with some highly compulsive rhythms — is a key source of its attraction.

Most of the music seems to be the result of synthesizers and keyboards, with periodic displays of metal guitar thanks to Thy Worshiper guitarist Dariusz Kubala, and an array of contrasting vocals, which include not only Gąsiorowski‘s distorted snarls, shrieks, and growls, but also contributions from Thy Worshiper’s past and present female vocalists, who sometimes sound like pop idols, sometimes like operatic sopranos, and sometimes like angelic spirits.

The results vary across the album’s nine tracks. The opener “Kurwa”, for example, is hallucinatory, with eerie synth movements consisting of weird ambient waves and other warblings and flickerings of electronic sound meshed with driving industrial beats, abrasive snarled cries, and wailing female voices.

The follow-on track “Oczy”, on the other hand, is a seductive mix of the primitive, the primal, and the futuristic. The driving rhythms are the key to the song, combining tribal-style hand-drumming, lilting electronic pulses, warm keyboard notes, and a voice that sounds like fingernails scraping a chalkboard. You can’t help but move to the song — which is true of all the songs.

Sometimes the songs sound like the inspired creations of a DJ at a dance club in Hell (“Ognisko”, “Zzera”, and Niewidzialni”, for example). At another time, the primal Afro-Caribbean rhythms of “Oczy” return, but mixed with eerie electronic melody, wailing chants, and demonic harshness (“Wmawianie”). And there are textures of Slavic melody in such songs as “Pozeracz Serc” and “Ballada O Twardym Chuju”, which integrates what sounds like Slavic folk melody from the female vocalists with layers of electronics, compulsive snare rhythms, abrasive spoken-word patter, and a bit of cosmic drift.

Depending on where you are on the album (and sometimes simultaneously), the album is sensual and sexy, cold and machine-like, hypnotic and hellish, shamanistic and dreamlike. And there’s hardly a minute when you don’t feel like moving your head, your feet, your whole body.

Maybe it’s wrong to think of the album as whimsical, maybe better to think of it as fiendishly clever. It’s certainly a hell of a lot of fun to hear, as different as it is from what we usually feature at our site (and what usually comes from Arachnophobia). Hope you like it, too. The premiere of the full stream is below.

One Response to “AN NCS ALBUM PREMIERE (AND A REVIEW): WOLFKHAN — “CYBER NECRO SPIRITUALS””