Like many of you I have been waiting for this album with a sense of near-breathless anticipation ever since it was first announced in 2014 that God Dethroned were getting back together.

And even though nothing had been announced about new material, I always knew that it was only a matter of time before the band would eventually get round to completing the WWI-themed trilogy of albums which began with 2009’s Passiondale.

So now here we are, seven long years since the group’s last release, all set to receive the third and final part of that trilogy, The World Ablaze, and the big question is — has the passage of time blunted their edge, or has it simply allowed the band to martial their forces for one final assault? 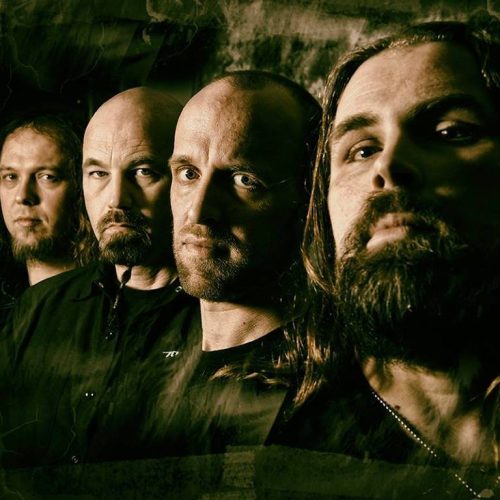 One thing which has endeared me to the band’s interpretation of the tragedy and turmoil of the First World War is how they’ve refrained from glorifying it along the way. There’s been no attempt to whitewash the ugly, futilie nature of the conflict. No attempt to portray it as “noble” or “righteous”. And the focus has almost always been on the human cost of the war, on every front, rather than on some mythical celebration of national pride or military prowess.

And while there’s always been an undeniable power and majesty to the music, it’s nevertheless tinged with a deeply rooted sense of melancholy and sorrow, in tribute to the many lives lost in the so-called “the war to end all wars”.

Speaking of the music, the band are on top form here, still straddling the nebulous border between the more “extreme” end of Melodic Death Metal, and the more song-based side of “true” Death Metal”, but with a renewed focus and confidence – the hooks are still sharp and spiteful, the riffs are still intense and electrifying, while the drums, although still supremely ferocious when they need to be (which is often) aren’t quite as frantic as they were on Under the Sign of the Iron Cross, with Sattler and co. taking a more measured and dynamic approach to their writing this time around.

Melody, of course, remains a key part of the band’s arsenal, as it has for a long time, going all the way back to albums like Ravenous and Into the Lungs of Hell (or perhaps even earlier). In fact I’ve even seen certain people compare the band’s current sound to that of Arch Enemy… which wouldn’t be an entirely invalid comparison, truth be told.

But while the two bands do share a few sonic elements in common, as well as a more concise and hookier approach to songwriting than a lot of their more “brutal” peers, God Dethroned’s sound has always been much heavier, much more aggressive, and much less overtly crowd-pleasing, in both style and substance, than that of their Swedish counterparts.

So while numbers like the blistering “Annihilation Crusade” and the galloping title track may incorporate a wealth of searing, live-wire tremolo lines and keenly sharpened, razor-edged harmonies, these are balanced out by a plethora of devilishly dark and deathly riffs, not to mention a truly bombastic barrage of scourging blastbeats courtesy of drummer Michiel van der Plicht, while Sattler’s vehement vocal delivery remains as instantly recognisable, and utterly venomous, as ever.

And although this careful balance between moody melody and sheer metallic fury might make this album a tad too “accessible” for some of the more militant Death Metal fans, for my money it’s resulted in some of the band’s best – and, yes, most “dynamic” – material to date, from the grim and gritty grooves of “On The Wrong Side of the Wire”, and the frenzied blastery of “Close to Victory”, to the menacing death march of “Escape Across the Ice” (which tells the tale of the Tsarist “White Army” during the Russian Revolution).

Of course it’s not perfect, no matter how much I might wish otherwise. Both the intro (“A Call to Arms”) and the instrumental interlude, “Königsberg”, are a tad superfluous – in my humble opinion anyway – and track eight, “Breathing Through Blood”, is ultimately just a stock God Dethroned song, nothing more, nothing less, with little to recommend it over any of the album’s more intense and/or interesting numbers.

That being said, however, the doomy grandeur of “The 11th Hour”, serves to close the album (and the trilogy as a whole) on an impressive high note, all sombre melody and booming, brooding riffs – along with some surprisingly prog-tinged lead guitar work – as befits the sober and solemn nature of the subject matter.

In the final reckoning The World Ablaze is exactly the sort of triumphant return for God Dethroned that so many of us had been hoping for, as well as a more than fitting conclusion to the band’s WWI trilogy.

I’m not quite sure where the quartet are going to go next… nor, it seems, are they, if some of the interviews I’ve read recently are any indicator… but let’s hope it doesn’t take them another seven years to produce their next album!

The World Ablaze will be released by Metal Blade on May 5.