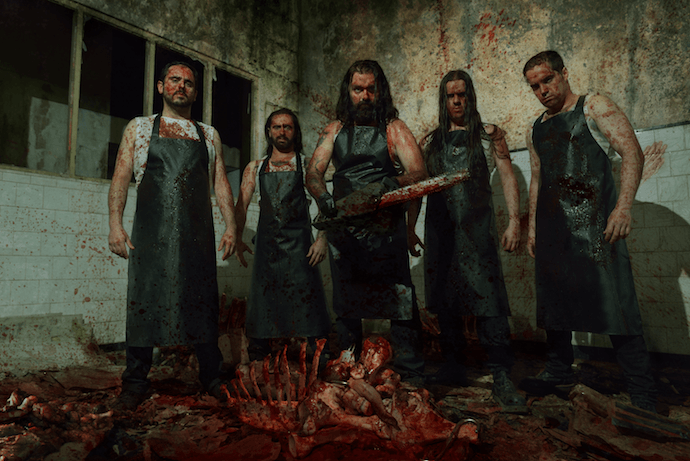 The gruesomely brutal Portuguese death/grind band Holocausto Canibal released their first demo oPus I in 1998 and followed that two years later with their debut album Gonorreia Visceral — and they haven’t relented in their slaughtering since those savage beginnings, with an ever-growing discography that has included more albums, splits, EPs, and a live recording.

Reflecting back on two decades of mayhem, the band decided to re-interpret and re-record the songs on those first two, long-unavailable early releases, and the result in this 20th year of the band’s existence is a new album named Catalepsia Necrótica: Gonorreia Visceral Reanimada. And yes, although the original compositions date back to the early days of the Oporto extreme metal scene, the re-working of the tracks and the use of modern recording technology really does make this a new album — one that was mastered by the legendary Dan Swanö at Unisound.

The album was officially released on April 28th in a variety of formats by a consortium of labels, but we’ve agreed to bring the full on-line stream of this riveting monstrosity to you today. 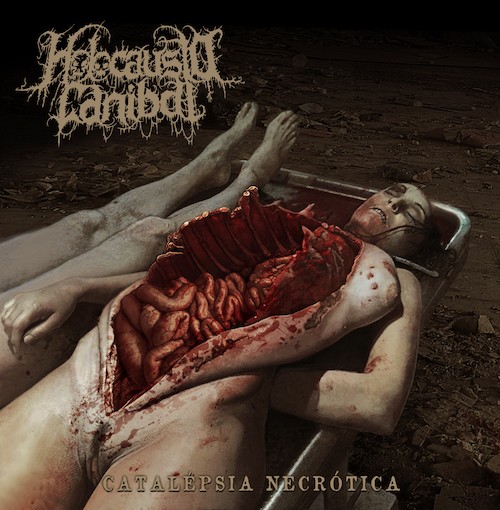 Commenting on this new release, bassist and founding member Z. Pedro has said:

“This re-recording and reinterpretation with today’s line-up and technologies is something that we couldn’t even think about when this first songs were wrote. If someone told us back then that someday we would be touring America or Europe, like we did in the last few years, we would probably laugh ourselves off, but the reality is that we’re still here, trying to bring you the feeling of the 90’s Oporto extreme metal scene that we all love and grew with and playing the same style we choose in our first rehearsal ever: Death Gore Grind.”

The album includes 13 tracks and a total playing time of 32 minutes, and it provides variations in sound and style — but everything is ferocious and obliterating.

The album is front-loaded with short, blazing-fast barrages of gore-splattered death/grind, unleashing frenzies of deep, razoring riffs, jet-fueled drum pummeling, and beefy, grinding bass. The songs are furious, but not rampantly chaotic — because they’re segmented by brutal, skull-busting grooves. And throughout the instrumental obliteration, you get a heavy dose of horrific roaring gutturals that are indeed cannibalistic.

The album also includes longer tracks in the 3-4 minute range, which display more dynamics in their pacing as well as lacings of bleak melody and a scattering of deranged solos. “Instintos Necrófilos”, for example, begins as a mid-paced thunderer, heavy and hard enough to fracture pavement, while “Carnificina Psicopata” makes room for a dismal, atmospheric melody and a slithering bit of guitar soloing.

But even in these longer songs, the band explode in bursts of highly accelerated riffing and drumwork, displaying the kind of speed, technicality, and absolute carnivorous viciousness that marks the shorter rampages.

And on top of all that, the band don’t let you forget that horror and gore are their meat and potatoes, scattering the sounds of sharpening knives, terrifying feeding, wretched screaming, and other mini-soundtracks of terror throughout the album.

In a nutshell, this is a half-hour well-spent for fans of death, grind, and blood splatter. 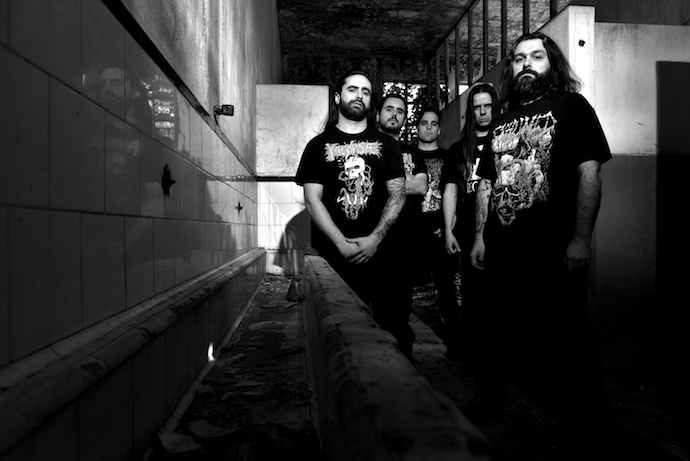 Catalepsia Necrótica: Gonorreia Visceral Reanimada was recorded and mixed at the HNK Studios (Portugal) by Max T. (Colosso, Grunt) and — as mentioned above — it was mastered at Unisound Studios in Sweden by Dan Swanö (Bloodbath, Necrony, Nasum, Dark Funeral, Marduk, etc.), with artwork by Raphael Gabrio and layout by Phobos Anomaly Design.