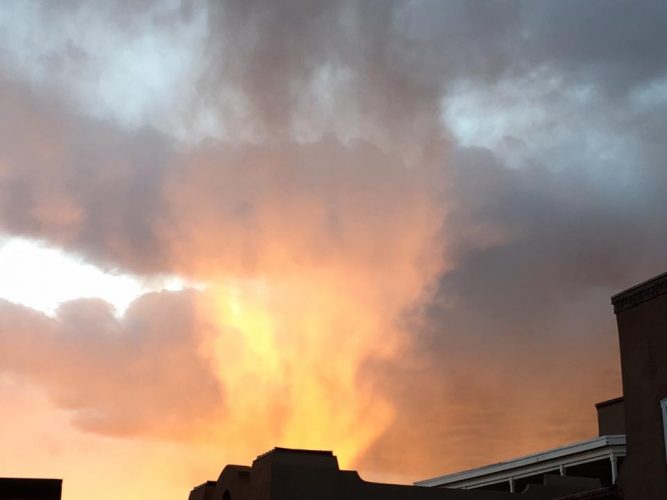 It looks like that building went volcanic, doesn’t it? It’s actually just an interesting effect of the setting sun on a strange cloud formation, viewed from a sidewalk in Santa Fe, New Mexico, last night, which is where I’ve been since Friday.

Like last weekend, I’ve set blogging aside for this weekend because of another mini-vacation with my spouse. Today we’re driving to Roswell to visit a relative. I don’t expect to see UFOs or experience probing of orifices by alien visitors, but it is Roswell, so who knows?

I have a few posts written by other people that I’ll be putting up on the site on Monday, and I’ll be back in Seattle by Monday night, so by Tuesday we should be back in normal NCS mode.

I should probably go ahead and say that next weekend will be like the last two. My wife and I will be making yet another trip for family reasons, and I doubt I’ll get any posts written for NCS next weekend either.

Here’s a video for the title track to Mutilated and Assimilated, the new album by Chicago’s Broken Hope that will be released by Century Media on June 23. The song and video pay tribute to John Carpenter’s The Thing.