The brutish compulsions and unforced vices of daily life pour us like hot clay into forms. We move and solidify into shapes, and twist into shadows. Never quite as solid as stones, but at risk of freezing in our steps. The poison of implacable cell death leeches us from our first breaths, but provides a bargain — there is glory to be found in those breaths, if we can only find it before it is too late.

All of this doom, and all of this potential for exultation… art has ever sought to capture the experience. Probably, the intensity of our creeping and bounding on the edge of the precipice can’t really be captured by art, but Dødsengel come very close. Perilously close. 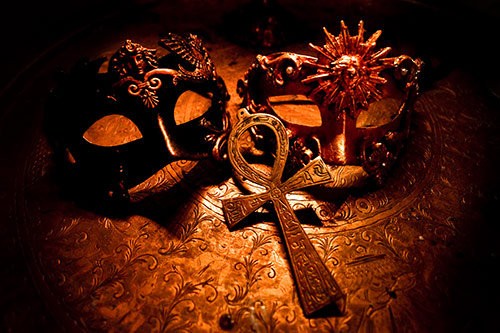 Walt Whitman coined a beautiful phrase in the name of his poem, “I Sing the Body Electric”, and followed it with these verses:

I sing the body electric,
The armies of those I love engirth me and I engirth them,
They will not let me off till I go with them, respond to them,
And discorrupt them, and charge them full with the charge of the soul.

I don’t claim to fully understand these words, and I damned sure don’t claim to understand the full panoply of what Dødsengal have wrought on this new album you’re about to hear, but I do believe that, like Whitman, they have stretched to capture the terror and the ecstasy, the hopelessness and the exultation, the frenzy and the futility, of our chaotic lives. They’ve stretched further than most, and they’ve come closer than most.

And with that, I’ll leave you to dive into this evocative well of emotions. It may fuck you up, and it may also snap some of the chains that tie you down. Either way, it’s an intense, dramatic, unpredictable, glorious experience that shouldn’t be missed.

This is Interequinox. And this is more of Whitman:

“Mad filaments, ungovernable shoots play out of it, the response likewise ungovernable….”

The album is available today (May 19th) at the Debemur Morti Productions webshop on digipack CD, 12″ LP, and special edition 12″ LP at this address:

And on Bandcamp here: