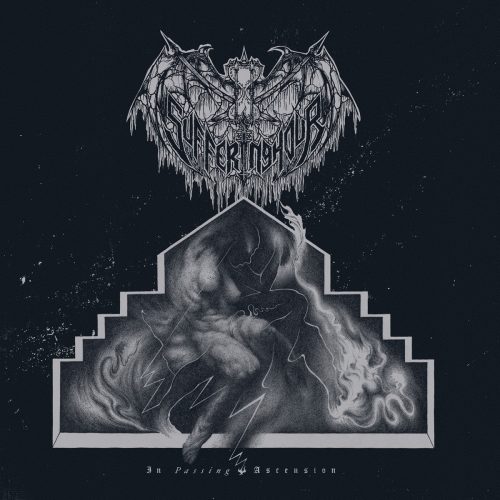 Suffering Hour’s In Passing Ascension is the kind of debut album that makes an immediate positive impact because it so convincingly displays the band’s sure-handed mastery of their own sound, and because it’s a soundscape that’s distinctive rather than a re-treading of long-familiar territory.

At a very high level, the album inventively fuses dissonant black metal and harrowing death metal to create an experience that’s both eerily atmospheric and punishingly heavy, full of fire-storming ferocity and skin-shivering otherworldliness — and it somehow manages to be quite memorable as well as persistently unsettling. It’s our pleasure to bring you a full stream of the album today, in advance of its release by Blood Harvest on May 26th. 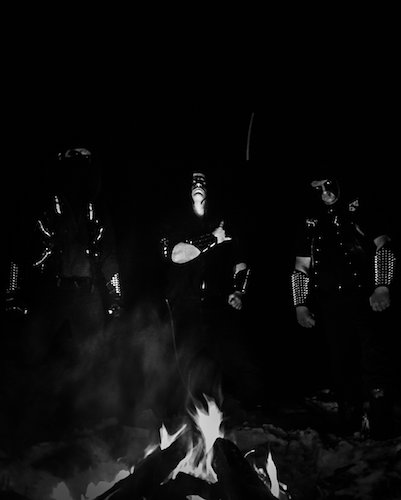 This Minnesota group have referred to their music as “cosmic blackened death metal” that draws influence from such diverse bands as Mgla, The Chasm, and Dead Congregation, which of course are damned good sources of influence. Yet, while accurate, those influences don’t capture all the album’s facets.

The music is consistently dynamic and often intricate, the songs arranged in a way that keeps a fierce grip on the listener’s attention throughout the album. The band also perform their compositions with impressive technical skill, yet the songs don’t come across as exhibitions of needless instrumental athleticism. The band aren’t out to simply strut their stuff; every passage seems well thought-out and essential to the music’s grand and gruesome design, without any displays of excess.

The writhing and warping riffs and discordant arpeggios generate sensations that are ominous, alien, and even hideously horrific, while the groaning bass lines and thundering drumwork provide a deep, bone-rumbling undercarriage. The music seethes and swarms, reaching crescendos of fiery delirium, yet the band are equally adept at making the listener’s skin crawl with slower-paced movements that are oppressively dismal and poisonous. There are even moments on the album when the music gleams and sparkles — before Suffering Hour pitch you into another nightmarish void that chills the flesh at the same time as it’s causing the blood to rush.

The vocals are to be applauded as well, for although they’re barbarically ghastly, they are no more monotone than the music, ranging between cavernous growls, serrated howls of furious savagery, and cries of splintered-brain derangement.

And by astutely harnessing all of these qualities, and applying a knack for writing well-crafted songs, Suffering Hour create extreme music that’s dissonant and disorienting, mystical and marauding, psychoactive and psychotic, labyrinthine and lurid, heavy and harrowing, arcane and endlessly arresting — and consistently involving, as they draw you into their twisted wormholes of sound. It’s one of the most impressive and enjoyable death metal albums I’ve heard this year, and I hope you come away similarly impressed.

In Passing Ascension is set for international release on May 26th via Blood Harvest Records on both CD and vinyl formats. The distinctive cover art was created by Alexander Brown.

7 Responses to “AN NCS ALBUM PREMIERE (AND A REVIEW): SUFFERING HOUR — “IN PASSING ASCENSION””