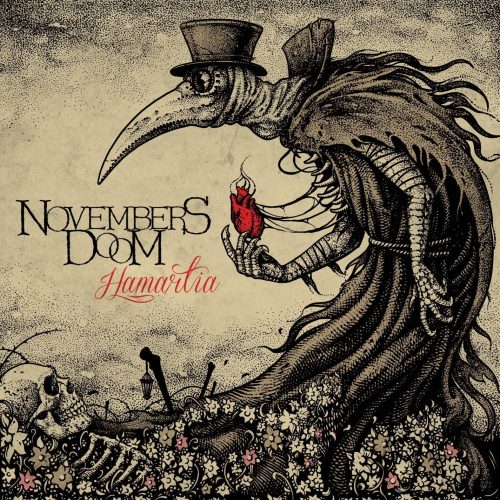 (This is Andy Synn’s review of the new album by Novembers Doom, released in April.)

This past weekend in Baltimore I was… well, “harangued” might be too strong a word… by DGR for failing to produce a review of this album, something which I’d apparently promised to do several times over the last couple of months.

So, suitably admonished and abashed, here’s my attempt to fulfil my obligation, starting with a little bit of historical context for those of you who enjoy that sort of thing. 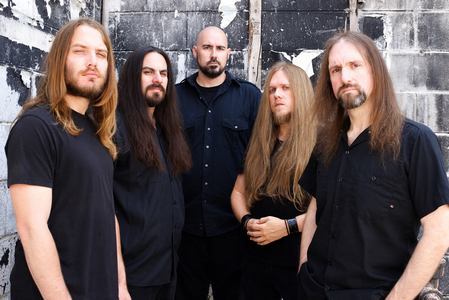 My history with Novembers Doom goes back a good ten years now, starting with my discovery of The Pale Haunt Departure, and I’ve remained a steadfast and stalwart fan of the band ever since, following them through all the ups and downs of their career, and gleefully devouring every morsel of their signature death-infused doomery along the way.

It was only at last year’s MDF that I was finally able to see the band perform live, however, and although the circumstances (on an outdoor stage beneath the heat of a late afternoon sun) may not have been the ideal way in which to finally experience their particular brand of metallic melancholy, it was still well worth the wait, and a real joy, for me personally, to finally get to see and hear in a live setting the songs I’d grown to know and love.

It helps of course that Kuhr and co. – while always a reliably consistent band overall – are currently in the midst of a late-career resurgence, with their most recent material not only garnering some impressive critical acclaim, but also showcasing some of the best, and most well-written, work of their career.

So of course the big question now is, how does Hamartia measure up?

Right from the bat, with the seething riffs and deathly hooks of “Devil’s Light”, it’s clear that this album doesn’t represent any sort of major departure from the sound of its predecessors – and why should it?

After all, the band have long since found and forged their own distinctive sound, and it remains a fertile field in which to compose and create despite the group’s well-earned veteran status, so to try and change purely for change’s sake would be foolish in the extreme

That being said, Hamartia isn’t a carbon copy of either Aphotic or Bled White – rather, it’s a delicate refinement of the same fatal formula, with perhaps a touch more gothic glamour sprinkled in among the rumbling Death/Doom riffs and ever-so-slightly progressive structures which characterise these ten tormented tracks.

Standout songs (in addition to the aforementioned “Devil’s Light”) include the darkly anthemic “Plague Bird” and the gorgeous, unabashedly proggy strains of “Ghost” (which, together, make for an instantly impressive opening triptych), along with the stripped-down solemnity of the title-track and the utterly spellbinding “Zephyr” (which helps demonstrate that the album is not an entirely front-loaded affair), though in truth there’s not really a weak link to be found here.

Whether it’s the slightly Katatonia-esque “Ever After” or the dynamic harsh/clean, quiet/loud delivery of tracks like “Apostasy” and “Miasma”, there’s a grim and gloomy charm to this album which should help it find a home in the hearts and minds of fans both new and old, with vocalist Paul Kuhr in particular putting in one hell of a performance behind the microphone, especially when it comes to his always expressive, almost painfully emotive, clean vocals, which take centre stage here like never before.

Concluding with the pensive melodic majesty of “Borderline”, in the final reckoning Hamartia is yet another feather in the band’s already over-stuffed cap.

And although the decision to focus on mood and melody to a greater extent than ever, at the expense of some of the more deathly moments with which the band are usually associated, might be a little off-putting to some, ultimately it just goes to show that – although progression is almost always a laudable aim – sometimes all you really need to do is pour your heart and soul into writing some truly great songs.