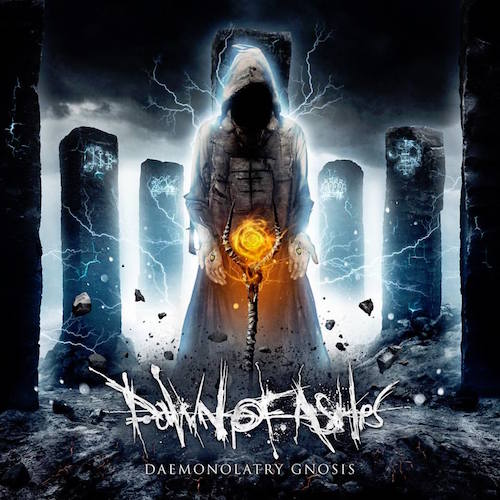 Now more than 15 years into their career, Dawn of Ashes has undergone more than one musical transformation, reflecting the evolving interests of the band’s founder, composer, and frontman Kristof Bathory. The band’s current musical character is on display in their new album Daemonolatry Gnosis, which will be released by Metropolis Records on June 9th, and as you’re about to discover through our premiere of a full album stream, it strikes (and shakes) the earth like an imperial hellish leviathan.

On this album (which was mixed and produced by Mick Kenney of Anaal Nathrakh), Bathory is joined by guitarist Raum, bassist Angel Dies, keyboardist Behemoth, and drummer Rage, and it includes a guest vocal performance by Cradle of Filth’s Lindsay Schoolcraft on penultimate track “Magick of the New Aeon”. 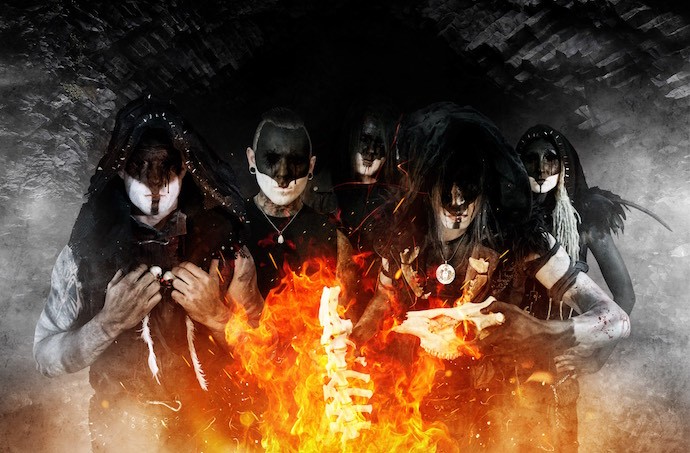 In genre terms, you can think of the music as a striking example of symphonic black and death metal, one that’s relentlessly dramatic and staggeringly powerful.

The album begins in gripping fashion, with the first two tracks setting the stage for a terrifying pageant that sounds like a the struggle of titanic forces at the end of the world. Opener “The Initiation” provides a dramatic symphonic introduction that builds from long, slow horn blasts and booming percussion to an intense crescendo, which leads directly into the power of “Gods of the Antinomian Path”, which sets the template for most of the music that follows.

“Gods…” is a bombastic track that strikes with shuddering force thanks to bursts of hyper-speed drumming, the battering piston drive of blast-beats, a huge low-end surge, and furious, skin-shivering roars and wild shrieks. As is true throughout most of the album, the melody is carried through a sweeping symphonic overlay, augmented here by the sound of soaring choral voices and the pulse of flying violin strings.

This combination of jolting force, panoramic sweep, and ferocious vocal passion is a hallmark of the album. While the crushing effect of the riffing shouldn’t be underestimated, the orchestral arrangements are the key ingredient in most of the tracks. Some examples of symphonic metal fall prey to excessive theatricality and shallowness, but the orchestral music here gives the songs emotional depth and a sense of magisterial demonic grandeur, while cloaking them in ominous darkness. Dawn of Ashes sweep you up in their infernal storms and leave you nearly breathless.

Even the relatively slow, grim march of a track like “Augoeides” is an intense (and soul-chilling) experience. And even when the band step away from the orchestrally dominated main course of the album, as they do (for example) in the pneumatic “I Am Nephilim” (which has a flavor of deathcore), they still get the blood rushing. To add further variety, the band also pick a few moments to sprinkle their creations with electronica, perhaps as a reminder of their earlier days.

The album ends with two songs worth a separate mention. As noted above, “Magick of the New Aeon” features the soaring crystalline power of Lindsay Schoolcraft’s voice, which gives the song a mystical (and beautiful) aura — though it culminates in an explosive finale. And the closer is a vibrantly frightening and multifaceted cover of Mayhem’s “Freezing Moon”, which features the album’s lone extended guitar solo (a really good one) and a truly amazing vocal performance.

Look for the album at all major digital outlets on June 9th. You can pre-order it now at Metropolis Records and at Bandcamp:

7 Responses to “AN NCS ALBUM PREMIERE (AND A REVIEW): DAWN OF ASHES — “DAEMONOLATRY GNOSIS””