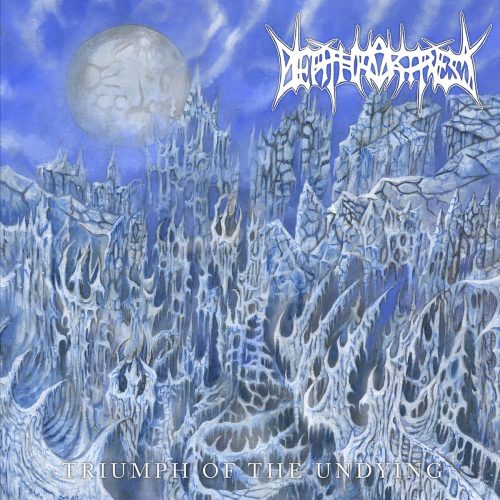 Following the release of their debut album, Among the Ranks of the Unconquerable, New Jersey triumvirate Death Fortress quickly became one of my favourite Black Metal acts of the modern era.

Heck, I’d even go so far as to say that they’re one of the very best Black Metal bands ever to come out of the USA at this point.

As a result, my expectations for this, their third full-length album, are practically sky-high, and I’ve been champing at the bit to get my hands on it ever since it was announced.

So, now that the album has finally appeared online (with surprisingly little fanfare), it’s time to see whether the third time is (still) the charm.

If you’d harboured any doubts about the ability of Aversario, Warrior, and Eldridge to deliver the goods again so soon after the release of the fantastic Deathless March of the Unyielding, these should be quickly dispelled by the gloriously evil and shamelessly malevolent tones of opener “Storming Wrath”, whose every writhing riff, rippling blastbeat, and ravenous vocal part positively drips with malice and moody, morbid atmosphere.

The band’s melodic undercurrent is as deliciously dark and diabolically infectious as ever, imbuing tracks like “Warrior’s Mantle” and the raging “Battlefield Zenith” with a sense of grim, forbidding grandeur, while the sheer power and intensity of their delivery – each and every track a rampaging torrent of scything guitars and utterly ruthless drum work – remains undimmed and unwearied.

The sinister splendour and frenzied savagery of “Wisdom of the Unspoken” finds the band unleashing their fury without remorse or restraint, riding close to the very edge of chaos at times, while the biting hooks and bleak, frostbitten melodies of the title track effortlessly capture the menace and majesty of Black Metal in its purest, most unadulterated form.

Closing with the brutal, yet brooding, strains of “Underneath the Epoch’s Crown”, Triumph of the Undying proves itself to be not only the band’s shortest, sharpest, and most succinct album yet, but also a stunning entry – “old-school” without being outdated, “classic” without being clichéd, “raw” without being retro – into the ever-growing annals of Black Metal as a whole.

7 Responses to “DEATH FORTRESS: “TRIUMPH OF THE UNDYING””