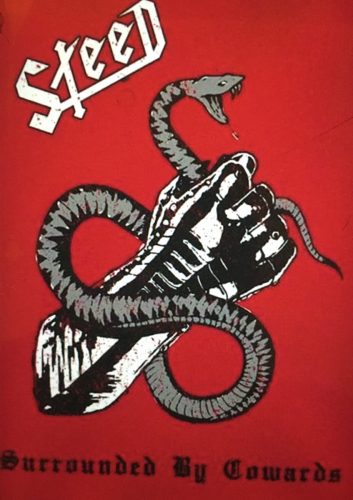 (Todd Manning rejoins us with a review of the debut album by Indiana’s Steed.)

In the age of all things old become new again, we often see modern day Metal musicians looking to the genre’s forefathers for guidance, and Indianapolis-based quartet Steed have certainly learned their lessons well. Their debut full-length, Surrounded by Cowards, was issued near the end of April courtesy of Small Hand Factory Records, who successfully tapped a similar vein recently with Kulthammer’s Oath.

The key here is Steed’s ability to meld the songwriting chops of the genre masters with the grit of today’s underground. Album opener, “Speed Weed Steed” sets the stage with its venomous mix of underground Thrash and Motörhead. There is an undeniable Punk edge to the proceedings as well, the kind of swagger that is sure to keep their audiences drinking and fist-pumping, engaging in all things lawless and belligerent.

Some tracks, such as “Sacred Seductress”, hint at a Doom influence, while “Pick Your Bones” displays a take on slow more akin to EyeHateGod. One constant though is that, fast or slow, there is very tasteful guitar work throughout, both in moments of harmonized bliss and in well-crafted solos. Steed creates a dynamic through tempo shifts and guitar solos more than in volume changes, but that isn’t really a problem. Surrounded by Cowards is the soundtrack to feral behavior, material that remembers Rock and Roll is supposed to be dangerous.

If one were to measure, the material tips more toward the old than the new, but for most of us, that might be Steed’s selling point. But still, all the bite and bile spewed forth on Surrounded by Cowards allows it to sit comfortably among most of today’s Metal bands. The marriage here reminds me a bit of Lair of the Minotaur’s debut Carnage, although they invoke a different set of Old School Masters. But the point is, Steed gets the alchemy correct, and any Metalhead will certainly hear that for themselves.