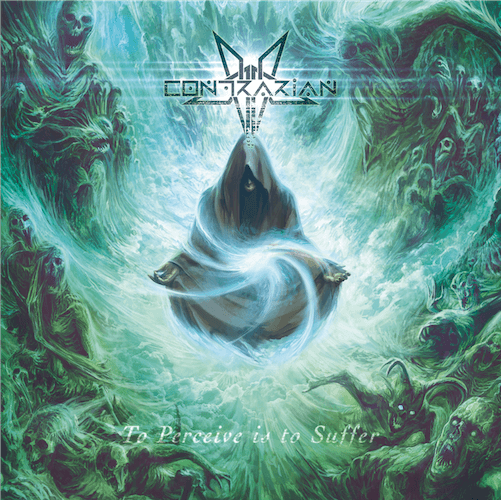 Contrarian’s 2015 debut album Polemic opened a lot of eyes across the breadth of metaldom, introducing listeners to this New York band’s remarkable technical skills and inventive, outside-the-box approach to song-writing. We had the pleasure of premiering the title track to Polemic, and today is like welcoming back an astonishingly impressive and eccentric old friend, because we again have a Contrarian premiere for you. This is a lyric video for a track called “Transcend the Mundane” from the band’s second album, To Perceive Is To Suffer, which Willowtip Records has scheduled for release on July 28. 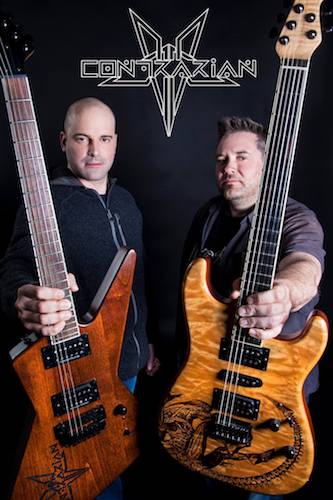 The album was mixed and mastered by George Bokos (Rotting Christ, StoneColdDead) at Grindhouse Studios in Athens, Greece, and his work allows the listener to experience the distinct contributions of each Contrarian musician, all of which are truly head-spinning, as well as George Kollias’ delivery of the lyrics, which is intelligible even though the words are expressed in a barbaric growl.

As displayed on “Transcend the Mundane” (and throughout the album as a whole), the physical dexterity of these performances is eye-popping, and yet as technically skilled as the musicians are, it might still be misleading to stick the “tech death” label on what they’ve created. It would be more accurate to brand this “progressive death metal”, in the sense of Chuck Schuldiner’s most progressive metal forays from Human forward.

“Transcend the Mundane” lives up to its name, because there is nothing formulaic or over-worked about this track. The music twists and turns, swoops and dives, spirals and swirls, rushes and relents, lumbers and leaps, with surprises galore. Yet for all its intricacy and all its mercurial, experimental qualities, it’s also fluid and cohesive — not simply a technical fireworks display (though it certainly is that) but a well-composed piece of music that never flies off the rails, and instead catches in the head.

You think back, and you remember the warm bubbling tone of Paulsen’s bass work, Mason’s scintillating solos, the rapidly cavorting fretwork of Jim Tasikas (and the heaviness of the riffs), and of course George Kollias‘ breathtaking drum acrobatics. But you remember the melodic motifs in the song as well, which tie the displays of instrumental extravagance together.

In a nutshell, this song is tremendous fun from the first listen, and just as much fun to hear over and over again.

To Perceive Is To Suffer again features eye-catching cover art by Marco Hasmann and it includes a cover of the Fates Warning song “At Fate’s Hands” (with guest vocals by Paul Masvidal). The album will be released on July 28 and pre-order links are below, along with a previously released stream of the album’s title track, the earlier lyric video for “Memory Eternal”, and of course our own premiere.

One Response to “AN NCS PREMIERE: CONTRARIAN — “TRANSCEND THE MUNDANE””