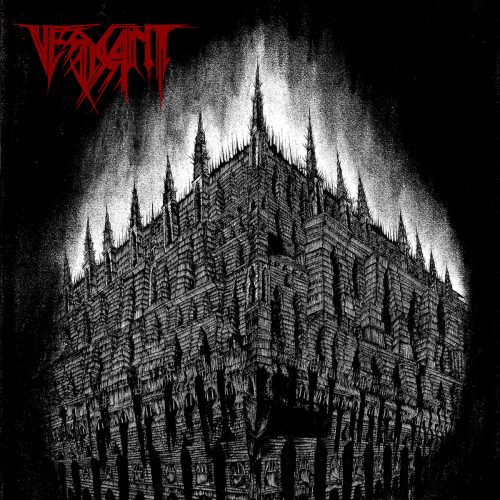 (New Zealand-based writer Craig Hayes (Six Noises) joins us again with this review of the new album by NZ’s Vesicant, which is being released today by Iron Bonehead Productions.)

New Zealand black/death metal duo Vesicant have only played a handful of shows, and their 2014 Edict demo was originally released in limited numbers, too. But that hasn’t stopped powerhouse German label Iron Bonehead Productions from stepping in to release the band’s formidable full-length debut, Shadows of Cleansing Iron.

If you’re wondering how an obscure band from the far-flung reaches gets to enjoy Iron Bonehead’s patronage, the answer is twofold. First, and most obviously, Iron Bonehead were clearly impressed by the stockpile of murderous music Vesicant have housed in their armory –– and we’ll get to those battering munitions soon. But it’s also well worth pointing out that Iron Bonehead’s shown a marked interest in NZ’s extreme metal scene over the years. 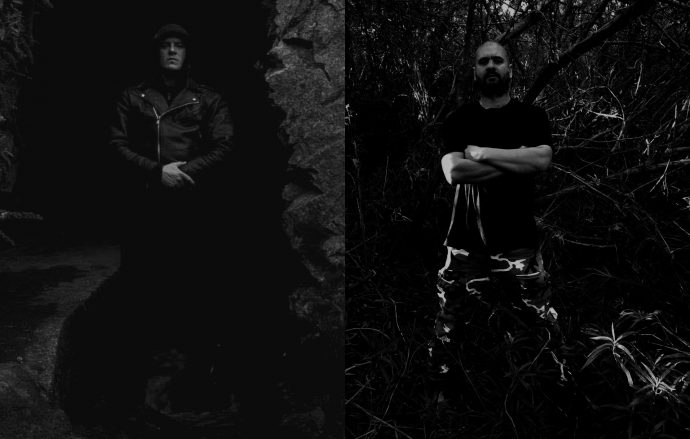 Iron Bonehead has released remorseless works from NZ bands like Vassafor, Sinistrous Diabolus, Diocletian, Witchrist, Heresiarch, Prisoner of War, Creeping, Veneficium, and two groups with indelible ties to the NZ metal underground, Bölzer and Verberis. Clearly, Iron Bonehead have kept a close eye on NZ metal. But that obviously doesn’t mean every underground NZ band gets a free pass to sign to the label.

What’s worked in Vesicant’s favor, in that regard, is that the band’s “world-eating” sound is born from that belligerent realm of Antipodean black/death metal that’s found a rabid audience internationally. That’s a realm influenced by the likes of Beherit, Blasphemy, Sarcófago, Bolt Thrower, Black Witchery, Bestial Warlust, Conqueror… the usual warmongers. And you only need to glance at the gigantic fortress on the cover of Shadows of Cleansing Iron to understand exactly what kind of barbaric barrage Vesicant will be delivering.

Vesicant’s skull-cracking music deals in “the abject horrors and untold abysmal affliction” of the First World War. However, Profanum, who plays guitars and bass on Shadows of Cleansing Iron, and Mordance (Temple Nightside, ex-Impetuous Ritual) who drums and provides vocals on the album, don’t just underscore the psychological and physical costs of war. The duo also pay tribute to heroism and sacrifice while, at the same time, noting war’s a sphere where “soil drinks up the blood… ambivalently”.

Obviously, metal’s been exploring battlefields of the mind and body since day one. But Vesicant rise above the war metal pack because their ultra-aggressive and pitiless music calls to mind NZ bands like Diocletian or Heresiarch –– who are both famed for their inhumanity and brutality –– and that’s good creative company to keep. 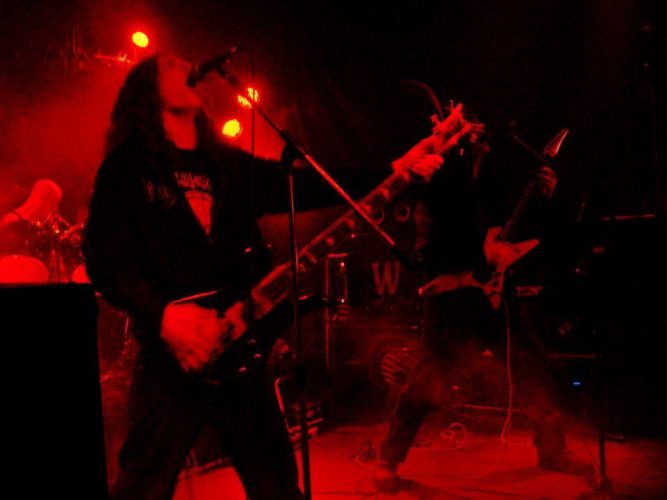 Heresiarch founder, N.H, engineered, mixed, and mastered Vesicant’s demo, and he played drums in the band for a time. And Vesicant certainly share a similar stylistic and thematic attitude to Heresiarch. That’s an attitude that maximises sheer sonic intensity. And from Shadows of Cleansing Iron’s apocalyptic opener, “Blood Miller”, to its asphyxiating final track, “Excoriation”, Vesicant deliver relentlessly savage and strident metal.

Brain-smashing salvos like “Shadow of Death” and “Carnage Ascended” might not be groundbreaking, as such, but they churn through downtuned and doom-drenched passages, carving out harrowing visions of viscera-strewn shell craters and slaughterhouse trenches.

The mind-numbing destructive scale of WWI, and the madness and terror therein, is right there as guttural vocals and hammering riffs pound the earth into fields of blood and ruin on “Dismal Oubliette” and “Uncoiled Desolator”. Throughout Shadows of Cleansing Iron, swarms of flechette-tipped riffs blast their way across merciless tracks, while the album’s bass-heavy and blast-beaten production leans hard on thick and choking atmospherics.

Vesicant deliver doomier-edged riffs too, and taking their finger off full-automatic increases their heaviness. But if you’re not a fan of chaotic and conflict-fuelled metal already, then Shadows of Cleansing Iron isn’t going to change your mind.

The strengths and limitations of dissonant, bestial metal are well known. It’s a love it or hate it arena, and that’s where Vesicant do battle. They make zero compromises on Shadows of Cleansing Iron, delivering an obliterating wall of noise with overwhelming concussive force. Any NZ black/death metal band doing that is inevitably going to be compared to indomitable NZ bulldogs like Vassafor, Diocletian, Witchrist, and Heresiarch. But that clearly hasn’t intimidated Vesicant.

Shadows of Cleansing Iron marks the start of a single-minded, bloodthirsty campaign, and Vesicant are primed to conquer a lot of territory in the black and death metal realms.