The new EP, consisting of three interconnected songs, is named Within the Weaves of Infinity. It will be released on August 24th by Terratur Possessions on vinyl and CD and by Oration on cassette tape. However, as of today it’s available digitally via Bandcamp. We have the full stream below, along with some impressions of the music and news of a forthcoming Sinmara tour. 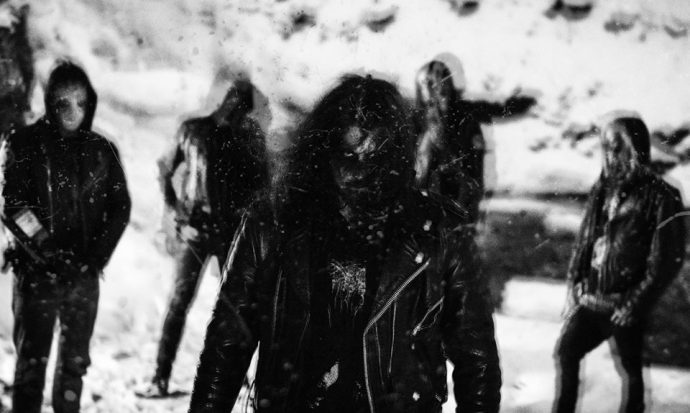 Aphotic Womb was an arresting album, but listening to Within the Weaves of Infinity gives the impression that Sinmara pushed themselves even harder this time, reaching for even greater heights, and the result is a terrifically dramatic and wholly immersive experience. The songs flow together, creating an almost relentlessly intense and spine-tingling suite of unearthly perils. The title of the EP itself seems to announce grand ambitions, and the music delivers on that promise.

These are dense, pulse-pounding storms of sound — intricate, well-plotted, and gripping. The music is otherworldly in its atmosphere, creating a sense of grim pageantry, like a portrayal of an armageddon in which vast, superhuman forces rage in a final harrowing conflict. Though it would be misleading to call the music “symphonic”, it nevertheless brings to mind the grandeur, the power, and the richly textured tumult of an orchestra in a crescendo.

As those familiar with Aphotic Womb well know, Sinmara make use of dissonance to create unnerving tension and mind-warping sensations of interdimensional terror. But here, the dissonance is not overpowering; the songs also include waves of sweeping harmonious melody, albeit melodies that are melancholy, bereaved, hopeless, and yet at times heart-swelling in their evocative force. Swirls of shimmering lead guitar provide glimpses of ethereal yet eerie beauty within the cyclonic tumult. In one of the few moments on the EP (in “Ormstunga”) when the music’s surge fully subsides, chiming notes ring out mystically and mysteriously; you still don’t feel like you’re standing on familiar solid earth, but you’re now peering through a different dimensional membrane.

As on Aphotic Womb, the performance of the rhythm section on this EP is a standout. The drumming in particular is complex and often unexpected in its bursts of blasting and reverberating booms, while the deep flexing thrum of the bass enhances the sense that you have been brought within the presence of a storm — a storm that’s either building, raising the hair on your arms through the threatening electricity in the air, or a torrent that has fully broken open in a near-cacophonous fury.

The vocals match the music’s intensity. These enraged howls, often rising into fiery cries of exultation, or perhaps manifestations of a splintering sanity, add fuel to the frenzy, augmenting the sensations of paranormal delirium that come at you across the breadth of the EP.

Yet it’s worth repeating that there’s also something majestic and grand about this three-song trip, something “epic” that arches over all of it, a dimension of the experience that pulls you well out of yourself, beyond the soundscapes that are bleak, blasted, and hostile. It proves again that Sinmara are a force to be reckoned with. 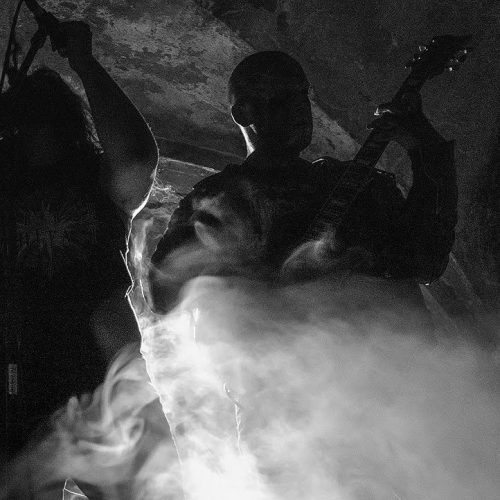 Within the Weaves of Infinity features artwork by Artem Grigoryev. It was produced by Stephen Lockhart at Studio Emissary. Pre-order links are below — and after our stream of the EP, check out the flyer for the Astral Maledictions Tour scheduled to run from November 30 through December 10, in which Sinmara will be joined by Sortilegia, Almyrkvi, and II. Check their Facebook page for further details about the tour. 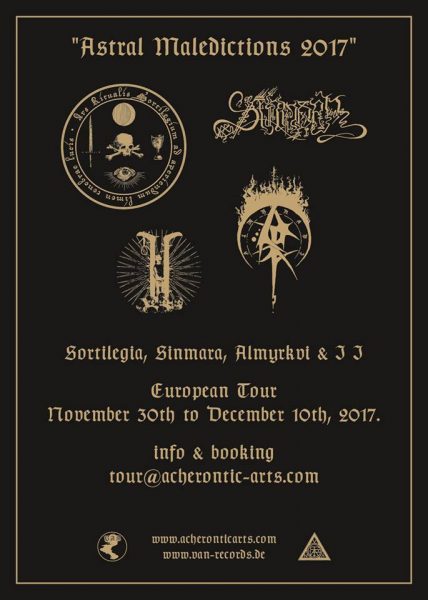