(Tomorrow — August 11 — Relapse Records will release the debut EP of Poison Blood, a collaboration between multi-instrumentalist Jenks Miller (Horseback) and vocalist Neill Jameson (Krieg). On the eve of that release we’re fortunate to host the premiere of a full music stream, introduced by this review from our editor.)

1993 was a remarkable year in which the landscape of second-wave black was being shaped by the likes of Darkthrone’s Under a Funeral Moon, Enslaved’s Víkínglígr Veldí, Immortal’s Pure Holocaust, Burzum’s Det Som Engang Var, Dissection’s The Somberlain, Ulver’s Vargnatt, Varathron’s His Majesty At the Swamp, Emperor’s first (self-titled) EP, and Strid’s End of Life. In the midst of all that, Beherit released Drawing Down the Moon.

That album seems to have come from a blood-freezing netherworld different from everything else around it in those halcyon days of creative upheaval. Even heard today, it still sounds unlike almost everything else that claims the increasingly amorphous (and often abused) label of “black metal”.

The album is “stripped-down” — minimalistic to the point of sounding primitive and brutish. Rather than rushing like a wildfire in a gale, it’s often mid-paced — though still staggeringly savage. The sound is heavy as hell and with a kind of clarity that distinguished it from the whining and whirring lo-fi ear abrasion of many of its peers — though somehow still sounding as ugly and evil as a stockpile of sin.

It summons images not of Lucifer as the majestic Fallen Angel, but as Lucifer the rutting goat lord. The album leaves a stain on your soul that you might think no amount of cleansing will ever purge — but it nonetheless exerts a powerful magnetic kind of attraction on a primal level.

And so where am I going with all this talk of Drawing Down the Moon? I’m getting there…. 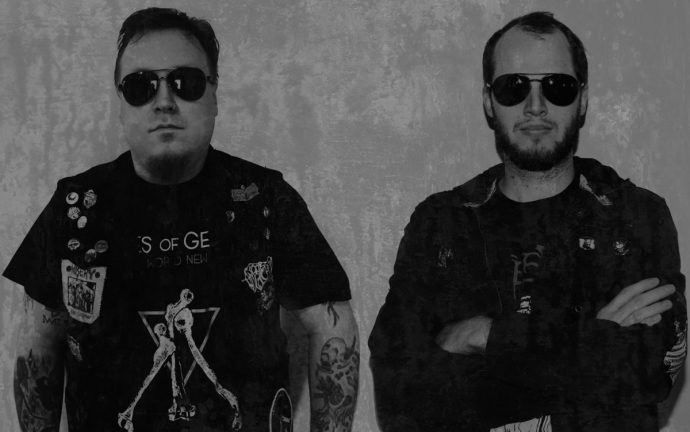 We are told that the members of Poison Blood — Horseback’s Jenks Miller and Krieg’s Neill Jameson — were drawn together in this collaboration not only by a mutual admiration of each other’s past work but also by a shared appreciation for Beherit’s landmark 1993 release. You can hear it in their debut EP — and if you choose to spend your time dissecting these songs like a pathologist in the morgue, you can hear a lot of other stylistic ingredients as well (including dungeon synth and punk and deathrock)

In fact, the EP sounds like it could be a love letter to a range of influences from decades past that mean something to both men (not all of which are black metal), though I don’t mean to suggest that there’s anything romantic about what they’ve done here (unless you count bouts of orgiastic thrusting as romance).

The thing is, although you might be able to pick out all the influences if you were a certain kind of educated listener with a certain kind of thorny roots in the underground, you’d still have a very hard time imagining in advance how Miller pulled the ideas together in this EP.

As you might expect from what you’ve read about the inspiration of Beherit’s classic, there’s a kind of stripped-down minimalism in these songs. And just as one of the signal aspects of Drawing Down the Moon is the guitar tone achieved on that album, there’s a similarly striking quality to the tones that Miller coaxes from his guitar (and from the drums). It’s often a thick, pestilential, filthy, and even queasy sound — but Miller also laces songs like “Deformed Lights” and “From the Lash” with psychedelic, hallucinatory leads that come from a different place.

The tracks on the EP are short (two of them don’t even reach a minute), and that’s in keeping with the minimalistic themes of the compositional approach. But it’s still a twisting and turning trip, and all the tracks get their hooks in, whether you’re being subjected to mid-paced cruelty or turbine-driven rampages or frenzied raking and clawing.

To pick out just a few examples of those twists and turns, “Myths From the Desert” includes not only massive pounding and stomping but also d-beat punk rhythms, and a rising, almost chiming melody that seems to convey a kind of ecstasy, while “A Cracked and Desolate Sky” is urgent, orgiastic, ravenous, and frightening — and it also hits a rocking rhythm with a hellish stench in the tone of the chords. “The Flower of Serpents” is one of those sub-one-minute tracks, and it comes out of left field like an homage to the roots of dungeon synth, followed by the equally brief “Shelter Beneath the Sea”, which is a barrage of lashing punishment and thundering destruction.

The final surprise is the one track on the album that tops four minutes, the closer, “Circles of Salt”. It begins with a slow, distorted, sorrowing keyboard melody, joined by a second melody that seems to lift and shine with unearthly light. Miller eventually locks into a head-hammering rhythm, and the music achieves a kind of whirling grandeur, almost like an accordion and a bone flute accompanying a folk-like dervish dance.

Not to be outdone by his comrade Miller, Neill Jameson turns in another one of those vocal performances in which he seems to have held nothing back, sounding as if he went someplace in his head where he couldn’t live on a daily basis and still make it through to midnight. The result is a roaring and howling explosion of near-inhuman intensity that puts the hairs up on the back of your neck.

In a nutshell, Poison Blood is one hell of a fine creation, and hopefully not the last of its kind from these two collaborators. They’re onto something too damned good to leave alone. But see for yourselves. Carve out about 19 minutes from your day and give this a full run.

One Response to “AN NCS ALBUM PREMIERE (AND A REVIEW): POISON BLOOD — “POISON BLOOD””