(On September 15, Luxor Records will release a new album by A Hill To Die Upon, and here we present Andy Synn’s review of the album plus a stream of its first single.)

There are certain artists who have, for whatever reason, become very special to us here at NCS.

Artists with whom we’ve built up a certain relationship, a certain rapport, over the years, to the point where they become essentially one of our “house bands”.

Illinois iconoclasts A Hill To Die Upon are one of them.

Having been fans of the group – now comprising original members Adam and Michael Cook alongside the newly-indentured Brent Dossett and Nolan Osmond – ever since their debut, following them through all the ups and downs, calamities and controversies, it’s been our privilege to watch them grow and evolve from plucky contenders into the veritable Blackened Death Metal powerhouse they are today.

It should therefore come as no surprise, if you’ve been paying attention, that the band’s fourth full-length album sees them continuing to develop and mature, stepping outside of the shadow cast by their forebears by, paradoxically, more fully embracing the blackened roots of their sound.

So hold onto your hats, it’s about to get biblical in here. 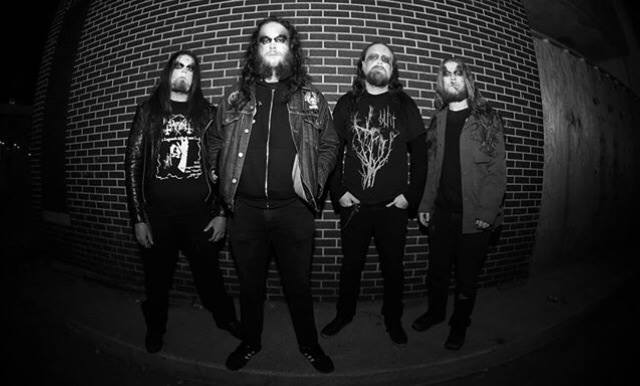 Whereas, on previous albums, the band’s primary touchstone was the swaggering sturm und drang of Behemoth, the material which makes up Via Artis Via Mortis showcases a notable shift away from the blast-furnace Death Metal which fuelled the group’s earlier works towards an altogether darker, arguably less extreme (but no less effective), approach which recalls – to a greater extent than ever before – the classic works of the mighty Immortal.

That’s not to say that the group have suddenly changed their spots without warning of course. After all, several of these tracks (such as “Jubal and Syrinx”, the album’s first full track, as well as the band’s pick for the album’s first single) still retain a hefty amount of Death Metal in their DNA – but there’s clearly a greater focus on song-writing and storytelling at play here than ever before.

Blastbeats, for example, are deployed much more selectively this time around, while the increasing use of menacing melodic lead parts (such as the chillingly effective solo work that permeates “Artifice Intelligence”, or the spellbinding refrain that crowns the triumphant “The Garden”) to accent the plethora of cruelly catchy riffs on display across these nine tracks adds a fresh new string to the band’s bow, one which they seem to have every intent on exploiting to its full potential.

Even the vocals seem to have taken on a slightly higher register, one more perfectly designed for conjuring compelling images and pulling hideously infectious hooks out of thin air (though, for those of you craving a bit more guttural gruesomeness, Mark Kloeppel of Misery Index pops up on the menacing “Sorcery and Sudden Vengeance”, which also contains one of the album’s rare moments of blast-driven bombast, to add some extra grit and grime to the proceedings).

Songs like the moody, keyboard-infused “I Was There When You Went Under” and the brooding, blackened textures of closer “St. Cocaine” epitomise the band’s increased focus on narrative and drama, an approach which is less about pulverising the listening into submission through sheer intensity, and more about drawing them deeper into the story, where they can experience the rough grain of the riffs and feel every note of every malevolent melody in intimate fashion.

Even the album’s simplest and most straightforward track – the no-nonsense “Mosin Nagant” – still offers a compelling enough justification for its inclusion, while the undeniable high point of “Great is Artemis of the Ephesians” is, wordy title aside, one of the most driving and dynamic tracks the band have ever penned, featuring some truly impressive interplay between drums and guitars, not to mention a wealth of utterly irresistible melodic and metallic hooks.

So are A Hill To Die Upon now the rightful heirs to the icy throne of Blashyrkh?

After all, the true kings of northern darkness, though currently divided, may yet return to reclaim their crown. Plus you get the feeling that AHTDU would much rather forge their own kingdom, than inherit someone else’s.

And, on the strength of this album, perhaps it’s high time for all of us to pledge our allegiance?

Preorder on iTunes and Amazon.

19 Responses to “A HILL TO DIE UPON: “VIA ARTIS VIA MORTIS””