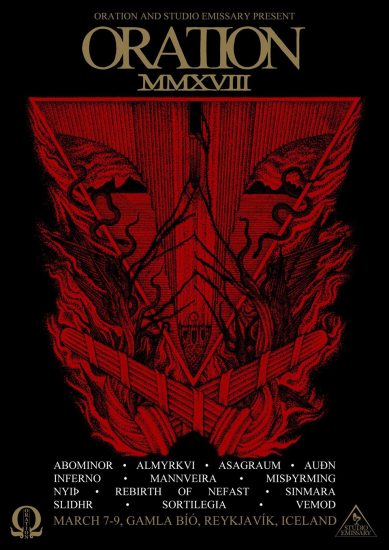 Yesterday Oration Records and Studio Emissary announced the first group of bands for next year’s edition of the Oration fest in Reykjavík, Iceland, which will take place on March 7-9, 2018, at the Gamla Bíó venue. As you can see from the flyer above, the bands announced yesterday are as follows:

I’ve wanted to visit Iceland for a long time. I think 2018 will be the year when I finally do it.

Tickets for the festival will go on sale October 2. Additional bands will be announced in the coming months. For more info, watch these spaces: 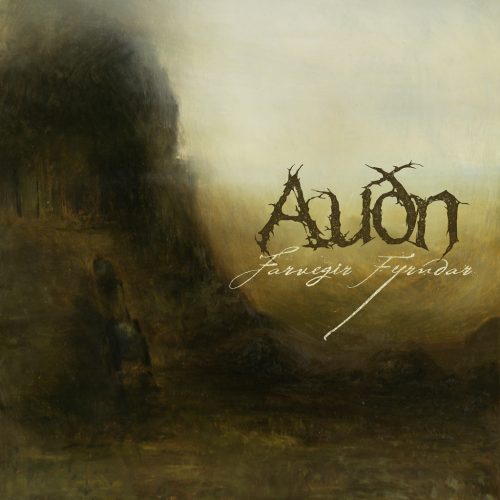 To begin this week’s collection of new black metal I have a song named “Í Hálmstráið Held” by the Icelandic band Auðn, who coincidentally are among the groups identified in the first roll-out of names for Oration Fest.

The song below is the closing track from Auðn’s forthcoming second album Farvegir Fyrndar. Season of Mist plans to release it on November 10. It races like the wind, with a melody that seems to pulse and then soar within the rush. As the speed subsides, the tumbling drums and gliding keyboards give it a mystical presence, and the trilling lead guitar causes it to gleam and glow with a haunting light.

You’ll also feel an edge of despair in the music, and that feeling is due in part to the wrenching intensity of the vocals. An emotionally powerful song for sure. 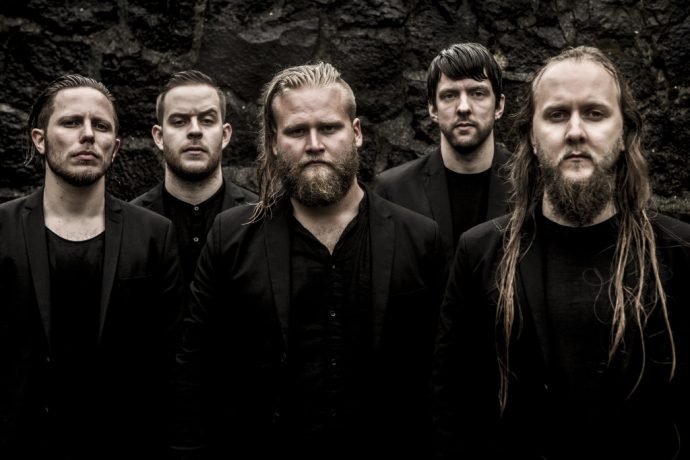 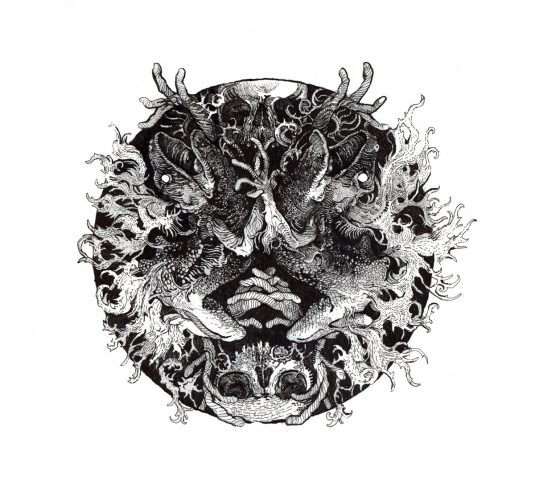 A Pale December are a duo who make their home in Milano, Italy. Their debut album The Shrine of Primal Fire was released on July 27. The album is described as “a coherent journey through the most sublime, yet dismal, aspects of nature and myth; a voyage which ultimately merges with a reflection on the human condition and its fleeting nature”.

This is one of those instances when I should be attempting to write a more thorough review of the album but am instead only commenting on one song, for fear that I won’t get around to saying more.

“The Path of Stars” opens the album, and it’s a fantastic opener, one that will pull you headlong into the album, if you’re like me. The combination of a dramatic booming drum rhythm and rippling melodic notes (which sound as if voiced from some archaic instrument) in the opening seconds of the track also pulled me headlong into the song itself.

As the energy and drive of the song grow in intensity, it just becomes more gripping, combining folk-influenced melody from centuries past and soaring clean vocals with machine-gun percussion and barbarous howling. The passion in the music is communicable, like a pleasant disease that swells the heart. The folk instruments return in an interlude before the finale — a combination of flute and differing strings — and there’s even further instrumental variety after that.

The Shrine of Primal Fire is well worth exploring in full. It’s a dynamic, multifaceted experience that  succeeds in transporting the mind to different worlds. 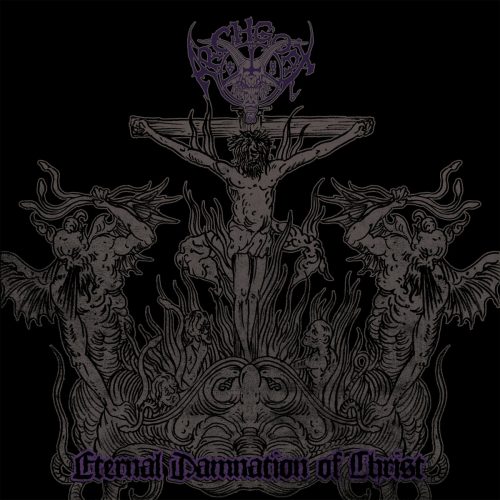 Adjectives like “primitive”, “sinister”, “intimidating”, “putrid”, and “uncompromising” appear in the press materials for the latest release by Archgoat, and of course we would expect nothing less from these merciless satanists, who have been practicing their demonic methods of musical desecration since the late ’80s.

The new release is a two-song 7″ EP named Eternal Damnation Of Christ, created entirely by Ritual Butcherer, which will be released on September 29 by Debemur Morti Productions. It’s described as a prelude to a new full-length coming in 2018.

At present, the two songs are streaming exclusively at Debemur Morti’s web site, so I can’t embed them here, but I’ll leave the link below. “Black Mass Mysticism” sounds exactly like its title, with a stately and ominous atmosphere at first that evolves into differing shades of chilling cruelty and delirium as the rhythms and riffing change. The vocals are crocodilian throughout, as is the magnetic attraction of the music.

For the time being, the EP is being offered exclusively on the band’s upcoming European tour. I hope it will become more widely available at a later date. To hear the two songs, visit this location: 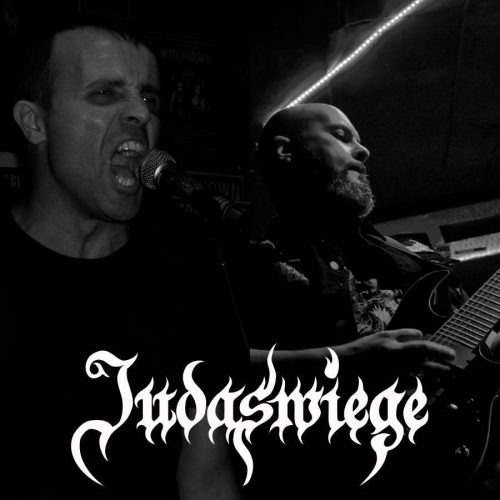 Judaswiege, a duo from Valencia and Barcelona, explain that their band name is the German word for “The Cradle of Judas,” an ancient instrument of torture used by the Spanish Inquisition. I did some further reading about the device (here), because I hadn’t heard of it, and it once again vividly and grotesquely displays the mind-blowing capacity of human beings to inflict unimaginable pain and humiliation on other human beings.

Judaswiege (the band) have uploaded three tracks to YouTube over the last few months, though I don’t yet know when or how these songs (and presumably others) will be released. Thematically, they all seem focused on the Inquisition — and the music in all three is a thrilling dose of thrashing, threshing, skin-flaying black metal.

All three also get their melodic and jolting rhythmic hooks in your head — and then whip your body around by the head. This isn’t just rampant bestiality; there are some very cool melodies and some eye-popping arena-ready solos lurking within the tracks, as well as changes of pace that deepen the mood of grim execution, and of course some killer riffs. The vocals are also suitably wild and scalding throughout.

I presume these three excellent tracks are a prelude to an album or an EP… I’m now really anxious for it to arrive so I can get these songs in my possessive clutches.