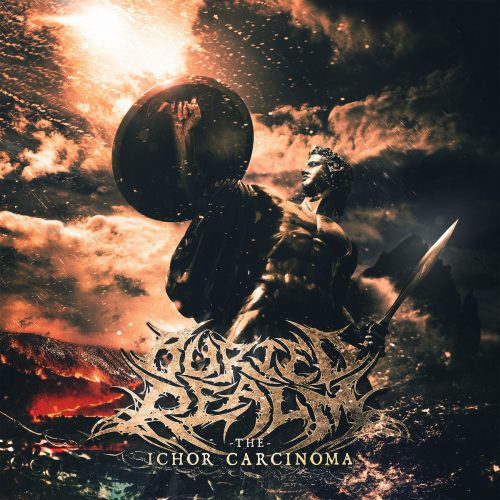 If you’re an experienced listener of extreme heavy metal, when you see the word “asphyxiation”, you might think of bleak, soul-sucking, oppressive sounds, like the sonic equivalent of a garrote tightening on your neck or an anvil on the chest. But the song you’re about to hear, which bears the name “Asphyxiation’s Lullaby“, is asphyxiating only in the sense that it’s so astoundingly exuberant and kaleidoscopic that it takes your breath away to hear it.

The song comes from The Ichor Carcinoma, the debut album of Buried Realm, which is the solo project of Colorado musician/vocalist Josh Dummer. On this album he proves himself to be some kind of instrumental wizard, and a vocal chameleon as well. But he has also surrounded himself with an array of guests that shines like a metal constellation in the night sky. 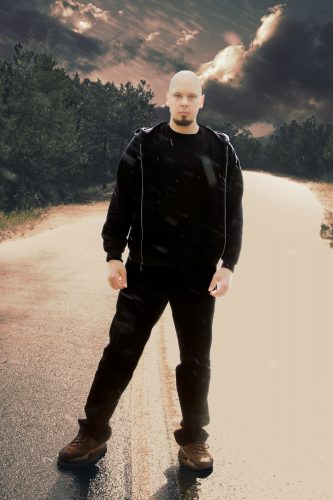 If that list doesn’t get your heart palpitating, this song certainly will. It begins with a flurry of jabbing, head-wrecking riffs and swirling, chaotic leads, followed by a pulsating, highly innervating melody and it roars toward a powerhouse finale of gut-punching chugs.

In between, you’re treated to a fireworks display of turbocharged rhythms and wide-ranging guitar pyrotechnics, alternately spitting fire and glimmering in a head-swirling glow, capped by an arena-ready solo that would raise a thousand pair of claws toward the sky, clutching invisible oranges. The vocals are just as varied, ranging from a mix of carnivorous roars and scalding shrieks to high-arcing clean vocals.

There is an interesting contrast not only between the explosive vibrancy of the music and the name of the song, but also between the sensations of the sound and the lyrical themes. As Josh Dummer explains:

“Lyrically, this song entertains the idea of entering the spiritual realm of sleep paralysis, and pulling through the depths of such darkness. Anyone that experiences this knows how freaky it is. Another aggressive and “in your face” tune. Teemu Mäntysaari (Wintersun) and vocalist Ryan Strain are featured on this one.”

I haven’t experienced sleep paralysis, though it sounds frightening. But the song itself is a different kind of thrill than the adrenaline rush that comes from fear. It’s as if Dummer was filled to bursting with musical ideas and they rushed out in a torrent when he wrote and performed this song.

Based on Josh Dummer’s other published comments about the album, the lyrics reflect not only the terror he has experience and the personal demons he has faced, but also life-threatening situations confronted by other people close to him. Yet this song proclaims perseverance, triumph, and the joy of survival… or at least that’s how I hear it.

According to Dummer, the music on The Ichor Carcinoma was inspired by the likes of Opeth, Kreator, Old Man’s Child, Symphony X, and “tons of old Hair Metal!” The album will be released on September 29th.

Check out “Asphyxiation’s Lullaby” below, along with a play-through video for the album’s title track, which features Peter Wichers (ex-Soilwork) and Bob Katsionis (Firewind).