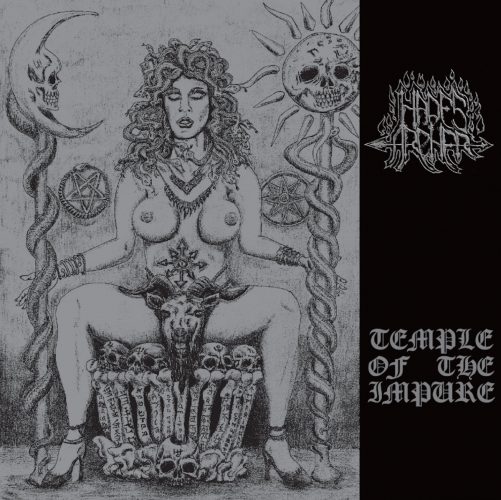 Fans of extreme metal and those of us who choose to write about it throw around words like “savage”, “ferocious”, and “bestial” as if they were beads at a Mardi Gras parade. Perhaps we throw them around so often and in so many directions that their currency becomes devalued. But in the case of Hades Archer, those words are really understatements. We need some kind of new terminology.

This Chilean band’s new album Temple of the Impure as been alliteratively described by agents of Hells Headbangers (who will release it in October) as “a fucking firestorm of filth and foulness, a forever-flowing fount of unnervingly hypnotic ultra violence”. That’s some good terminology, vivid and bullseye-accurate. But of course I’d like to try my own hand at describing the truly remarkable slaughtering impact of this music. In fact, I already have. 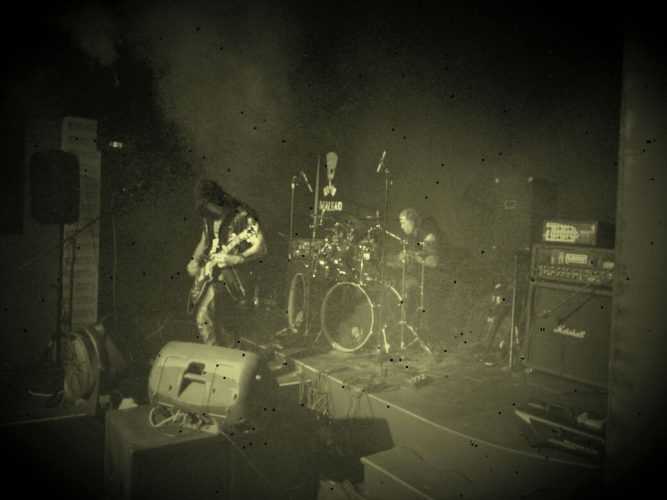 In mid-July Hells Headbangers revealed a track from the album called “Chaos Terratosis Chimeras”, which led me to describe it as “a violent hurricane of sound, a hurricane made of furiously abrading riffs, hyper-speed drumming, vicious growls, and frenzied arpeggios”. At about the 2:20 mark, the berserker fury ebbs briefly until (as I wrote) “a punishing pick slide announces a resumption of the slashing, the cutting, and the disembowelment.”

And now it’s our fiendish pleasure to present a second advance track, “Unus Cantus Bestiae“, which affords me a second chance to play with terminology. The pounding, plundering drum rhythms go faster than it seems humanly possible. The raking riffs and pulsating bass notes crackle with the terrifying electricity of unceasing lightning strikes. The sound is abrasive, yet also possessing a clarity that only sharpens its vein-opening impact. The voice is wretched and ravenous and hyped up on blood lust. The guitar leads and soloing are paradigms of superheated delirium.

Other songs on the album present dynamic changes of pace. This one doesn’t. It rips hell from one end to the other, affording no time to breathe. It infects the brain like a virus, too. Additional doses of this terror become necessary to sustain the high it provides.

In a word, the music is astonishing. And it’s even more astonishing when you realize that Hades Archer is a two-man strike force. They sound like 200 instead of two.

Temple of the Impure will be released by Hells Headbangers on October 13th, on CD, LP, and cassette tape. You’ll probably need asbestos mitts with which to remove the goods from the packaging.

Enjoy “Unus Cantus Bestiae” below, along with a stream of the previously released incinerator “Chaos Teratosis Chimeras“. And then order the damn album so that you may be consumed in hellfire!