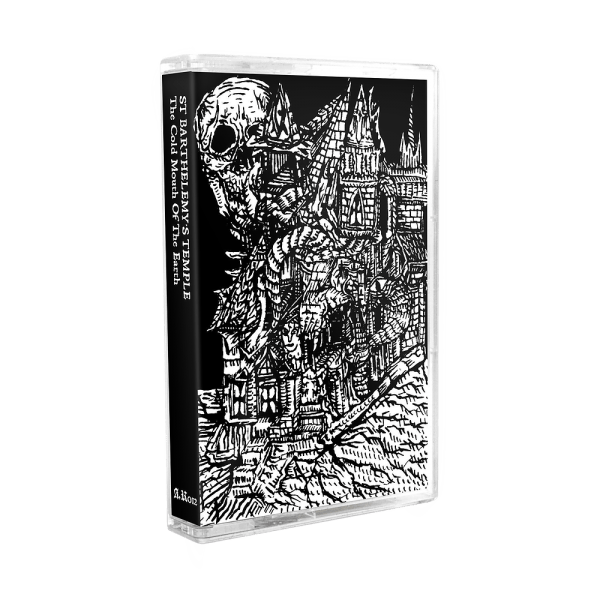 On the night of 23–24 August 1572 (the eve of the feast of Bartholomew the Apostle), the king of France ordered the killing of a group of French Protestants who had gathered in Paris to attend a royal wedding. The assassinations led to a wave of Catholic mob violence that spread throughout the city and into the countryside, resulting in the deaths of thousands.

The French extreme metal band Saint Barthelemy’s Temple have taken this paroxysm of violence and hatred as the inspiration for their name, and their new twenty-minute EP The Cold Mouth of the Earth will soon be released in October by Atavism Records. Today we bring you a full stream of its three powerful tracks — “De Potentia Saturni“, “To the Baneful Oblivion“, and “The Sword of the Victor“.

The music of The Cold Mouth of the Earth is indeed cold, cruel, immensely heavy, and equally incinerating.

The pacing of “De Potentia Saturni” is ponderous and lurching. Cataclysmically doomed and poisonously vibrating chords shake the earth while calamitous drum and bass blows smash and detonate like bombs. Against that backdrop of oppressive and destructive sound, stately but frightening melodies reverberate outward like giant funeral bells in a high tower, or moan in dismal agony, while seething riffs manifest a grim, boiling rage.

There is terror and death in the music, which was produced in a way that makes the sound overpowering (and it all echoes as if performed under the vault of a giant crypt), but most horrifying of all is the unrestrained fury and agony that comes through in the vocals. The intensity of the howling, roaring, and shrieking is itself overpowering — certainly distressing enough to raise goosebumps on the flesh.

Given the staggering weight of the opening track, it’s a bit of a shock when the band launch “To the Baneful Oblivion” in a blur of murderous tremolo riffing and skull-splitting drum artillery. While the opener leans heavily on the doom side of the band’s hybrid sound, this following track is at first a galloping, trampling, blasting scourge of black metal laced with an electrifying melody and more incinerating vocal derangement. It gets the listener’s blood (which had congealed by the end of the first track) rushing in a torrent.

But the other half of the hybrid sound eventually reveals itself as the pace slows and begins to heave and stomp, drawing down a curtain of suffocating doom braced by a powerfully head-moving and bone-splintering rhythm.

The final track begins in a massive, mid-paced lurching movement with a repeating melodic motif that clamps its grip on your head like a vice as that voice fries the neurons in your head. As it unfolds,”The Sword of the Victor” becomes even more infectious, slowly rocking out… until the music erupts in a fusillade of blasting drums and pealing guitar dissonance that eventually comes to seem like the very paroxysm of violence that spawned the band’s name.

This really is very, very good — a highly potent blending of black metal and doom that should not be missed.

The Cold Mouth of the Earth will be released next month by Atavism in a pro-tape format limited to 100 copies.