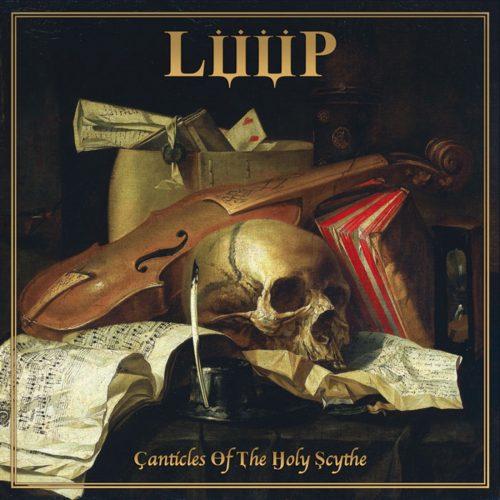 Here, we bring you a most unusual premiere from a most unusual new album, a multifaceted conceptual work of dark and ceremonial chamber music that intersects with certain aspects of black metal despite the use of acoustic instrumentation and the intimate and “conversational” nature of the chamber-music format.

The album is Canticles of the Holy Scythe by LÜÜP, which is the project of Greek composer and multi-instrumentalist Stelios Romaliadis. It will be released by I, Voidhanger Records on the 8th of December. It consists of six tracks that are described as “a concept about Death through occult philosophy; a journey of understanding and reconciliation with Death as a symbol of renewal through self awareness and enlightenment,” drawing upon folk traditions and superstitions as well as “the secrets of Alchemy and the Kabbalah, with Aleister Crowley’s magick and with ancient invocations of cosmic deities and astrological energies”.

And if that’s not enough to peak your interest, I’ll add these further descriptive words from I, Voidhanger’s introduction to the album:

“It combines the aesthetics of black metal, Balkan folk polyphonic singing, the harmonic and rhythmic power of Igor Stravinsky and Bela Bartok, the micro-polyphony and developing stillness of György Ligeti & Giacinto Scelsi, and the dark music of Univers Zero and Art Zoyd.”

The aesthetic connections with black metal are probably becoming apparent to you already, but I’ll add that the album also includes vocal contributions by Sakis Tolis (Rotting Christ) and Bjørn “Aldrahn” Dencker (Urarv, The Deathtrip, ex-Dødheimsgard).

The piece we bring you today appears as the second track on the album, with the mystical title of “9°=2° (Κόγξ ὀμ Πὰξ)”, whose Greek words can be re-formed as “Konx Om Pax” and may have been derived from the Egyptian phrase “Khabs Am Pecht” — a phrase that also appears in the lyrics — and which (according to Wikipedia) “means roughly ‘Light in extension’ or ‘Light rushing out in a single ray’, which is used in the Hermetic Order of the Golden Dawn’s Vernal and Autumnal Equinox ceremonies.” And in the Golden Dawn’s hierarchical structure, 9=2 identifies the Magus. Lyrically, the track is an invocation of the great serpent through the naming of the uncountable names by which the spirit of Mercury has been known.

Or at least that’s my best effort to understand the words — I make no claim to being an adept in the occult mysteries to which the lyrics refer. But one need not have a deep understanding of esoteric learning and rites to become enthralled by the sounds of the track.

This particular composition is performed by Fotis Siotas (viola), Fotini Kallianou (cello), Marios Kapilidis (bassoon), and composer Stelios Romaliadis (singing bowls), and it also features vocals by Sofia Sarri, whose recital of the words (both strident and then haunting) contrasts with the unsettling array of other voices heard in the piece — ominous growls, skin-shivering gasps, strangled cries, demonic snarls.

There is a kind of minimalist simplicity in the interplay of the instruments across the length of the track, but obvious thought and care went into the crafting of the music, because it has a mesmerizing yet unsettling effect. The deep moaning tones of the slowly bowed strings create a mood of gloom at the outset, but later the sounds become more frantic and fiery, and then more dreamlike and meditative. Sensations of sorrow emerge, as well as ominous threat and perhaps even ecstasy. And wholly apart from the immediate effect on the mind of these carefully plotted movements, the music lingers there as well, and further listening repays the time spent with further discoveries.

Canticles of the Holy Scythe was rcorded and mixed at Artracks Studios by Alex Bolpasis and was mastered by George Priniotakis. The cover painting is by N.L. Peschier, and credit for the art direction and design of the album goes to Francesco Gemelli.

The album will be released as a limited jewelcase CD in a cardboard slipcase with a 20-page booklet. For more info, keep an eye on the links below.