(This is TheMadIsraeli’s review of the new EP by Vitriol from Portland, Oregon, with a complete Bandcamp stream on the day of its release.)

Ted O’Neill of Oblivion tells me about this guy, Kyle Rasmussen, and his band Vitriol and says I should look into them, tells me he thinks they’re going to be a significant band to pay attention to. I get these recommendations all the time, and of course as a music journo or blogger of any sort your instant thought is to think someone’s just trying to signal-boost their friends. I still check those recommendations out, of course, because I’d be close-minded to take the cynical route. I hit up Kyle for his band’s debut EP and… it did not disappoint.

Vitriol hit a death metal note that’s not really been struck for a while now, that brand of out-of-control, rabid, and schizophrenic tech death some of us associate with the likes of Cryptopsy and Cephalic Carnage — structured delirium, organized chaos, encapsulated insanity. 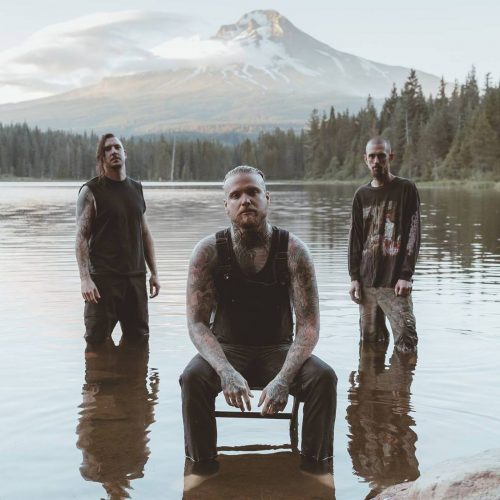 The rest of the band are stunning as well.  Adam Roethlisberger has a meaty, bestial bass tone that backs up Kyle’s grating, brittle, and fractured guitar tone, while drummer Scott Walker is like the black void love child of Immolation’s Steve Shalaty and Cryptopsy’s own Flo Mouriner.

Rasmussen’s riffing is no doubt the most impressive aspect, though, utilizing a combination of John Gallagher-esque brain-melting acrobatics, a sort of Nidingr-esque sense of chord progressions, and a very Behemoth-ian sense of pummeling death marches when the groovier parts kick in. It’s definitely hard to say no to what Vitriol is doing.

While I won’t tell you these guys are the next big thing, because to me the debut full-length is the test of that, this is one of the best death metal EP’s to be released in the last five or so years. If these guys can hold up this momentum on their debut LP, we’ll definitely be looking at a new prodigal son of tech death, assuming you enjoy being relentlessly beaten to death by sonic oppression this out of control.

4 Responses to “VITRIOL: “PAIN WILL DEFINE THEIR DEATH””