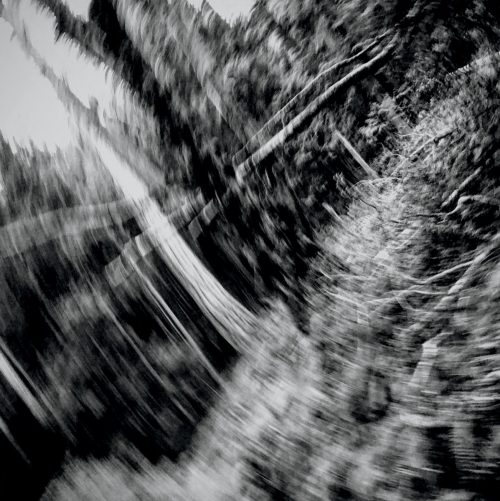 Even if you think you have nothing to be thankful for on Thanksgiving, you will on the day after that, because on that day Dark Descent will release the new EP by Thantifaxath, Void Masquerading As Matter. The odds are it’s like nothing you’ve ever heard, unless you’ve heard Sacred White Noise, and even then, this one pushes the envelope even further.

These songs are the children of Dionysus and Hermes, of Ares and Hades, of the Maniae and of Apollo. You could pick a different pantheon, but this is the one that sprang to my mind, because the music is orgiastic and ecstatic, mysterious and arcane, warlike and tortured, grand and funereal, and above all insanely creative — and simply insane. Thoughts of The Wild Hunt and George Gershwin sprang to mind, too.

It might be possible to parse these songs into their manifold musical ingredients, to map them in a blueprint, which no doubt would look labyrinthine, but I lack the musical knowledge and the word-smithing capability to do that adequately. And so, mainly, my thoughts are about the sensations of this sensational music. 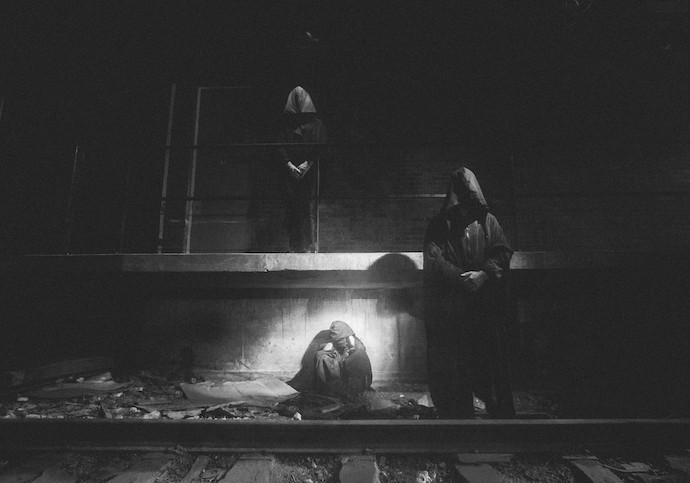 Before embarking on this trip (and what a trip it is), I revisited Sacred White Noise (reviewed by Austin Weber here), the 2014 debut album by this anonymous Toronto-based trio that put them on the metal map and marked that place with a warning: “Don’t turn your back on what comes from here!” I was struck, all over again, by what a remarkable record it is.

It is a true mind-bender — a twisted and shape-shifting form of black metal that’s powerfully frightening, elaborate in its complexity, disorienting in its tendency to make sudden sharp turns (and ascents and descents), freakishly berserk in its eruptions of mercurial note flurries, punishingly heavy and hostile, and weirdly hallucinogenic. Surprisingly, a sublime grandeur also throws back its hood to stand briefly revealed.

And yet despite how tangled, discomforting, and fundamentally surreal the music is (or perhaps because of all that), it really is intensely absorbing. No doubt, the album’s captivating quality is due in significant measure to the instrumental performances being so technically impressive, and the compositions being so fiendishly ingenious, but there’s some other black magic at work within the album that’s hard for a poor scribe like me to pin down. It shuts out the world and pulls the listener into a very different one. One where it might seem that everything wants to eat you.

All of which is to say that I had very high expectations for this new release, and in that respect I’m just one member of a rather large, globe-spanning crowd. Were the expectations unrealistically high?

Well, not if they were measured against “Self Devouring Worm“, the second track on the album, and the one that Dark Descent included in its summer sampler last July, which I thought was probably the high point of that excellent compilation. But now I’ve had the advantage of hearing the other three tracks as well, and astonishingly, this album-length EP exceeds expectations.

The new EP is recognizably the work of Thantifaxath. It includes many of the same qualities that made Sacred White Noise so distinctive. Anyone who is enamored of that record will be at least equally enthusiastic about this one — and maybe more so. It seems even more experimental, even more challenging, even more extravagantly creative, and the best evidence of all those impressions might be the EP’s final piece, which is the title track.

The whole EP flows, the songs running seamlessly into each other, and in retrospect, they all seem to be flowing in a tormented course toward “Void Masquerading As Matter“. The track is so surprising, and transfixing, that it almost achieves the impossible: It almost drives the mind-boggling impact of the preceding three tracks right out of your boggled mind.

No drums are to be heard on this closing piece of music; indeed, other than the slow bowing of a violin, it’s hard to pick out the sound of any instrument at all. It is instead the distorted sound of an angelic choir, the sound of soprano voices lifted in yearning, grief, and a kind of ecstasy mixed with pain. Shimmering electronic sounds rise and fall with those voices, which swell to a crescendo of shrieking and then subside, becoming wailing and ghostly.

It’s an unnerving and abrasive experience. It has an ectoplasmic quality. It seems funereal despite the boiling madness in the voices. I couldn’t get it out of my head, even though I kind of wanted to.

The three preceding tracks are just as arresting, though in ways more familiar to the experience of Sacred White Noise. They are often dense, discordant, and frenzied, sometimes heavy as hell and heartlessly destructive, sometimes gliding and spectral. The songs are meticulously constructed but filled to the brim with a big crowd of sounds. On a technical level, the instrumental performances are tremendous. The instruments you can pick out (and it’s not always easy to identify what those instruments are) rarely move at the same speed at the same time, and constant change is the order of the day. Surprises wait around every unexpected hairpin turn.

Maybe the most impressive achievement in these songs is that despite all their mind-warping twists and the bewildering array of sounds and moods packed into them,  Thantifaxath hold them together with greater and lesser threads of connection among all the maniacal moving parts, including catchy melodic motifs or rhythmic patterns that appear, disappear, and re-surface.

There are more tonal accents here than you could count, including a big array of guitar effects. To mention a few: somber piano notes and chords against a backing squall of abrasive noise in “Ocean of Screaming Spheres“; a frantic sound in the same song that resembles a clarinet or perhaps a soprano saxophone (though it’s probably a guitar); grand fanfares of explosive insanity in “Self Devouring Womb” that sound almost like the work of a brass section, along with a persistent high tone that could be an otherworldly siren going off; the moody and unstable violin and acoustic guitar harmony that ends the same song and pulls you into the next one, “Cursed Numbers“, which itself includes a demented piano arpeggio, something that might pass for the plucking and strumming of harp strings, and a crazed climbing and descending of scales by what might be the violin, or could be a guitar, or maybe the gibbering of a fractured mind.

Some of those tonalities I mentioned are part of the reason I thought of Gershwin, and Rhapsody In Blue in particular. I don’t know if anyone else would understand why I made that connection, but it comes from more than the use of the piano and the twisted accents of what could be the metal version of a jazz band.

Gershwin sought to capture the musical kaleidoscope of America, including its boisterous energy and its metropolitan madness. His signature composition has an experimental and improvisational quality; some of the parts might seem randomly tacked on; but melodic themes get stuck in the head. The whole affair is, in its way, wild and magnificent.

And so is Void Masquerading As Matter.

Look for a full stream next Monday, November 20; vinyl pre-orders will be available on November 17.

One Response to “THANTIFAXATH: “VOID MASQUERADING AS MATTER””