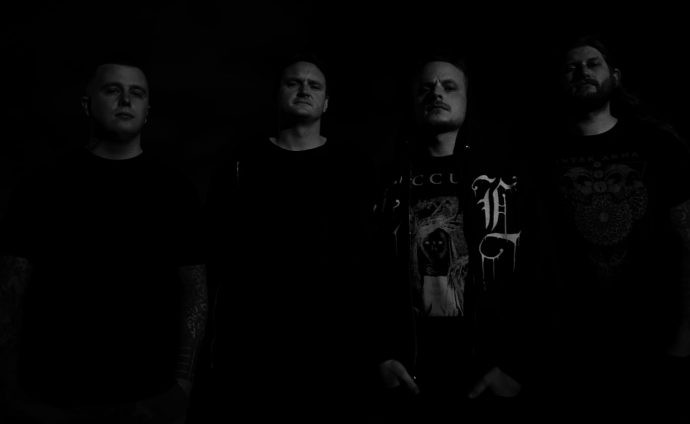 (Our New Zealand compatriot Craig Hayes (Six Noises) brings us this tremendously exciting premiere of a track from the forthcoming debut album of NZ’s Bridge Burner.)

You’d be hard-pressed to put your finger on where New Zealand four-piece Bridge Burner sit on the extreme metal spectrum nowadays –– and that’s no bad thing. Originality counts for a lot with today’s jam-packed roll call of noise-makers. And while Bridge Burner list groups like Botch, Godflesh, and death metal legends Bolt Thrower as influences, you’ll also find that grindcore, crust punk, and even dissonant black metal feature on the band’s latest full-throttle track, “The Blood Never Lies”, which is streaming below.

“The Blood Never Lies” is taken from Bridge Burner’s upcoming album, Null Apostle, which is due for release in 2018. In truth, it’s not that much of a surprise that the band display such energetic and multi-hued creativity on “The Blood Never Lies”. For a start, Bridge Burner’s members have also played in a raft of other notable bands, including Graves, Diocletian, Ulcerate, Punished, Witchrist, In Dread Response, and The Mark of Man.

That’s a lot of experience in the band’s ranks. And a lot of years spent toiling in the extreme metal underground. But Bridge Burner don’t sound weary at all. In fact, they sound fired-up and battle-ready, and they return with all guns blazing on “The Blood Never Lies”, utilising some of the heaviest and most annihilating armaments in their sonic arsenal. Vocalist Ben Read howls with all his cut-throat, cathartic might on “The Blood Never Lies”. And words like merciless, vitriolic, and fucking decimating spring to mind as the band tear through the barbaric track around him.

The first evidence of Bridge Burner’s brutal brilliance was found on their 7” debut, 2015’s Mantras of Self Loathing. That 4-track release married a mountain of intensity to equal amounts of belligerence, and it significantly raised the expectations for the band’s full-length debut.

No question, “The Blood Never Lies” meets those expectations, and then tramples them into dust. Guitarist Josh Hughes’ thickset riffs swarm and batter with hostile intent, while drummer Cam Sinclair delivers a bulldozing beatdown. The track highlights Bridge Burner’s ever-evolving songwriting. It’s meticulously constructed, balanced to precisely hit its target, and yet, simultaneously, it feels utterly unhinged, and vicious and visceral too.

As yet, no firm release date has been set for Null Apostle. But I’ve been lucky enough to hear the entire album, and trust me, Null Apostle is set to be one of next year’s most devastating releases. Check out “The Blood Never Lies” below, and No Clean Singing will be sure to keep you updated on Bridge Burner’s next obliterating step.