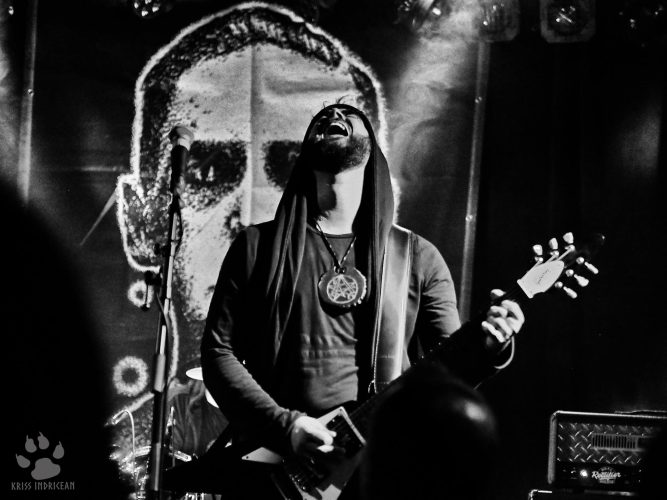 The Great Old Ones

(Greek metal writer and occasional NCS contributor John Sleepwalker attended the 5 Shades of Black show in Antwerp, Belgium, on October 21, 2017, and provides these thoughts about the performances by Saor, The Great Old Ones, Fen, Drawn Into Descent, and Sorrow Plagues. And we are most grateful to Kriss Wolf for kindly giving us permission to use her wonderful photos from the show, which appear throughout this review.)

5 Shades of Black stands as the type of an event that is a rare occasion in the lands of Greece. To the point that it seems more hopeful to dig for water in the desert than to expect names such as these to ever visit the capital city of Athens. Since the brand of old-school names is typically what tends to attract the majority of local interest, the few listeners dedicated to different aesthetics often need to travel to enjoy the related gigs of their choice.

Travelling turned out quite an option for the UK’s Sorrow Plagues, too, especially since Saor’s visit to Belgium marked their first live event outside the UK. Sorrow Plagues’ style was admittedly a bit too cheerful for my personal taste, since their post-rock melodies dominated over their black metal spectrum in places. However, it was the use of playback tracks that put quite an emphasis on the metalized aspect, standing as an ingredient that left a smile of satisfation on our faces. 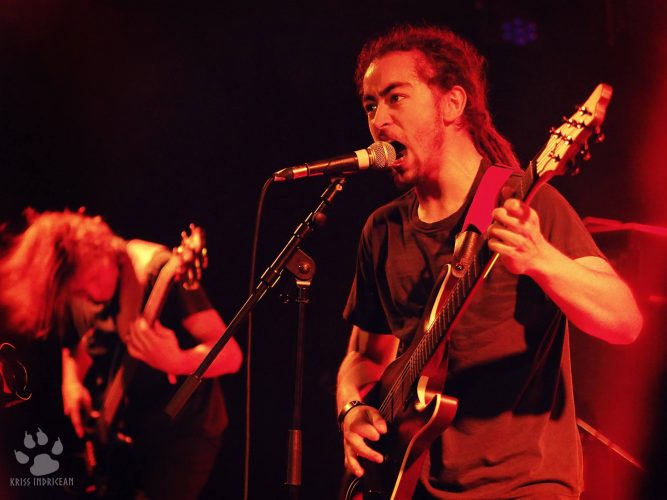 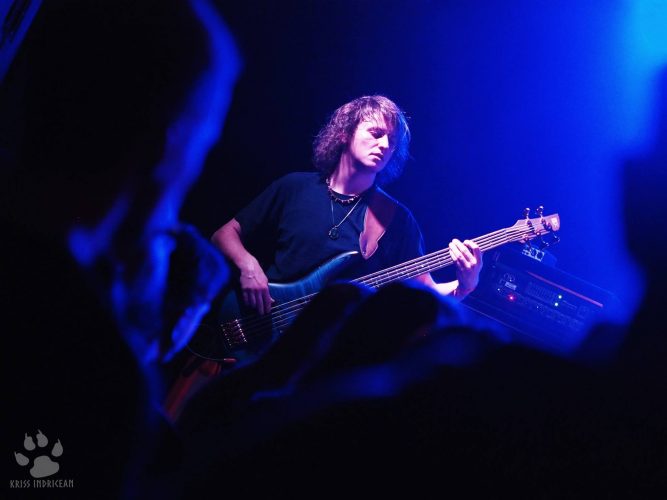 Drawn Into Descent are no strangers to the local Belgian scene, taking into consideration that they belong to the most promising names these lands can offer. In fact, they can easily claim they belong to the disappointingly small minority who have managed to draw influence from the frozen soundscapes of Agalloch, but also to properly integrate them into their own identity and sound.

In an ever-going quest for maturity, their methodical constructions seem to have variated their depressive black metal grounds by offering new dimensions to newer material, thanks to the focus on elusive outbursts during crucial parts of their set. As for the older songs, they received only the highest of praise from the audience, indicating their inceasing popularity among the local scene. 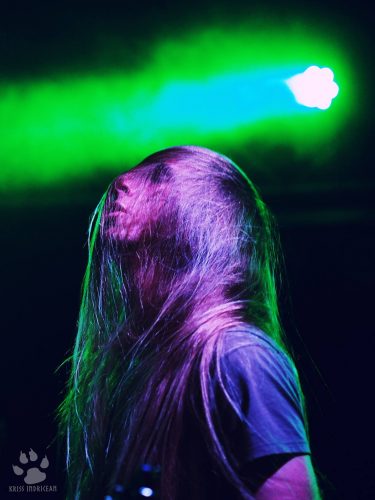 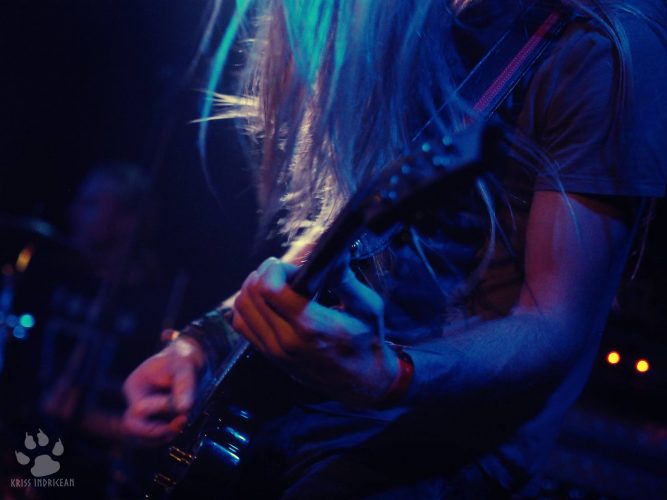 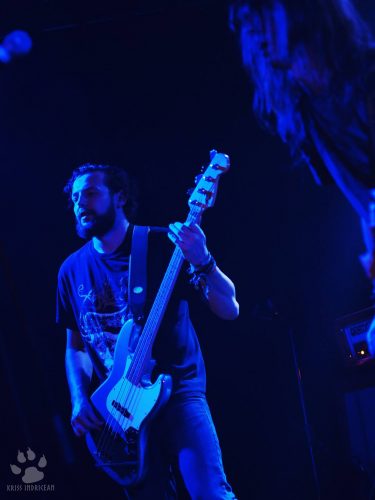 Fen belong to the brand of bands I haven’t followed in years; not after the brilliance of their Ancient Sorrow EP and the fairly good follow-up The Malediction Fields. I realize I probably sound like an old goat who claims most bands he likes either broke up or now suck, but taking into account the number of interesting releases coming out nowadays, it’s remarkably easy to lose track of a band that made a positive impression on you.

Thus, eight years later, Fen’s presence impressed me in the same sense every working band of their kind would — by sounding steadily solid, without wasting time, but preferring to focus instead on the live energy of their material. I often say a three-piece act may sometimes exhale an aura stronger compared to an entire swarm, and Fen’s performance was proof of that. 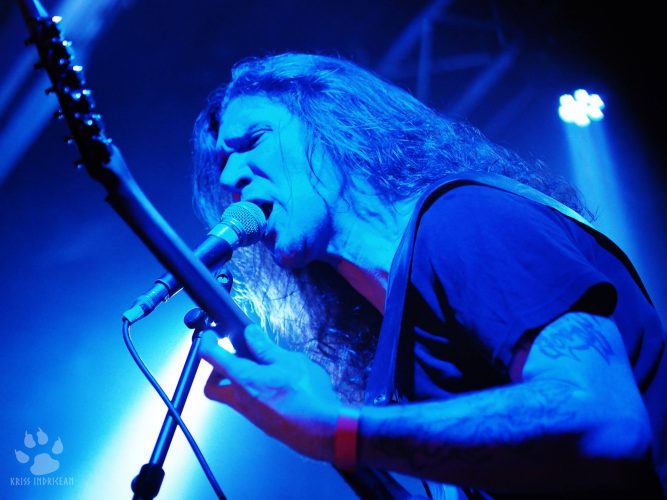 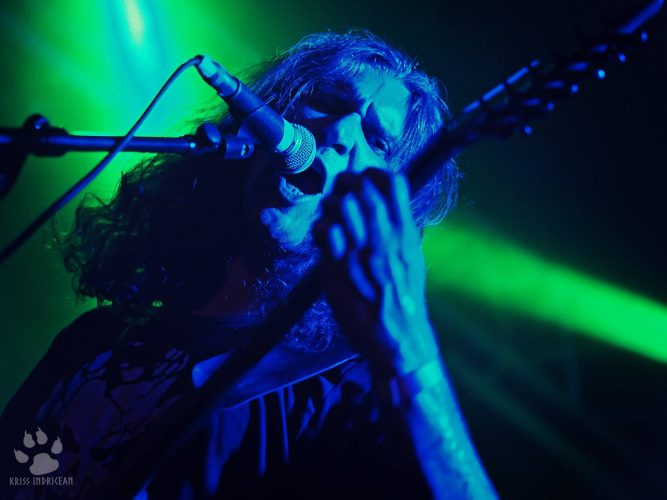 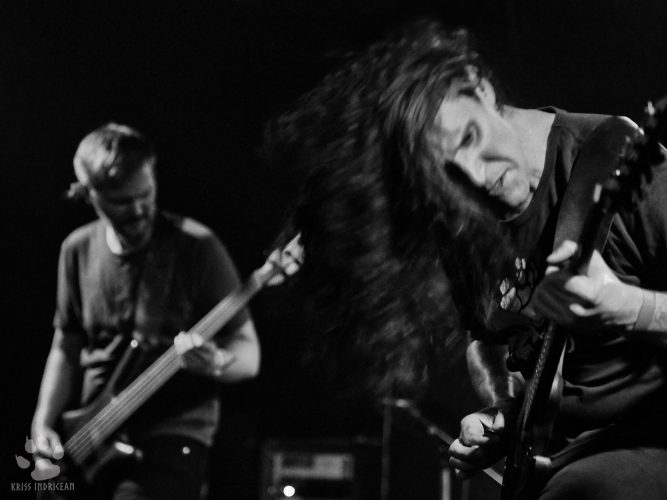 The Great Old Ones, likewise, reflected what every serious headliner ought to bring to the table on live occasions. Their triple six-sting assaults were steadily rising tidal momentums, one after the other, as their massive sound was attacking all human senses in a sense gleamingly wider compared to their studio sound. After all, every member seemed to be well aware of the instrument assigned to him, as well as how these enthrallingly massive waves are to be so thoroughly constructed, as if their gradual work was to assemble bits and pieces of a redeeming flashback, whose recurring memories have been corrosively aged by a photographic filter.

Make no mistake though, The Great Old Ones also demonstrated how a consice approach may tighten the bonds of a group that is so complete in every aspect. Despite how the preceeding names in this review put on the greatest of efforts, the French appeared silent, yet more settled on constructing the foundations of the ideal sonic wall. Without any interactions towards the audience, no expesssive posing, or any fucking drama in spoken words in between the songs, The Great Old Ones stood proud as five Archaic figures, reminiscent of the ones carved in ancient, forgotten scrolls. As if they were there to remind us how unearthly spells can stain your mind for centuries and generations to come. 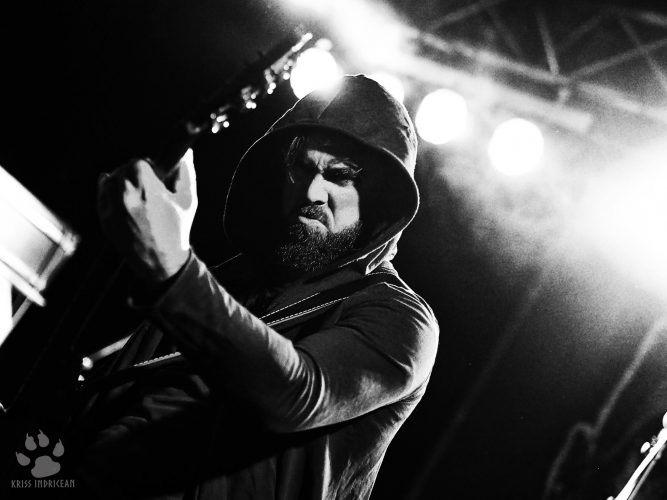 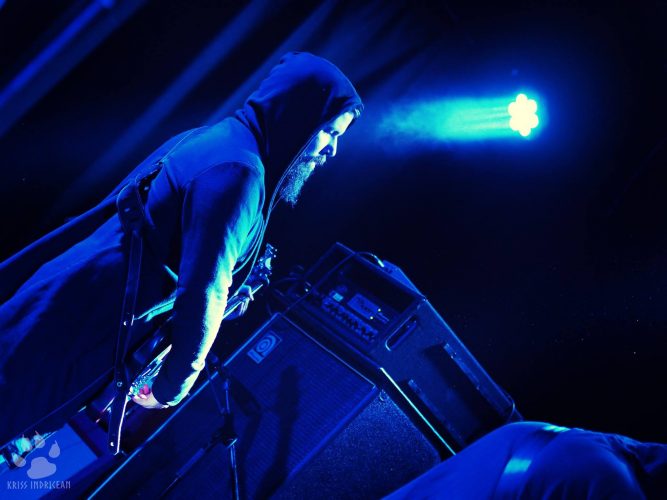 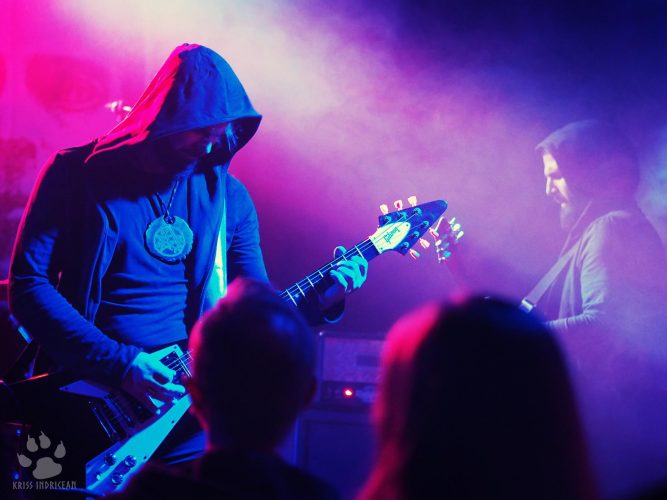 It was getting late already when Saor appeared on stage, given the hard task of keeping the interest going among the ranks of an audience thinned by those seemingly too tired to attend. I do not consider irrational how many attendants left the show early, as I did skip a part of Saor’s set myself in order to gather my strengths and enjoy as much of it as possible.

But Saor seemed also well aware of the hardships assigned to them and put out revitilizing currents of energy, reminiscent of what a pure rock ‘n’ roll band brings on stage. The epic Scottish-infused playbacks were exaling the desired aura, but the band itself seemed pretty stark in their approach, dressed with simple black shirts in order to rock out their most structural highlights.

If you ask me, Saor were indeed the co-headliner of the night, as they pulled off the hardest of calls. And the people interacted with the members and contributed their last remaining drops of energy in creating what you’d call a pure arena rock feeling. I mean, when seeing the band putting everything they had on stage, I had this flashback of that movie with Mel Gibson, you know, the one that is called BraveHeart. A film whose values speak to the working class and those overcoming difficulties, aside from the historical aspects of fighting barehand for the freedom of your land. 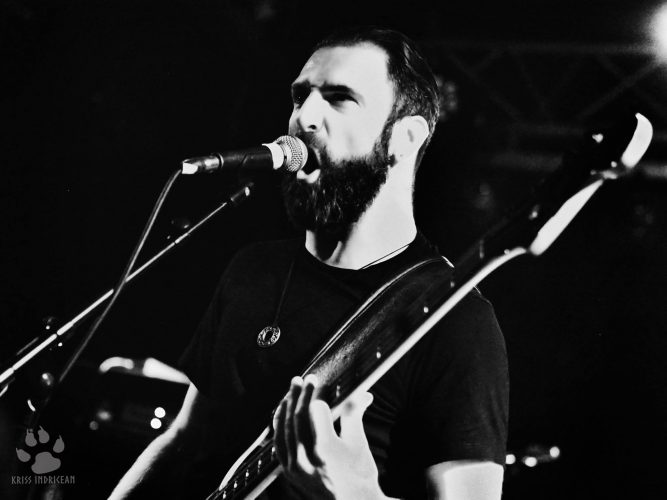 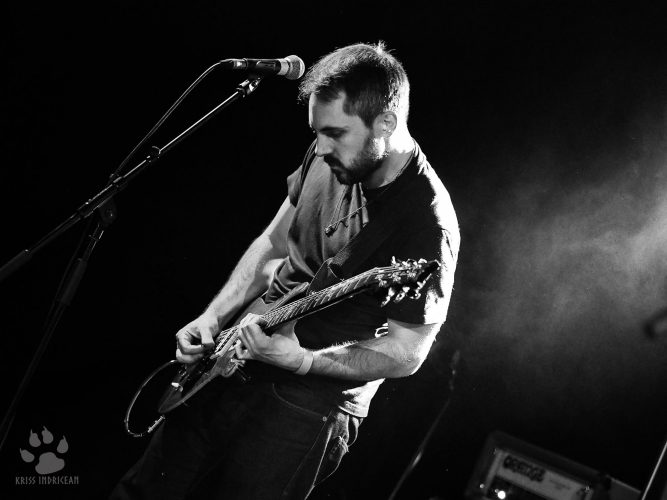 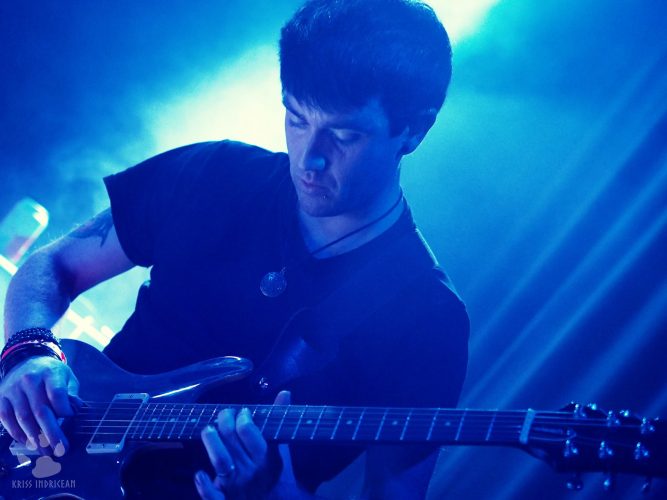 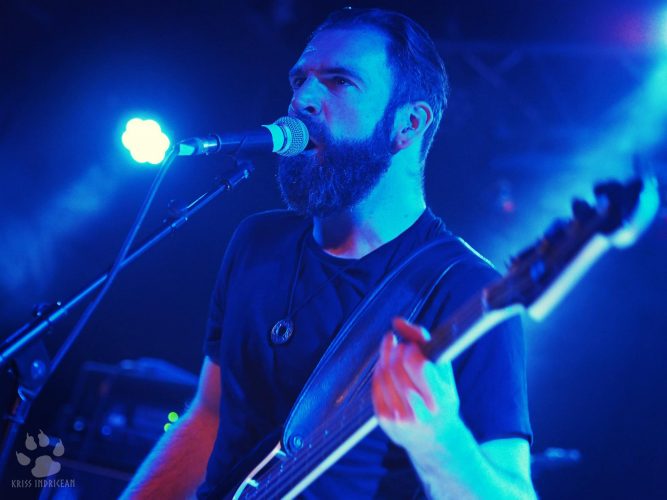 So anyway, all in all, 5 Shades of Black turned out to be one of the most successful events I have attended lately, in every possible regard. Starting from the line-up and the sound, to the promoter’s accuracy on the schedule, as well as to the merchandise offered to the fans. It does remain a question, of course, whether potential video projections of Scottish landscapes, or battles forgotten to man, would intensify Saor’s performance. But I think some things are best left in fantasy, especially since their live setting worked so perfectly as a whole.