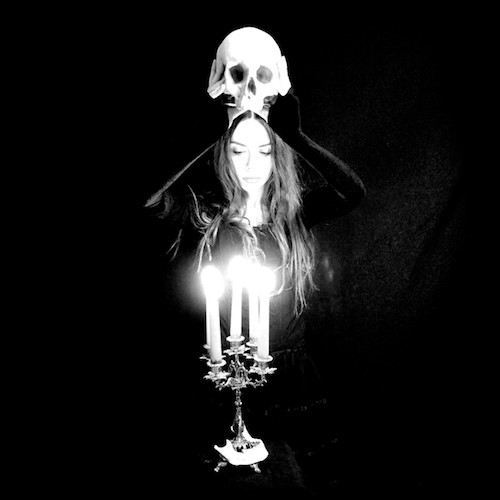 Today, Iron Bonehead Productions is releasing the debut album of the Ukrainian one-woman black metal band Ieschure, the creation of Lilita Arndt from Rivne, which is fittingly named The Shadow. We’re helping spread the word through a full stream of the album in this post.

As I listened to the album for the first time, I had a place in my notes where I just jotted words that came to mind, unbidden — words intended to express the atmosphere and emotional sensations conveyed by the music and the voices. And those were: haunting, preternatural, nocturnal, cold, depressive, sinister, hallucinatory, hypnotic, beautiful, and… perhaps most to the point… hopeless. 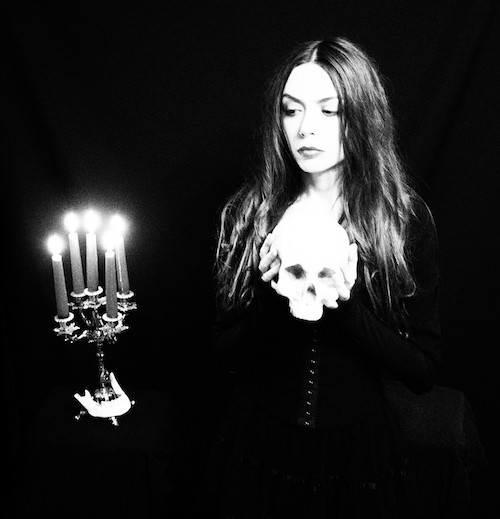 In one sense, the music is an unabashed homage to the particularly grim, frigid, and supernatural forms of black metal that sprang to life in the early ’90s, but it is spliced with other intriguing accents that give the songs changing shapes… albeit without ever allowing warmth or joy to rear their banished heads.

True to the music’s deep roots, the album has an intentionally lo-fi production quality, the guitars cloaked in a scratchy shroud of distortion or an ethereal shine of reverberation, the drums hitting in a muffled whump, the voices sounding as if they were recorded in an echoing crypt.

The album is book-ended by two largely instrumental pieces that, while not black metal, do successfully complement the utter bleakness of the songs that come between them. The introductory track, “Shadows From the Great Beyond”, is a slow, sorrowful, eerie, reverberating acoustic guitar melody backed by shimmering keyboards and tones that sound like a cross between the peal of a horn and the chiming of a bell, while the outro piece, “Through the Chaos of Voices”, is a classical composition performed by beautiful, grieving violins over the deep moan of a bass. There are vocals in this finishing piece — a plaintive clean voice on the brink of desolation, rising in a song of sorrow.

Clean vocals appear elsewhere in the album. They sound like the somber emanations of a poltergeist in “Eternal Wheels of Life” (which includes a grief-stricken guitar melody that drifts like smoke into a misting night sky), like the sound of agony in the frenzied and unsettling “Mystic Schizophrenia”, like the wailing of a witch in “What Waits In the End”, which includes sad, folk-like melodic accents against the scratch and scrape of harsh chords. The voice has a somber, gothic resonance in “Before the New Dawn Comes” (which moves with a persistent rocking beat), and soars with a beautiful purity in “Condemned To Death” (which helps make that song one of the album’s highlights).

But as you’ll discover early in the album, these clean vocal expressions share at least equal time with abrasive ugliness. This is black metal after all, and so Ms. Arndt proves herself capable of emitting excruciating snarls and shrieks, expressing torture or rage or both, in a truly harrowing manner.

The album turns out to be an intriguing trip, but a very dark one through shadow realms of sorcery and death. 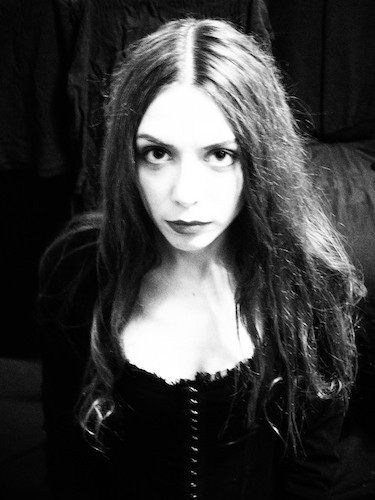 The Shadow is out now via Iron Bonehead, available today on CD and digitally, with an LP version to be released a bit later.

10 Responses to “AN NCS ALBUM PREMIERE (AND A REVIEW): IESCURE — “THE SHADOW””