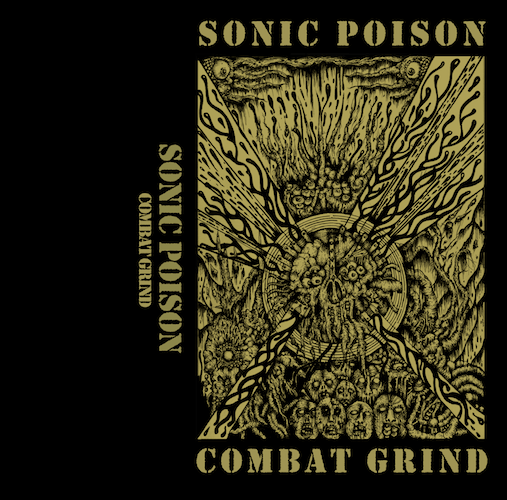 It’s fair to say that Caligari Records has had a banner fucking year in 2017, releasing extremely well-received albums and EPs by such bands as Rope Sect, Boia, Devoid of Thought, Ziggurat, Shaman Ritual, Uttertomb, Funeralium, and Amnutseba (among others). But the year isn’t (quite) over yet, and Caligari has one more release for us, one that will help bring the year to an end in a pile of smoking rubble. And that one last release is the second EP by the Finnish grinders Sonic Poison, which it’s our pleasure to premiere on its release date — which is today!

Entitled Combat Grind, this is Sonic Poison’s second release, following their 2016 debut (also released by Caligari), Harsh Demonstration…, and it reveals the work of a band who have surged ahead to new heights of mauling destructiveness. 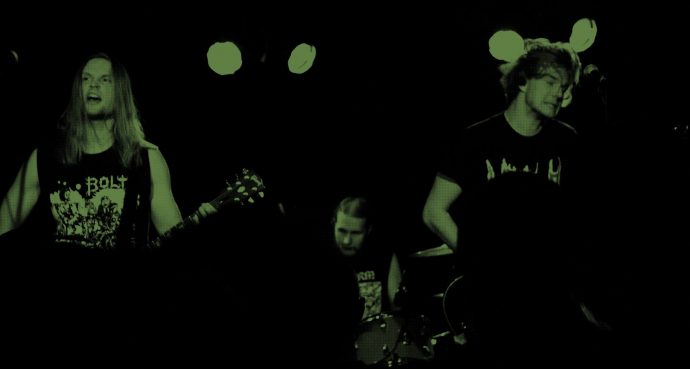 In a nutshell, Combat Grind is a savage, fleet-footed adrenaline beast. Over the course of six compact tracks and slightly less than 10 minutes of running time, the EP makes an explosive impact. The music has a raw, corrosive, filthy sound, which is matched by the raw, bestial, straight-for-the-throat, bullet-spitting vocal insanity. The songs dependably erupt in bursts of pure, crazed violence — with maniacal drumming that sounds like the thundering hooves of a stampede or the battering of a thousand fists, viciously swarming riffs, and freakish, face-searing solos.

And all of that would be just fucking fine, but that’s only part of what makes Combat Grind such a diabolical pleasure. As you’ll discover very quickly, Sonic Poison punch up all these tracks with some damned infectious, highly headbangable, punk-infused riffs, and variations in the drumwork that bring in rumbling, rocking, and d-beat scampering. Hooks as well as holocaust — what more could you want?

Combat Grind will be released on cassette tape by Caligari today (December 21st) Pre-order via the link below.