The first song in this collection is also the one I heard most recently, thanks to a link yesterday from my astute acquaintance Miloš. But it demanded to be placed here, because it shot a lightning bolt straight through me on the first listen. 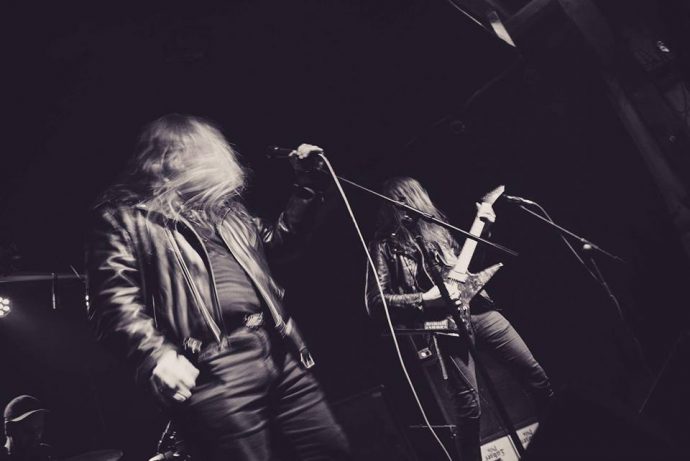 This is “Kultyst“, one of seven tracks on Maltrér, the new album by the German black metal band Verheerer. I’m not surprised that it affected me so strongly — I was similarly affected by Verheerer’s debut EP, Archar (and said so here).

“Kultyst” is ravaging in its intensity — the vocals are especially unhinged, and the drumwork is equally striking — and the song’s soaring melodic currents are glorious and grand, while the less warlike passages are brooding and grim. The track thus has both an anthemic quality and a funereal darkness. In both respects, it’s piercingly dramatic and quite memorable. I can tell already that “Kultyst” will stay with me a long time.

Maltrér will be released by Vendetta Records on January 19th and can be ordered from the label or the band via Bandcamp. 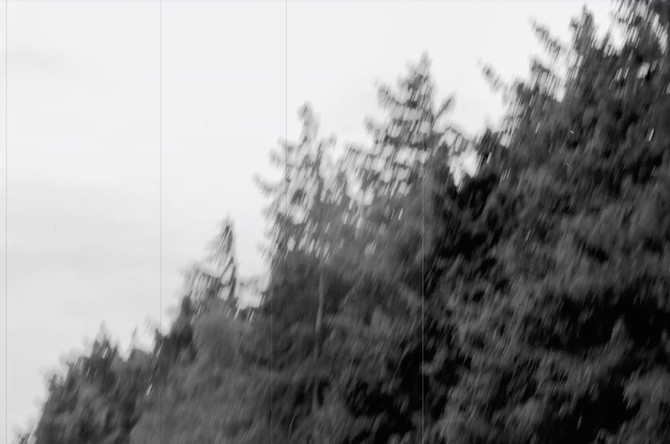 I owe thanks to NCS follower and frequent commenter brklyner for this next discovery. The first thing that gripped me about the song was that voice… that wild voice! The second thing was the change in drum rhythm and the chord progression that happened at the 0:32 mark. And the grip only tightened from there.

This is “op het scherpst van de snede“, a track by the Dutch band Afvallige (a name that seems to mean “renegade” or “apostate” in English), which is the solo project of Nortfalke, who is a member of numerous black metal bands, including Tarnkappe, Kaeck, Kjeld, and Standvast.

The song is a full-throttle mixture of fire and ice, the riffing cold and bleak but also as fierce and as untamed as a bonfire. It will also get stuck in your head… and that voice, holy hell is it fantastic!!!!

Despite some internet searching, I’ve found no information about when or whether Afvallige will have a release that includes this song, nor have I found any Afvallige social media presence. 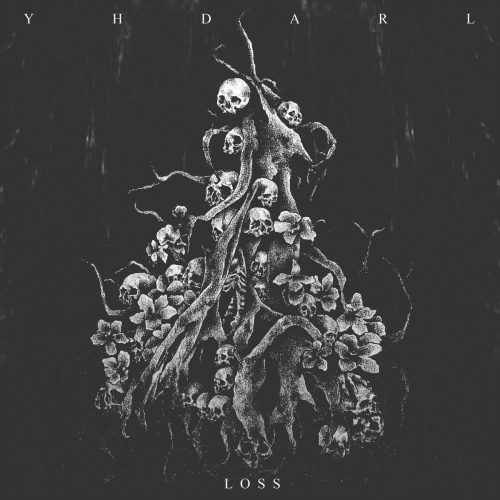 Despite the existence of an enormous discography, I was unfamiliar with the music of Yhdarl until becoming transfixed by the next song in today’s collection.

The band consists of Belgian musician and vocalist Déhà (whose work in such other bands as Maladie, Slow, Clouds, and Imber Luminis I do know) and French vocalist/keyboardist Larvalis. The song that transfixed me is one of three long tracks on the latest Yhdarl album, Loss, which will be released by I, Voidhanger Records on January 19 and features cover art by Maxime Taccardi.

I should add before commenting on the song that the album includes guest appearances by Old (Drohtnung) on ritual noises, choirs and voices; Daniel Neagoe (Eye Of Solitude, Clouds), Todor Krasimirov, and Yavor Dimov (both from Dimholt).

And yes, I’m not exaggerating when I say that “Ignite – Ashes” is transfixing — throughout its nearly 16-minute length. That significant achievement, that success in pinning the listener in place like a butterfly in a display, is due in no small measure to the stunning impact of the varied voices in the recording, which are never less than soul-shattering in their intensity.

The ominous, sweeping grandeur of the music in its slower and more agonized movements, coupled with the bracing adrenaline surge provoked by its more violent and rocketing flurries of sound, are also keys to Yhdarl’s success in keeping an iron grip on the listener’s attention, as is the well-placed digression that comes in the song’s second half, which is hallucinatory and haunting.

In short, this is a wrenching symphony of terror and pain that cannot be denied. 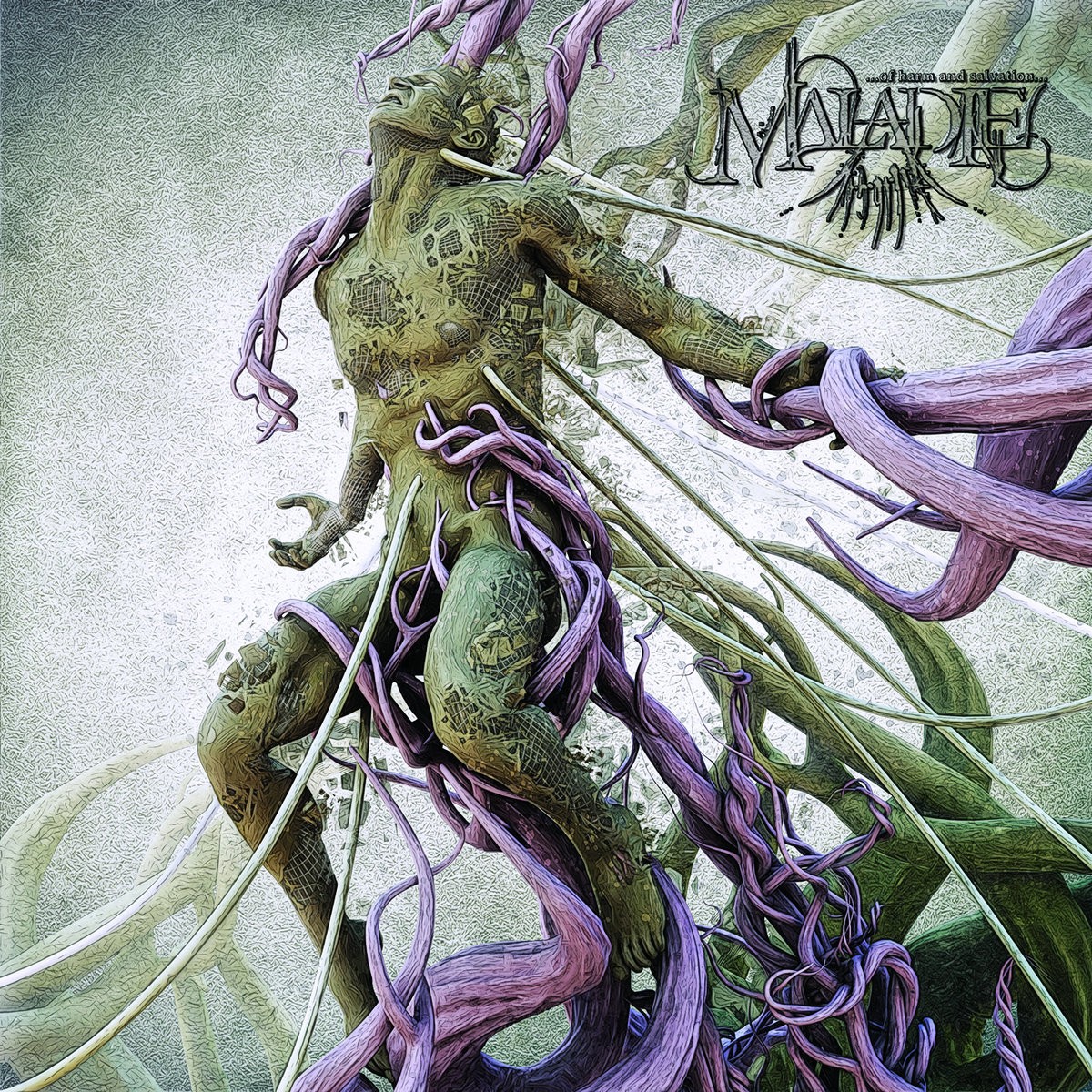 It made sense to follow Yhdarl with Maladie, since both bands include participation by the Belgian artist Déhà, although the ranks of Maladie are much deeper — their Facebook page lists a total of eight members. This small army of mainly German musicians released two albums and an EP from 2012 through 2016, the first two of which were reviewed for us by Austin Weber, and the fourth one — …Of Harm and Salvation — is now set for arrival via Apostasy Records on February 23rd. The wonderful cover art is by Remy of Headsplit Design.

Two singles have emerged so far, and the second one — “Oblivio” — was revealed last week. It is a kind of macabre but mesmerizing musical carnival, full of melodic and rhythmic twists and turns and shifts in mood, as well as changing vocals (harsh and clean, crazy and solemn, expressing the lyrics in a multitude of languages). And fans of the band will be glad to know that the saxophone is still a part of the band’s kaleidoscopic sound.

As unpredictable and multi-faceted as the song is, more than a few parts (and especially the clean-sung melodic segment) prove capable of sticking themselves in the memory.

Enjoy “Oblivio” below, along with the stream of the new album’s first single, “Profunditas“.

I was attracted to this next song because the band, whose name is Krukh, includes Markov Soroka (Tchornobog, Aureole, Slow) on guitars, bass, and vocals, and drummer Shawn Eldridge (Death Fortress, Abysmal Gates, Ruinous, ex-Disma), in addition to lead guitarist N. Salimbayev.

The name of the song is “БЕЗГЛУЗДІСТЬ“, and it’s the title track to a debut album that will be released by Fallen Empire Records this coming spring. And if the line-up hadn’t been intriguing enough, the cover art by Karmazid would have compelled me to listen all by itself.

The music here pays homage to the old, cold ways of second-wave black metal, but as I said of an earlier piece of music in this collection, it blends fire with ice, and proves to be more multifaceted than you might guess from the opening minutes.

As expected, the drumming is a huge highlight, but only one of many. The extravagant madness of the changing vocals, the infectiousness of the (tremendously grim) riffs, and the spectral quality of the lead-guitar and keyboard accents are three more. Put this album on your radar screens; it’s definitely now on mine. 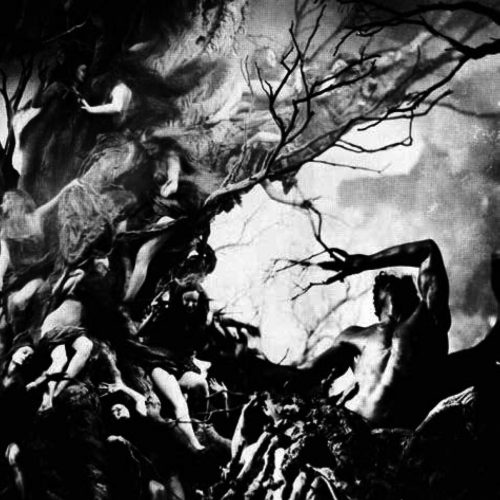 I conclude this week’s edition of SHADES OF BLACK with a stream of Abigor’s new album, Höllenzwang (Chronicles of Perdition), which will be released by Avantgarde Music on CD and LP. There should not be a full official music stream available now, in advance of the physical release, merely the two excerpts of music that Abigor chose to reveal in November and on January 1. However, some self-entitled assholes decided to distribute pirate files of the album, which prompted Avantgarde Music to make the album available through an official digital download at Bandcamp on January 3.

I’ll quote here the words of Abigor from their Facebook page — sentiments that should not have to be repeated, but sadly must be:

“We hail those who value Black Metal as art, who actually respect and pay for the achievement of a year full of blood, sweat and also money, which it needs to come up with a work like this. Some kids out there mistake a Black Metal album for a valueless abstract common good, but our full respect goes out to those who understand what it means to write such music and lyrics, to record, mix and master it, to work on the visual realisation and finally to prepare the release.”

The album has already been the subject of acclaim at our site, including through its prominent position here on the year-end list of Semjaza (Thy Darkened Shade, Acrimonious) — whose list was a selection of the albums he listened to the most in 2016, and of course he had permitted access to Höllenzwang in advance of its official release (having recorded some vocal lines for the album).

As Semjaza wrote, the album can be summarized as “a vortex of death and destruction”. It is dense, intricate, unpredictable, unsettling, and almost constantly an assault on the senses, the kind of experience that seems bent on forcibly deconstructing the listener’s mind and then re-braiding the strands into new forms. No doubt it will repel some, and prove to be intensely fascinating for others (and I’m in the latter camp).