(Andy Synn presents our first Rearview Mirror post in many moons. For those who may have forgotten, the column is a rare instance in which we look at metal’s past rather than its present and future.)

Even though we’ve been running these “Rearview Mirror” columns for quite a while now it appears that this is only my third contribution to the series.

Whether that’s simply because I’ve been too busy, or because I like to have a rest on the seventh day (make of that what you will…), the fact remains that this particular corner of NCS has largely been left to Islander (and occasionally DGR) to run.

But today it’s my turn behind the wheel, and I’ve decided to take this opportunity to highlight one of the most overlooked albums in the discography of the legendary Testament!

The mid-late ’90s were an odd period for these Oakland raiders, which saw the band dealing with internal tensions, a fluctuating roster, and a big shift in style, all of which only served to alienate many fans of the band’s “classic” sound/line-up.

There are those, however, myself included, who feel that the group’s decision to pursue a much heavier, much darker, and much more aggressive path (following the more user-friendly approach of The Ritual) was the right one, allowing them a greater amount of creative freedom and liberating them from the pressures and demands of the mainstream Metal scene at the time.

The three albums which germinated from this period – Low, Demonic, and The Gathering – still stand as some of my favourite Testament albums of all time, and although The Gathering would certainly seem like the natural and easy choice for today’s column (as it remains, in my opinion, their best album), instead I’ve opted for the black sheep of the band’s back-catalogue… Demonic. 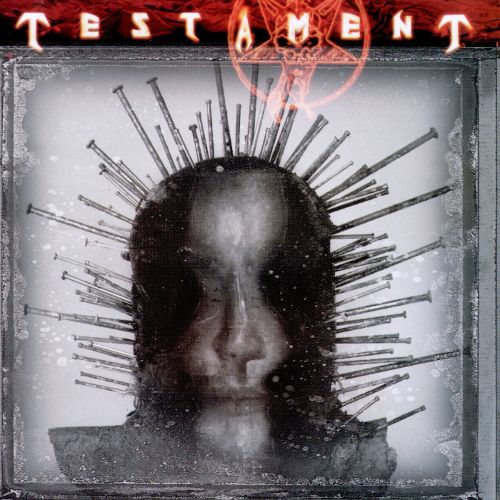 Featuring the mighty Gene Hoglan on drums, and a returning Derrick Ramirez on bass, it’s not really a stretch to say that Demonic is the closest thing that Testament have ever produced to a “pure” Death Metal album.

Eric Peterson’s riffs are just that little bit nastier, that little bit harsher, Chuck Billy’s vocals are nastier and far more guttural than usual, and Hoglan’s drumming is as dense and as violent as a sack of anvils tumbling down a fire-escape, meaning that songs like chug-tastic opening pair “Demonic Refusal” and “The Burning Times”, the devastating “Distorted Lives”, and the absolutely crushing “Ten Thousand Thrones”, stand out easily as some of the heaviest material the band have ever recorded.

Of course they haven’t completely abandoned their roots, and tracks like “Together As One”, “John Doe”, and “Hatred’s Rise” still have a certain malign thrashiness to them, but even here it should be obvious that the hooks on display are a little more jagged, the melodies a little bit more menacing, and the album as a whole just several shades darker than what you might be used to from the band.

That being said, for all its divisive nature among the group’s fanbase at the time, it still remains an important milestone in their career, and one of their most unfairly underrated releases.

3 Responses to “THE REARVIEW MIRROR: TESTAMENT”