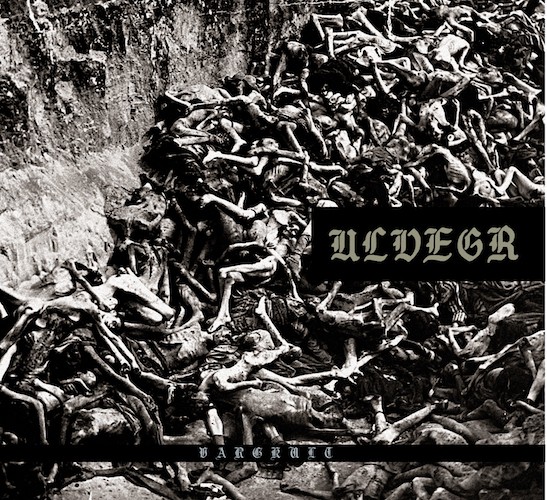 Today we present the full streaming premiere of Vargkult, the fifth album by the Ukrainian band Ulvegr, in advance of its January 30 release by Ashen Dominion. It follows quickly on the heels of 2017’s Titahion: Kaos Manifest, which we also premiered last April. But this album is a different beast from the last one, a relentless, incinerating assault that never pauses to take prisoners.

For those who may be newcomers to Ulvegr, the band’s two steadfast members are Helg (songwriting, vocals, guitar, bass) and Odalv (drums). Both of them are members of Kzohh, Ygg, and Runes of Dianceht, and Helg is also a member of Khors, while Odalv has also contributed his talents to Twilightfall and Elderblood. 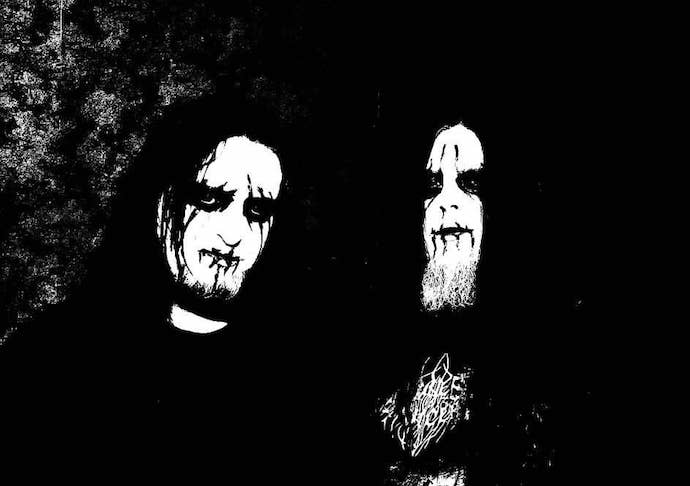 Titahion: Kaos Manifest was a multifaceted and dynamic interweaving of dramatic (and even delirious) intensity with an atmosphere of occult, ritualistic ceremony. It includes interludes composed of penetrating tribal drum rhythms, cosmic ambience, deep droning tones suggestive of the void, and mad vocal cacophonies. Even the more surging and sweepingly intense tracks reveal different dimensions, incorporating deep, heaving riffs and slow, ominous, doomed marches; incandescent guitar leads and passages of titanic heaviness; striking, melancholy melodies and moments of ominous infernal grandeur. A straight run through the album is a gripping and fascinating experience because of the ways in which the moods and energies of the music change.

Vargkult, on the other hand, is a non-stop sonic firestorm from beginning to end. On this album, Ulvegr are completely committed to the transmission of blood-rushing fire and fury. Each track is built around lethal riffs, penetrating leads, compulsive drum rhythms, rapid-fire bass pulses, and extravagantly hate-filled, savagely scalding vocals. They keep the speed in the red zone, with no pause for re-fueling or deep breaths.

Without dynamism in the pacing or stylistic nuances in the mix, the album’s success depends on other qualities — mainly the sharpness of the melodic hooks and the music’s fierce, adrenaline-triggering energy. There are usually pairs of alternating riffs in each song, one higher in range, one lower, one that sets the hook and the other that twists it and digs it in, ’til the blood starts pumping from the wound like water from a pressurized firehose. The drumwork, which is powerfully propulsive, tends to switch between furious blasting and head-snapping snare rhythms combined with bursts of double-bass artillery.

There are subtle changes in the mood of the songs. The skirling leads in the opening and closing tracks have a whirling, dervish-like quality, like delirious, exultant dances. The vibrating riffs in “The End Is Near” are more redolent of glowering gloom, mixed with carnivorous chaos. The chords in “Cold Graves Breathing Beast” resemble massed war horns trumpeting a barbarous cavalry assault, and the frenzied lead exudes a feeling of violent lunacy.

“Death Is Our Law” delivers a turbocharged dose of wild riffing that boils in a murderous fury, while “Cutting Off Your Throat” is bleak and beleaguered in its feeling, despite the delirium of the delivery, while “All the Sleep To the Slaughter” combines a grim and seething sensation with intense writhings of pure flame.

About half the tracks are in the four-to-five-minute range; the others are even shorter. With the music coming in such a breathless rush, the minutes pass before you know it. So does the entire album. Vargkult may not be as ambitious, as multifaceted, or as atmospheric as Ulvegr’s last album, but it’s such a viciously thrilling ride that it still succeeds. Sometimes, racing with the wolves is just what you want, and for those times Vargkult admirably puts you right in the middle of the pack.

2 Responses to “AN NCS PREMIERE (AND A REVIEW): ULVEGR — “VARGKULT””