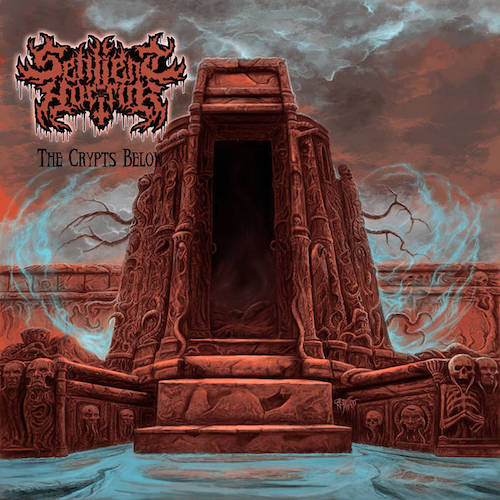 The cover art of the great Juanjo Castellano heralds the return of Sentient Horror from the crypts below, where they have been at work creating a ghoulish new five-track EP named… The Crypts Below. The vault will be opened wide on March 30, when the EP will be released through the conspiracy of Redefining Darkness Records (North America) and Testimony Records (Europe), but something abominable is escaping into our world today… a new song named “Bled Dry By the Night“.

Those of you who are familiar with this death metal band’s 2016 debut album, Ungodly Forms, will have a good idea what to expect, but may still not be fully prepared for the new terrors on this EP, which includes a cover of Edge of Sanity’s “Darkday” (from 1993’s The Spectral Sorrows) and four new original songs. As guitarist/vocalist Matt Moliti explains: 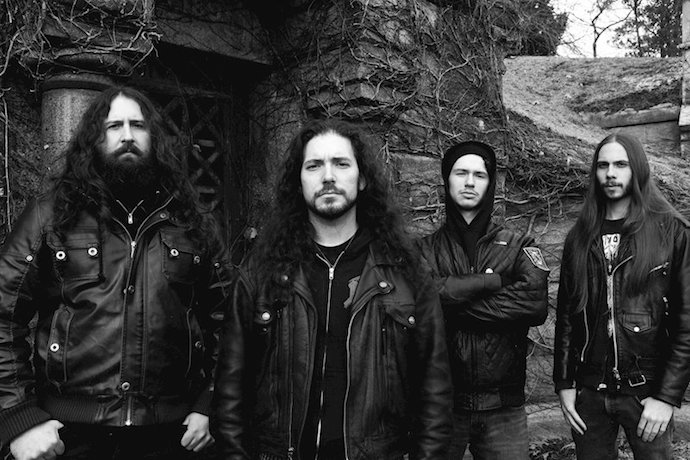 “The idea for this EP was to go for the throat and never let up. The songs came out fast, brutal, and a little more complex than the material on Ungodly Forms. No leftovers or B sides here… these tunes are solid from front to back, and I believe this will serve as a an excellent bridge point between our debut and whatever we wind up doing on the 2nd full length. Covering “Darkday” was a blast. We’ve played it live a few times, and since Edge of Sanity is one of our biggest influences, it was an obvious choice for a cover.”

These aren’t exaggerations, as you’ll find out very quickly by listening to “Bled Dry By the Night“. The stringed instruments have an authentically monstrous tone, and they’re used as weaponized devices for the delivery of both high-throttle bone-sawing rampages, electrifying gallops, and slower, gruesome crawls, while the vigorous battering delivered by the drumwork is merciless, as are the wild, roaring and howling vocal tirades.

Apart from these gruesome delights, the song is possessed of spine-fracturing grooves and irresistible melodic (meat)hooks, and the soloing is both white-hot and spectral.

This kind of old school death metal will never go out of style… as long as there are people as devoted to its cause, and as masterful in carrying the tradition forward, as Sentient Horror.

Of this new song, Matt Moliti told us: “This was the first tune I wrote for the EP. I wanted something catchy that was still a brutal ripper of a tune. It takes some cool turns and I really dig the twisted guitar harmonies in the bridge.” We dig it, too.

The Crypts Below was mixed by Damian Herring (Horrendous) and mastered by Dan Swanö. It’s available in CD and vinyl formats through Redefining Darkness and Testimony Records via the links below. Digital editions will be available worldwide through iTunes, Spotify, Apple Music, Google Play, Tidal, Bandcamp, and more.

2 Responses to “AN NCS PREMIERE: SENTIENT HORROR — “BLED DRY BY THE NIGHT””