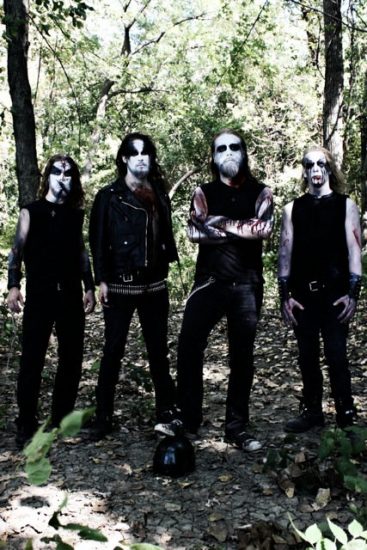 (This post marks the beginning of what we expect will become a regular Saturday column at NCS, penned by Andy Synn.)

Today sees the debut of a brand new column here at NCS, one which I hope will end up being an ongoing feature, designed to bring some attention to one of the most underappreciated aspects of the metallic arts… the lyrics.

Every Saturday from now until… well, until I run out of options (or impetus)… I plan to publish a new entry of this column, which will provide a different band/writer a chance to talk about the inspirations and process behind their lyrics, as well as some insight into selected songs of their choosing.

So, without further ado, I present the very first edition of Waxing Lyrical, featuring Michael Cook of A Hill To Die Upon!

Between my brother and I, I was always the big reader. I was always reading. It was mostly fiction: sci-fi, fantasy, historical fiction, but plenty of straight history too. My parents had to tell me things like “it’s rude to read books when we are out having dinner.” I would even read books during band practice. They always encouraged me to write.

So once we started playing music, I think my brother always kind of expected me to start writing lyrics. Rush was always a family favourite, so it never seemed odd for the drummer to write.

Of course, the first lyrics I wrote were pretty awful. They were more of a collection of what I thought were cool sounding sentences.

Adam was pretty gracious about not using them at first but really never said they were bad. He just told me to keep writing. In fact AHTDU was a band for about five years before I became the main lyricist.

These days I write the majority of the lyrics, but my brother still has a lot of input when it comes to the themes and ideas. We usually talk for several hours, several times, discussing ideas before I start penning anything at all. However, he has been adding more and more lyrics over the last couple albums.

Like I said, I read a lot. Usually, I’m flipping between two or three books at a time. I have found that any good poem, song, or book is going to have at least three elements braided together, so I try to weave in something about mythology, religion, and then whatever it is I’m actually writing about.

One thing I have noticed about any interesting literature is that the focus is generally on tension, rather than resolution. Saying “God is dead” is overplayed and boring. It is also stated as a fact. Facts are not interesting. Saying “the sky is blue” is true, but it is not interesting. You must show the sky to be blue if you are to be believed, but don’t ever say it. If God is dead, show it. Don’t say it. On the last mewithoutYou album, the line “this is not first time God has died” is repeated over and over. Also, it is sung by a Sufi Muslim. That answers question you didn’t know you asked, raises questions you thought were answered, and leaves you thinking for the rest of the album.

Our song “Nekyia” is probably the simplest example of a lyrical braid I’ve been able to produce. I wanted to write about World War I, but that is almost more of a vehicle than a subject for me. The nihilism caused by the cultural shell-shock – that is something I could write about. I borrowed heavily from WB Yeats’ image of the spinning gyre for my second element. The third idea I tried to bring into this song was the use of nekyia itself, which is a Greek ritual of speaking to the dead. You achieve this by digging a pit and pouring the blood of a ram in the bottom. It is supposed to attract the dead and allow communication. This sounded so much like a metaphor for trench warfare that I felt it a crime to not include it.

I still think “Amazing Grace” is one of the greatest songs ever written, along with Willie Nelson’s entire Red Headed Stranger album. I also connect with Hank II’s “Dinosaur” more than I’d like to admit. As for metal, the entire Demigod album by Behemoth changed the way I think about lyrics and heavy music. That whole album is gold, but the line “uncrowned in Tartarean sulphur / elder than the Memphian kings” still gives me chills.

When I started writing lyrics, I was most concerned with each line sounding cool and giving the illusion that it was deep. But on our last couple albums, I’ve actually been concerned with them actually being good (as if you could measure this kind of thing objectively). I feel like I am sufficiently unclear enough in my writing that I don’t worry about being too explicit. I like people having to dig for meaning. I just want to write good songs now.

The song “Prometheus Rebound” from Infinite Titanic Immortal is probably my first venture into trying to tie classical mythology and questions of religion and philosophy. Of course, western poets have been doing this for centuries. Poets like Yeats, Swinburne, and Shelley were the champions of the classics. My advisor for my English major at Monmouth College was mostly focused on 19th Century British poetry, so I was swimming in British poetry when we were writing Infinite Titanic Immortal.

The starting point was the liner notes for Behemoth’s “Prometherion.” Nergal kept comparing Prometheus to Satan. This comparison was made about two hundred years ago by Percy Shelley, and it is a solid comparison. However, if you know the story of Prometheus, you know that sacrificing himself to torment on behalf of humanity to assuage the wrath of a deity is a lot closer to Jesus of Nazareth than Satan. I feel like the desire for this comparison got the better of Nergal. So, “Prometheus Rebound” tries to draw that parallel. The title is a reference to Percy Shelley’s Prometheus Bound and Prometheus Unbound.

I was particularly happy with the evolution of the song “Sorcery and Sudden Vengeance” from Via Artis Via Mortis, as I was able to weave together questions of religious orthodoxy, along with references to military history and C.S. Lewis’ The Chronicles of Narnia (which are some of the highest quality fiction works you can find on this planet).

I have heard many people describe a desire to believe, a desire to not, and almost everything in between. However, I have never known a person who did not believe say that they wished a god to exist in any real earnestness. Thus the lines:

May I curse god and die?

Or would lightning strike me to the ground?

I would gladly feel its burn on my face

If then I could see Jehovah come down.

I wanted to explore the tension of this idea and leave the listener without a clear answer.

If you want to write, or improve as a writer, my advice is just to read a lot and write a lot. I just hit my goal of five hundred songs, and that was a result of constant reading and practicing of my writing. And as for recommendations, I’d say you should check out anything by C.S. Lewis, Jordan B. Peterson, and William Butler Yeats.

2 Responses to “WAXING LYRICAL: A HILL TO DIE UPON”