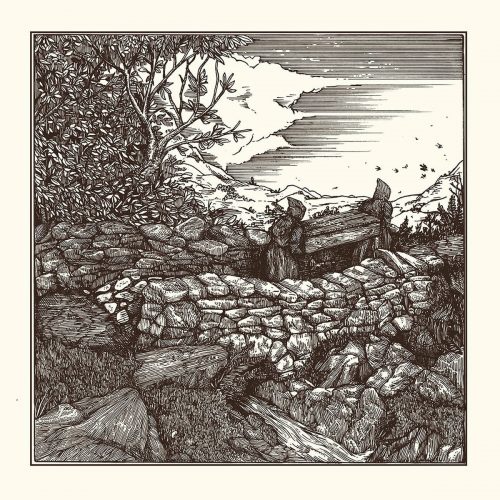 (Andy Synn continues our new regular Saturday series in which he discusses metal lyrics with bands whose music you should also get to know if you don’t already.)

Having recently dropped one of the most vital and visceral albums of 2018 so far, an album which I fully expect to make an appearance on numerous “Best of…” lists come the end of the year, Conjurer are currently riding a wave of popularity and critical acclaim which seems unlikely to die out any time soon.

So now seemed like the perfect time to grab hold of the band’s guitarist/vocalist Dan Nightingale and get him to spill the beans about his writing process, inspirations, and all that jazz.

I started writing lyrics when I was really young, a few years after I got my first guitar, so I must have been about 10 or 11. I hadn’t figured out how to write any music, but I would get lyric ideas for not-yet-written (or ever TO be written) songs in my head and jot them all down into either a Word document or a notebook. Pretty much all of them were about zombies.

I also used to come up with my own lyrics to other band’s songs– “Hang ‘Em High” by My Chemical Romance being the only one I can think of off the top of my head– which I loved doing because it was like I had a fully fleshed out song to write to.

Eventually I thought “I should probably actually TRY to write some music of my own”, and realised how much more rewarding it was to come up with my own backing track, essentially, to sing whatever rubbish I wanted over. It’s just been a process of writing (definitely) better music and (hopefully) less cringeworthy lyrics ever since!

Brady (Deeprose – guitars/vocals) has written lyrics to my material as well as his own, the same goes for Jan (Krause – drums), and even if all (or the majority) of a song’s lyrics are mine, they both at the very least help out with phrasing and wording.

Sometimes I’ll have a very specific idea in my head that I’ll want to write by myself, maybe for a personal song, but more often than not, I go to those guys for their suggestions and I’m really glad that I can do that.

I have trouble finding the right words a lot of the time, whether on paper or in person, so getting those extra and different perspectives is always helpful, especially from such articulate and incisive people as them, who understand what I’m trying to say as well as what they think the song requires.

Like a lot of people I could be watching a film and all of a sudden get an idea from a setting or a character or a line of dialogue, or I could be listening to a podcast or audiobook and be inspired by someone’s story or way of thinking. I take bits and bobs of people, places, of course artists and albums, and they can be things that you might not expect to influence the aspects of our music that they do. So for instance, a monologue could be more influential to a musical phrase than it would a lyric, or the mood of a certain scene in a film could help me figure out what words to jot down.

I remember, back when I was in my old Metalcore band, I was watching Evil Dead II and there was a particular part where all the characters were inside the cabin and slowly edging towards a window, when all of a sudden some thunder and lightning started. I noticed the pattern of the thunder was quite percussive and repetitive (there was a long “beat” followed by three shorter ones, which then repeated) so I remembered the pattern and played it on my guitar, treating the first “beat” as an open chord and the shorter beats as chugs. I expanded on it a bit and that became the intro to one of our songs.

You never know what will influence you, how it will take shape, or when that inspiration will come. I may have a line or two saved into a notepad app on my phone that will serve as a foundation to build on, but it will often take me until both the concept and the music are near the stages of completion until I can use those couple of ideas to springboard off.

I’ve always loved how cryptic yet profound John Baizley’s lyrics are, where you won’t have any idea what he’s on about but you’ll still have a strong image in your head whenever he sings. And while I’ve always loved archaic language, something that I was introduced to via Trevor Strnad’s lyrics, but where his work read like occult-obsessed Edgar Allen Poe novellas, Baizley‘s stuff has always felt so much more majestic, triumphant, and almost ancient, as if scrawled into parchment.

“Curse with me, profane and discreet / Make her move, cross veins and chamomile
Soft and sweet, seasalt silver-meat / Buried deep in crowskin overcoat

Save your breath, this may be the last / There is no novelty here on the earth

O’saviour! / There’s rotgutted whiskey in ladles
For to ease the pain or drown away

From when I started writing music until around the time I left college, all my lyrics were fantasy-based. The people I was playing with in that span of time were all influenced by the same sorts of artists (Trivium, Killswitch Engage, Sylosis) so I kind of developed a knack for writing quite embarrassing metal lyrics. It was fun writing that sort of stuff, but once I left college, I began writing more personal lyrics, something I’d never really done before.

It wasn’t a conscious decision to make that change, it’s more that the bands I was in around that time had all dissolved or were dissolving, my music taste was broadening, I was meeting new people and going to different places, things like my mental health were changing, and so ultimately writing conceptual songs about shipwrecks and religion and science fiction just didn’t cut it anymore.

I’ve not completely abandoned that way of writing — there are songs on our album that were inspired by the hadepelagic zone and old English folklore; I still love topics that instill a strong sense of imagery, but there’s more of a balance now and I feel I’ve gotten better at both introspective writing and allegorical writing.

I’m gonna go with “Behold The Swine” because it’s the first song Conjurer ever did and it’s one I’ll always be proud of lyrically.

The whole song is written from the perspective of an accuser; someone trying to rally people up for a witch hunt…

“Witness the cur as he cowers before all of you,

But be warned, beneath his meek guise is a devil.

Upon him cast your stones!”

…but when it gets to the chorus, the lyrics change from the initial perspective and become damning of the accuser themselves, as if their conscience is telling them

“And it time you will learn that this creature you condemn
Is no less of a human than you have ever been.”

I really got into the Ken Russell film The Devils around the time I was writing it and, along with the documentary West Of Memphis, I was caught up in the whole idea of someone being wrongfully and strategically victimised based on personal and political agendas. Of course I’ve never experienced anything as horrific as what happened to the subjects in those films, but one thing I empathised with was how the subjects were labelled, stereotyped, and persecuted under an antiquated and dangerous mob mentality, all because of the lack of understanding from a higher power.

It’s a tale as old as time that I think most people have experienced in one form or another.

At the time I was writing them, I was just coming out of a really low period where I wasn’t in a very good place mentally, and I was trying to make sense of why I was feeling the way I was. I was so confused as to why someone as fortunate as myself was having destructive and crippling thoughts and was trying to figure out where they had come from.

“I’ve had everything fall at my feet yet I’ve nothing to offer;
A life filled with love that has none to repay.”

I used to say I didn’t like writing lyrics about myself because I never thought anything bad enough had happened to me to warrant dedicating an entire song, but it got to the point where I needed to be as open and transparent as possible, and if putting it all into a song could’ve helped, I was going to do it.

I was apprehensive about the lyrics initially because I was worried people would take them at face value, whereas the whole process has been cathartic for me and helped get me to a better place mentally. It seems like a small thing, just writing a song about how you feel, but I knew if I didn’t do it, I would have been preventing myself from doing something crucial, and to have Brady turn around and say he knew exactly how I felt and explain it all back to me gave me that much-needed reassurance.

Being in this band is great, hopefully it will get greater, and you should all listen to The Ark Work by Liturgy – it’s better than you might think [Andy – lies!].

Anyway, I’m going to go and listen to Red Album and Blue Record back to back now!