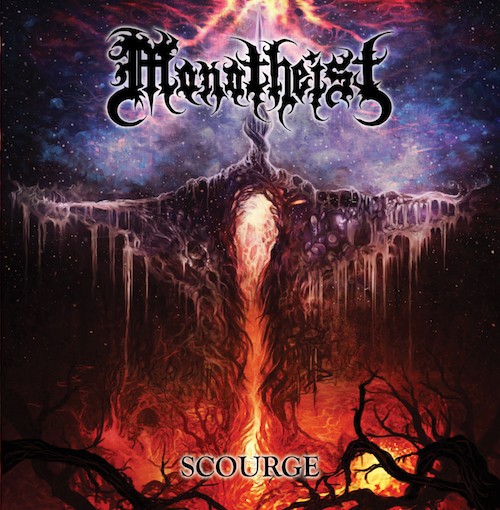 (We present Andy Synn’s review of the debut album by Monotheist, which is out now on Prosthetic Records.)

I must admit, until yesterday I was torn between two albums over which to focus my attentions on next, with my choices split between Occultaclysmic, the upcoming fourth album from resurgent South Carolina savages Lecherous Nocturne, or Scourge, the recently-released debut full-length from much-hyped Prosthetic Records signees Monotheist.

And although, ultimately, my decision was made much easier upon finding out that one of our guest contributors had already submitted a review for the former (a review which, at the time of writing, I have yet to read), the truth of the matter is that I was already leaning strongly towards the latter, if only because while Occultaclysmic is easily summed up as a solid (though not stellar) slab of post-Cryptopsy brutality still struggling to define its own identity, Scourge is much harder to categorise in similarly simple terms, making it, paradoxically, much easier (and more fun) to write about. 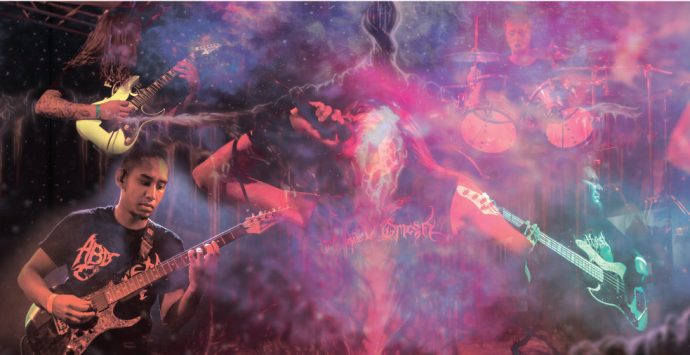 On the one hand I can’t imagine anyone but the most jaded and demanding of Prog/Death aficionados not finding at least something to love here, as tracks like darkly devastating opener “The Grey King”, the pulverising-yet-proggy “Scion of Darkness” (which we were fortunate to premiere here last month), and the atmospherically evil “Desolate, It Mourns Before Me” all offer a veritable rollercoaster of rampaging Death Metal riffs, livewire melodic licks, and unexpected progressive twists, while the truly monstrous “The Great Chain at the Neck of the Earth” might just be one of the best songs I’ve heard so far this year.

On the other, however, Scourge also has more than its fair share of flaws which, although neither individually or collectively capable of ruining the album, have certainly become more and more apparent the longer I’ve sat with them.

For one thing, and despite certain protestations to the contrary which I’ve seen elsewhere, the band’s sound isn’t particularly unique, and anyone familiar with the works of Allegaeon, Enfold Darkness, and The Faceless will certainly be well within their comfort zone (giving credit where credit is due, however, it’s worth noting that Monotheist do inject several of their songs with a heftier dose of “pure” Death Metal heaviness, which certainly helps differentiate them somewhat from the bands mentioned above).

But while that’s not necessarily a deal-breaker (and could, given the quality of those bands mentioned above, even be considered a compliment), it’s actually the moments where the band try to do things differently where thy stumble most frequently.

Largely this is because several of their more “progressive” moments just don’t seem to gel properly with the rest of the music. From the forgettable semi-symphonics of “The Image”, to the disconnected instrumental ending of “Abominable Acts” and the kooky intro to “Scourge” (which is, arguably, the most disjointed and derivative song on the album, although still not without its charms)… none of these seem like particularly natural additions, and give the impression that they were pulled wholsesale from “The Big Book of Prog Metal” without much effort to properly integrate them with the rest of the music.

Being willing and able to criticise something doesn’t mean you can’t enjoy it, however, and, for the most part at least, Scourge is still an eminently enjoyable album — often intriguing, frequently impressive, occasionally exasperating — and one that I can still see myself going back to in the future in spite of its flaws.

And while it may not be the groundbreaking, career-defining musical statement which the band may have intended it to be (and might even have worked better split into two separate EPs, as the instrumental odyssey of “Infinite Wisdom” really does seem to demarcate a clear point of division within the album’s overall flow), the band’s debut still shows a lot of promise and potential, particularly when they knuckle down and focus in on the heavier, harder-hitting aspects of their sound, and should provide a firm foundation for further growth and development going forwards.