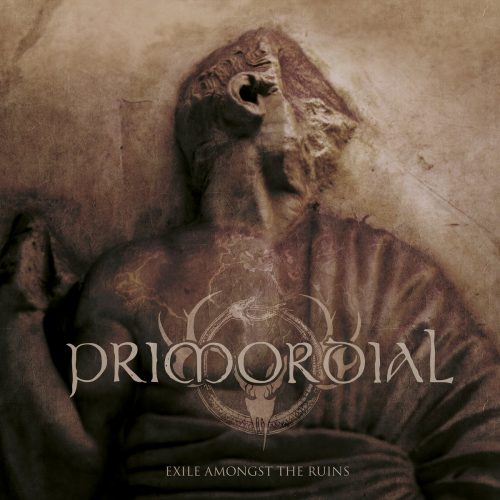 (On March 30th Metal Blade will release Primordial’s new album, and Andy Synn reviews it below.)

Success, or so they say, can be a double-edged sword. And, if the reviews I’ve seen thus far are any indication, this is something that Primordial are finally discovering with the release of their ninth album, Exile Amongst the Ruins.

On the one hand are those people who have seen fit to declare this album a “masterpiece”, a “superlative triumph”, a “stunning success”, before they’ve even properly heard it, content as they are to blindly believe that the Irish quintet can do no wrong, while on the other are those whose reaction to Exile… can perhaps best be summed up as “slightly unhinged”, castigating the album as a titanic disappointment because it fails, in their estimation, to live up to the extremely high standards of their very best work.

And, of course, since so much of today’s music press is dedicated to the pursuit of exaggeration and excess over clarity and nuance, these voices have been amplified to the point where you’d be forgiven for being convinced that this album is either the best thing ever written, or the absolute worst… and nothing in between.

But the truth, unsurprisingly, is more complicated than that. 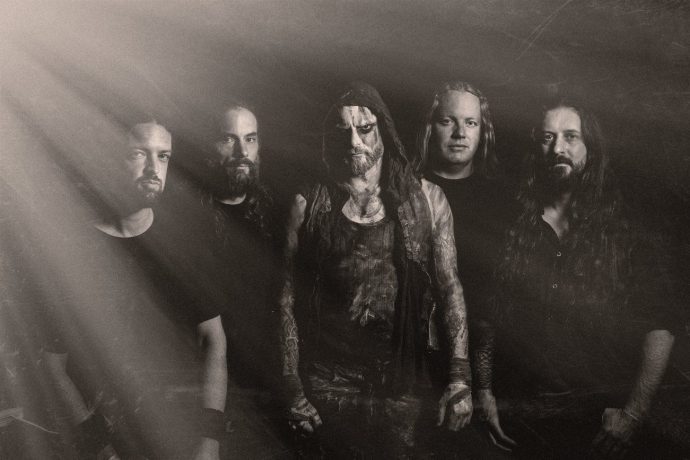 If you’ve read anything about the circumstances surrounding this album’s gestation and creation then you’ll no doubt be aware that it was conceived and recorded in much more difficult, much more stressful, conditions than its predecessor, and this certainly shows at times, not just in the raw, rough-around-the-edges, feel to things, but also because several of the songs are presented in what seems like an unrefined, and unedited, form.

But while this nagging sense that Exile Amongst the Ruins never quite manages to fulfil its own potential is hard to ignore, that doesn’t make it the colossal failure that some people might have you believe, as these eight tracks still contain more than their fair share of intriguing elements, as well as a handful of real gems.

Opener “Nail Their Tongues”, for example, may not be the strident call to arms which the listener might have expected (as a matter of fact the entire album is a far more subdued, and less bombastic, affair than you might have supposed), but its slow-burn transformation from a doomy, Sabbath-style creep into a furious, Bathory-esque gallop, is a rewarding one all the same, while the evocative, atmospheric “To Hell or the Hangman” is one of the album’s early standouts, and strongly reminiscent of Sólstafir at their brooding best – though perhaps this isn’t all that surprising considering that the two acts share both similar roots and a similar musical outlook.

The sombre “Where Lie the Gods” provides a doomier take on the traditional Primordial formula, complete with some great variance between riveting riffs and mournful acoustic guitars, and gives Averill a chance to stretch his prodigious pipes to predictably potent effect, and while there’s an argument that his reliance on familiar themes and lyrical markers has become something of an albatross around the band’s collective neck, you can’t deny the obvious passion and emotion underpinning his delivery, both here and during the moody, melodically textured title-track.

The second half of the album, however, doesn’t fare nearly as well as the first, with only the sublime “Stolen Years” (which, again, bears more than a passing resemblance to the band’s Icelandic brethren) standing out as something truly special… although the prominent leads and shifting drums of “Sunken Lungs” certainly make an admirable attempt at grabbing the listener’s attention, even if they ultimately can’t hold onto it for the song’s full length.

But while the rather stock “Upon Our Spiritual Deathbed” and ponderous closer “Last Call” fall a fair bit short of the band’s best, to suggest that Exile Amongst the Ruins is somehow the lowest point of the band’s career thus far seems, at best, excessively hyperbolic and, at worst, downright disingenuous.

Perhaps one reason why this album has been receiving such wildly polarised, and frequently negative, reactions, is that it’s very much a grower, not a shower, and requires a fair bit of patience to fully appreciate.

Personally I find it to be a much more interesting, and likely to be a much more long-lasting, album than the rather generic Redemption At The Puritan’s Hands, although I’m very much aware that my opinion in this area is somewhat divergent from the norm.

In conclusion then, I won’t say that Exile… is the band’s best album, nor is it their worst. Not everything has to be either one or the other, after all. But I will say that it’s likely to go down as perhaps the most divisive work in the band’s repertoire, loved by some, loathed by others, but impossible to ignore either way.

14 Responses to “PRIMORDIAL: “EXILE AMONGST THE RUINS””