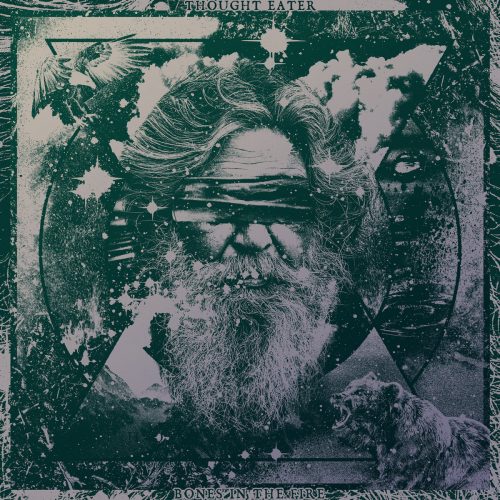 Prepare yourselves for a thoroughly engrossing, mind-altering, well-off-the-beaten path experience.

The long beguiling track we have for you is named “Covenant“, and it comes from Bones In the Fire, the debut album by the Baltimore-based instrumental trio Thought Eater. This is the group’s second release overall, following a 2016 split with Iron Jawed Guru, and it will be released by Grimoire Records on May 18th.

And before you scoff at the idea of falling into the grip of a purely instrumental track that’s nine-and-a-half minutes long (we know some of you need a steady diet of un-clean vocals), give me a minute to convince you that this is worth all of those minutes and seconds.

By way of brief background, Thought Eater’s triumvirate consists of guitarist Douglas Griffith, drummer Bobby Murray, and 12-string bassist Darin Tambascio (a founding member of the prog-metal two-piece National Sunday Law and Graviton, which featured both members of NSL and Sacha Dunable from Intronaut). For this album, the instrumentation further includes selective use of 12-string acoustic guitar and synths.

Moving right along to “Covenant“: It is a mercurial experience — black-eyed and brooding, ranting and raving, gliding and gleaming, soft and alluring. One might go so far as to call it hallucinatory as well. With these changes of mood come changes in tempo and volume, as well as greater and lesser degrees of intricate instrumental interplay.

Slow, distorted, bass reverberations begin the trip, pushing the light from the listener’s mind and replacing it with gloomy shadows. You might experience a jolt when a rapid, battering drum rhythm leaps forward and notes slowly spear upward and ring outward. And that’s just the first of many changes to come, followed by a switch of rhythm to a snapping and tumbling cadence and the emergence of a big, python-thick riff. Unearthly shining tones and torpid, moaning bass sounds reappear, along with some heavy-as-hell pile-driving… and a finale that’s as dreamlike and mesmerizing as the beginning was doom-stricken.

Well, that may have taken more than a minute to read, but hopefully it will at least prove sufficiently intriguing to induce you to press play.

Bones in the Fire was recorded, mixed, and mastered by Grimoire’s Noel Mueller, and features artwork by Andrew Notsch. You can pre-order it at Bandcamp, where you can also listen to two more tracks from the album; it will also be made available through Spotify, iTunes, and Amazon mp3.

One Response to “AN NCS PREMIERE: THOUGHT EATER — “COVENANT””