(On May 18th Season of Mist will release the hotly anticipated (and thoroughly remarkable) second album by Alkaloid (which is now available for pre-order HERE), and today we are delighted to present the premiere of a track from the album as well as Andy Synn’s extensive review of the record, all of which he introduces with a bevy of comments from members of the band.)

So I originally wrote this review last month, and expected it to be published… well… then.

However, just prior to publication, we were offered an exclusive track premiere, and I was asked if I minded holding off on publishing for a little while so that things would line up better. And, of course, I said fine, because I’m nice like that.

Now the song in question, “As Decreed By Laws Unwritten”, is one of the heaviest, and most purely Death Metal tracks, on the entire album, and one of the few which fits with our site name, in that it features… no clean singing.

It’s also one of the songs written entirely by guitarist Danny Tunker, as he explains here:

“This was the second song I wrote for Liquid Anatomy. When we first started sending demos and talking about songs, we felt we needed some heavier songs. We had the title track, which is a ballad, and “Kernel Panic”, which didn’t have a heavy section yet, and another song I wrote, which was a mellotron-driven prog-ballad at that point and turned into “In Turmoil’s Swirling Reaches” later. As a result, Florian wrote “Azagthoth” and I wrote “As Decreed By Laws Unwritten”.

“Most of the song was written in one sitting in a hotel room, but after it was conceived it went through various incarnations, with a full-on flamenco part and even a string section. When I completed the lyrics I chose to drop those sections in favour of the desolate atmospheric section that’s there now.

“This song also marks my singing debut with Alkaloid. I’d never done any screaming or harsh vocals, but since I had a clear idea of how I wanted the vocals to be I just demoed them at home. We found out that my voice blends quite nicely with Florian’s, so for this album I’m providing backing vocals on most songs.

“I’m extremely happy with how this song came out. Recording the rhythm parts over Hannes’ ultra-heavy groove was one of my favourite moments in the making of this album.”

Speaking of Hannes Grossmann, the drummer has his own comment to add about this particular track:

“This was the last song I recorded drums for. Since we hadn’t rehearsed any of the songs before entering the studio I had to record pre-production demos in order to create the final drum line for all the songs. Everything needed to be in place and exactly worked out before I could start the actual recording process, which took about three weeks in total.
“Everything generally went pretty smoothly, despite the complexity of it all, however this was the song where problems started to arise. At certain points towards the end of the track I suddenly just sounded really bad, because I was just so tired from the ongoing recording process. Luckily there was only one part left, but it just wouldn’t work the way I wanted. No matter how hard I tried, the groove just felt wrong. After hours of trying to get what was a relatively easy part down, time started running out, because I had a trip to Nepal booked right after the drum recording. I’m an enthusiastic hiker and I knew I would need a break after the recording!

“But the recording wasn’t done and my plane was scheduled to leave the next day. So I left the drums miced up (owning a recording studio is SO beneficial), packed my bags, and flew to Kathmandu, where I hiked to the amazing Annapurna base camp at 14,000ft, and left all my stress and worries back in the studio.

“And then, after I came back, I just sat down behind my kit, hit record, and pulled off that last missing part in the first take. Perfect groove, perfect timing, perfect feel. Sometimes just stepping aside can resolve major problems. Lesson learned!”

And before we get to the song itself (and then the review), we’ll conclude this introduction with a comment from Morean:

“This is the only song on the album doing justice to the phrase ‘No Clean Singing’ 😉 We all love the vibes of the slower tracks of a certain band from Florida, and even though this is very much our own work, I don’t mind the wink to them and all the inspiration their work has provided us and the world with over the years. And I applaud Danny’s approach to try and construct a whole song from basically one mosh part after another. I expect broken necks!”

And now you can check out our premiere of “As Decreed By Laws Unwritten” and then, if you’re in the mood, check out my full-length review of the album!

Truth be told, the majority of so-called “supergroups” are really just a way for already famous (or, at least, semi-famous) musicians to cash in on their collective celebrity while peddling whatever musical mediocrity they wouldn’t be able to get away with in their regular jobs.

But there are always exceptions to every rule, and Alkaloid is one of them.

Now let’s be clear about one thing – Liquid Anatomy isn’t necessarily a huge, tectonic shift away from its predecessor (assuming you’re familiar with The Malkuth Grimoire) but it’s undoubtedly an evolutionary step forwards, one which has resulted in a more ambitious and more refined album, which seamlessly fuses together a wider variety of unorthodox inspirations and unconventional influences into something that’s altogether stronger, sharper, and stranger than before. 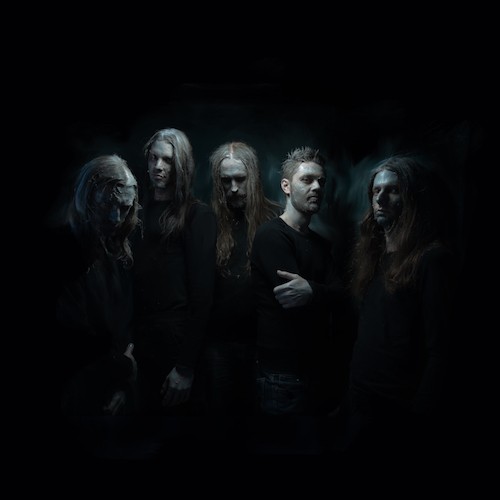 Take the album’s first track for example. Whereas most bands would probably choose to kick things off with an instant, attention-grabbing hit, “Kernel Panic” seems almost purposefully designed to challenge and confuse the listener, blending an extravagant array of proggy melodies and shamelessly strange hooks – think Pink Floyd, Rush, King Crimson, and even The Police– with explosive eruptions of blazing technicality and bruising heaviness, with little to no regard for the audience’s expectations.

It’s a ballsy, provocative move, make no mistake, and one which immediately sets the tone for the rest of the album going forwards.

As a result perhaps the best advice I can give you when going into this record is to expect the unexpected, as even the two most straightforward songs – the riff-heavy rager that is “As Decreed By Laws Unwritten” and the brooding prog-ballad of “Liquid Anatomy” – incorporate an array of unusual and unexpected ideas well outside of the normal range, while the exotic extremity provided by mutant metallic hybrids such as “Azagthoth”, “In Turmoil’s Swirling Reaches”, and the stunning space-oddity that is “Interstellar Boredom”, represent the band operating at a whole new level of experimental intensity and inspired lunacy. 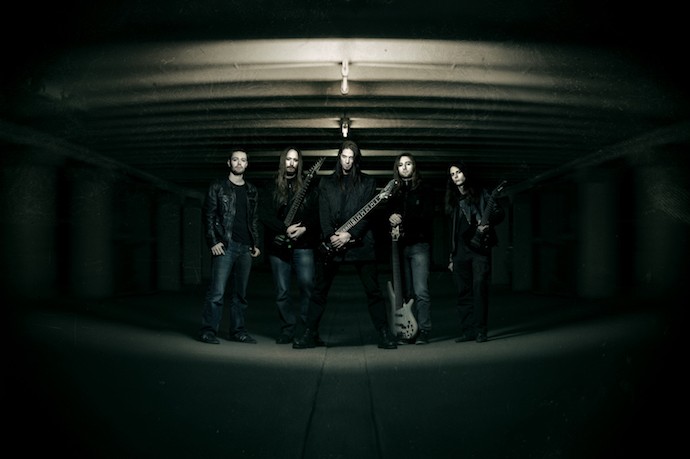 In truth this shouldn’t be hugely surprising, as every single member is an exceptionally talented musician (and I use that word in the truest sense) in their own right, and Alkaloid is clearly an opportunity for them all to experiment in ways which they wouldn’t necessarily be able to do in their other ongoing projects.

The pairing of Münzner and Tunker (with additional input from Maier) on guitar, for example, ensures that each and every track is capable of throwing down massive, megaton riffs, elaborate, technical fretwork, and esoteric proggy melody – often all at once – while the combination of Grossmann and Klausenitzer makes for one of the finest and most creative rhythm sections in Extreme Metal (and beyond), with both men displaying not just a keen grasp of dynamic but also a distinct flair for the dramatic, knowing instinctively when to push forwards and when to pull back for maximum effect and impact.

The vocals as well are just as enigmatic and elaborate in their own way. For while Maier has always been possessed of a rather prodigious growl, brimming with venom and vitality, it’s his clean vocals that often steal the show here (despite this being, ostensibly, a Death Metal album at heart), their sublimely surreal and bizarrely infectious delivery – cross-referencing demonology, abstract philosophy, and quantum mechanics – consistently defying easy analysis or categorisation.

Now, arguably the best song on the album is the bombastic “Chaos Theory and Practice”, which manages to be both punishingly heavy and phenomenally hooky, effortlessly extreme yet extremely progressive, all at the same time, and which finds the band constantly shifting shape and altering their angle of attack so as to always stay at least two steps ahead of the listener.

It’s a brilliantly composed piece (and breathtakingly performed as well) and, for most bands, would likely have served as the perfect album closer.

However, if it hasn’t already become clear, Alkaloid aren’t “most bands”, and instead made the mind-boggling decision to conclude Liquid Anatomy with an almost twenty-minute monolith of indulgent progressive excess by the name of “Rise of the Cephalopods”, which proves to be not only the band’s most ambitious artistic statement yet, but so ludicrously massive in both sound and scope that it deserves to be considered as practically an entirely separate entity unto itself.

Taking full advantage of its extensive length, “…Cephalopods” takes its time building both tension and atmosphere in equal measure, and this moody, slow-burn approach pays off handsomely over time, with nary a hint of heavy distortion to be heard for almost a full four minutes.

Slowly but surely, however, the riffs grow ever darker, the vocals rougher and more menacing, the drums more intricate and intense – the melodies remain as artful and abstract as ever, but the atmosphere begins to thicken with looming menace – until, by the time the track finally begins to wind down some fifteen or so tumultuous minutes later, it seems like the song has transformed and traversed practically every mile of the metallic spectrum several times over.

It is, quite frankly, both an exhausting and a compelling listen, and one which demands some real investment and attention from the listener if they want to get the most out of the experience. But then I suppose that could be said for the entire album! 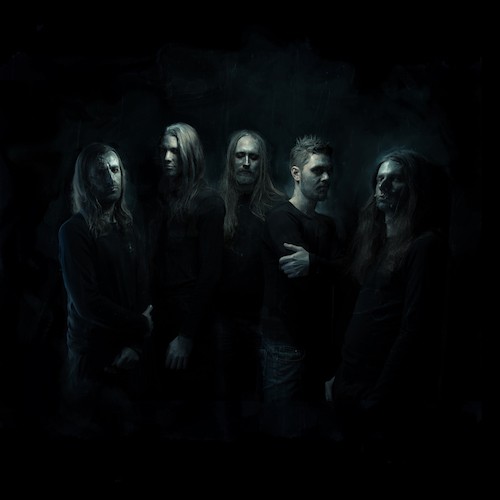 In the end, making a final, succinct analysis of Liquid Anatomy isn’t an easy task. After all, I’ve already expended almost a thousand words on it and still feel like I’ve barely scratched the surface.

Suffice it to say that if you loved The Malkuth Grimoire then, in all likelihood, you’re going to love this one even more, as it takes the blueprint laid down by that album and pushes it another few steps up the evolutionary ladder (and yes, I’m aware of just how mixed that metaphor is).

Of course if you didn’t hear its predecessor then you might well be caught a little off-guard by this album at first, as it rarely takes the easy route or the predictable path to its destination and, just as often, ends up somewhere entirely different than you might have been expecting.

But stick with it, as the potential rewards on offer far outweigh the risks here. At worst you’ll sacrifice maybe an hour of your time and be left with little more than a general sense of bafflement and bewilderment. But, if you’re very lucky, you’ll discover just how weird, how wild, and how wonderful an album like this can be when all the restrictions and restraints have been removed.

9 Responses to “ALKALOID: OUR PREMIERE OF “AS DECREED BY LAWS UNWRITTEN” AND OUR REVIEW OF “LIQUID ANATOMY””